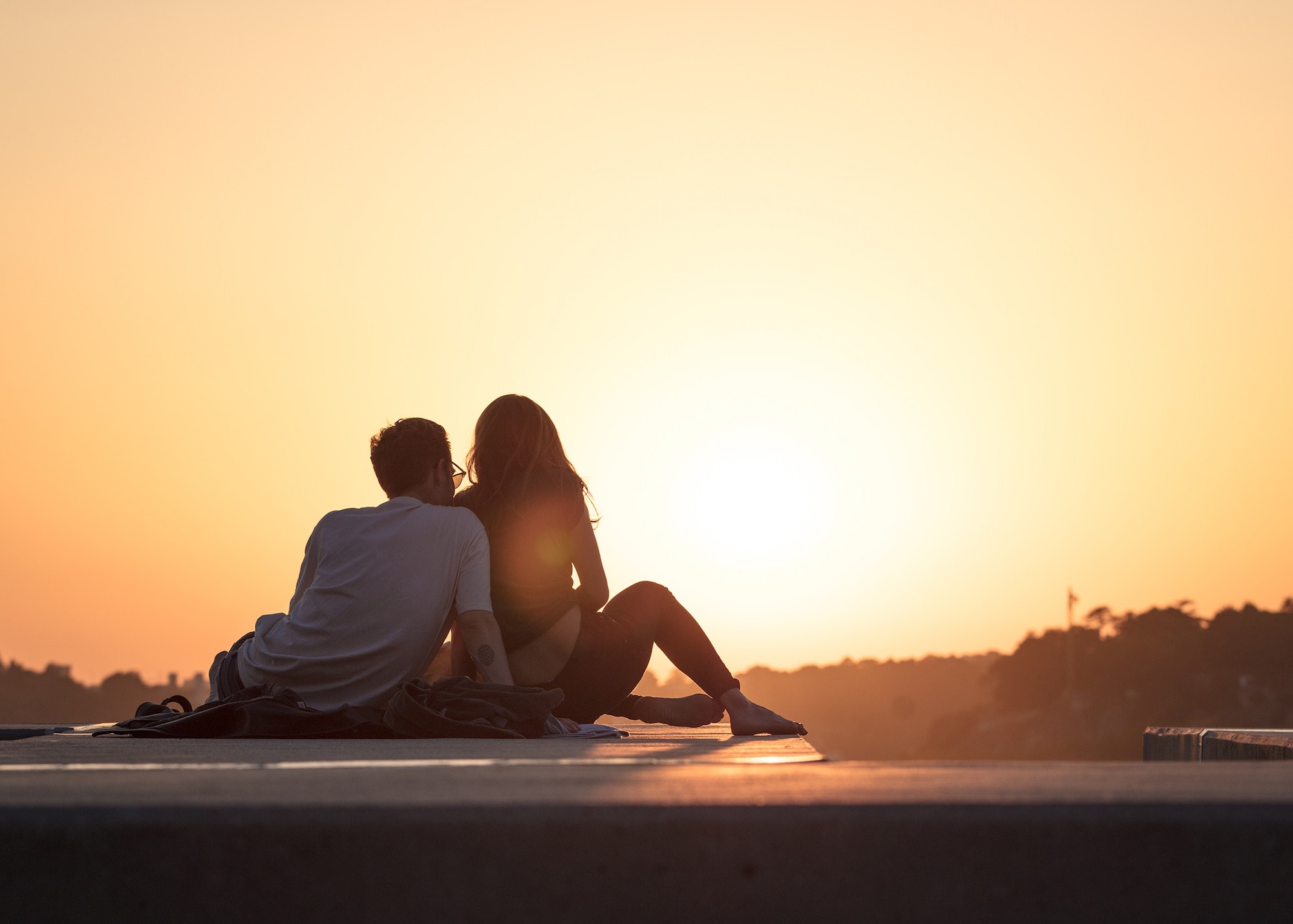 13 Places Philly Singles Can Get Lucky in Love This Summer

Maybe you’re coming off a recent break-up or simply bxeen single for a while, whatever the case may be if you’re looking for a little romance this summer there are tons of places in the city to find that special someone.  Yes, this will require you to logout of Bumble, Tinder or whatever apps you use and step out into the real world.  Have a a real conversation over drinks rather than swiping right on the couch.  It’s time to power down your smartphones and power-up your social life.  To help narrow down the places you should be hitting up this summer, we put together a small list to help jump start your summer dating adventures.  Below are 13 Places Philly Singles Can Get Lucky in Love This Summer.  However, we can only point you in the right direction it’s up to you to close the deal.  Good luck! 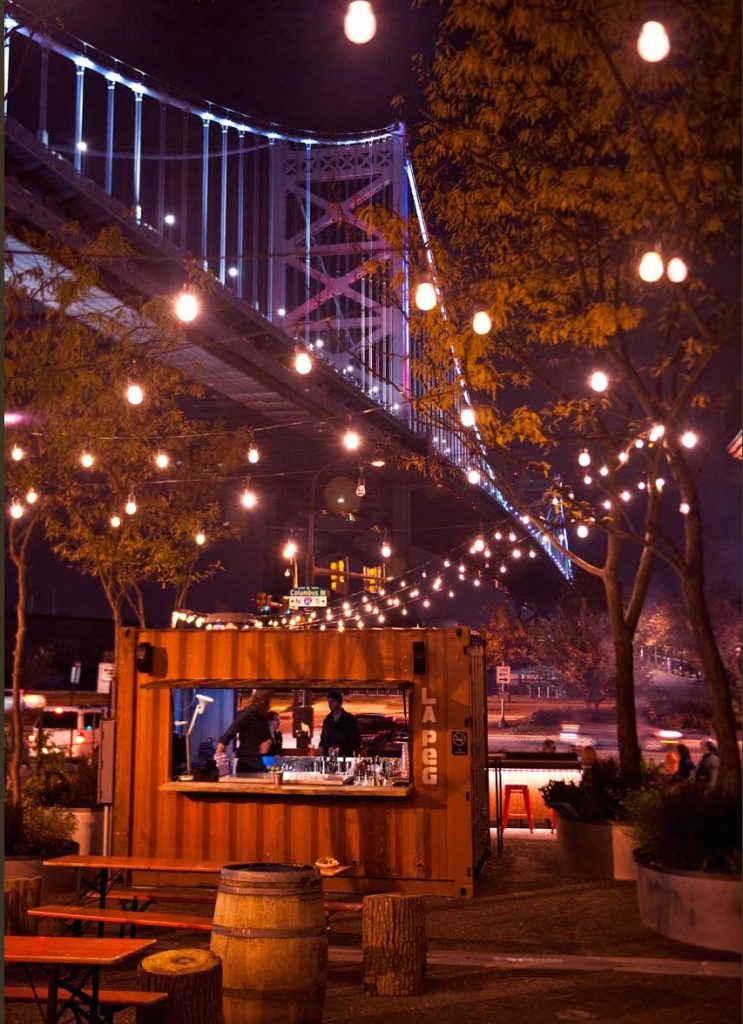 Perhaps you want to meet someone that appreciates the arts, architecture and a nice IPA.  Located within the FringeArts building, La Peg can also doubles as a theater experience as their 30×30 foot door open up into a 230 seat theater.  Plenty of cool performance art events take place here but the real kicker is their outdoor beer garden. Not too far from the hustle and bustle of Spruce St. Harbor Park, La Peg’s beer garden is where you’re more incline to fine someone who enjoys a chill scene and artsy vibes. 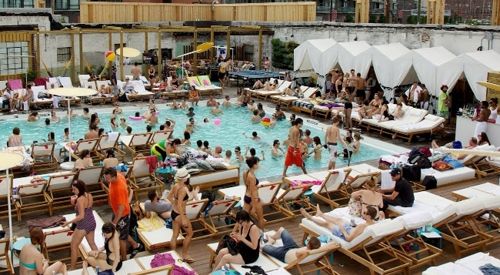 The former North Shore Beach Club is under new management with a few new surprises this summer including special themed nights and more public access.  This means more summer fun and a large dating pool to work with (you see what I did there?).  Quite simply it’s Philly’s best place to cool off this summer with a margarita and take in the scenery. 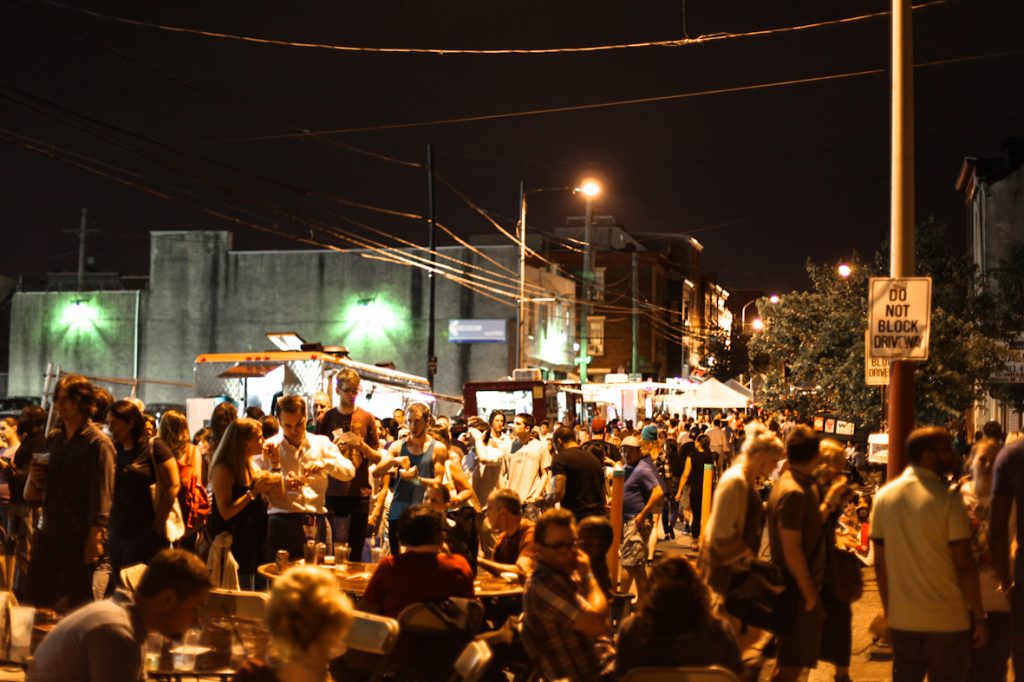 Sometimes you want someone to make you feel all warm and gooey like a bowl of Mac N’ Cheese from the Mac Truck.  Well if you want someone that shares your love of food, then hitting up the Night Markets would be your best best.  Although these things do get a bit crowded, it’s a great spot to strike up a conversation.  The food is the ice breaker and there’s plenty to talk about here. 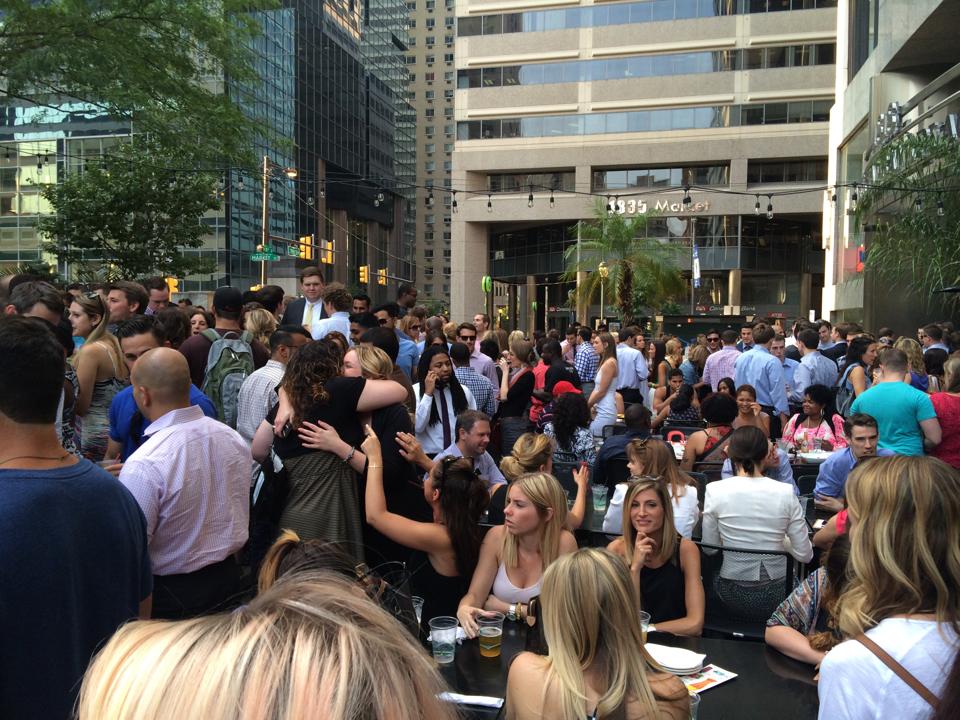 If you’re looking to score with someone but have a minimum requirement of having a job than maybe Sips is where you need to hang out.  Taking place every Wednesday in Center City all summer long, Starting June 1st until Sept. 28th, Sips is essentially one huge happy hour.  Instead of rushing home to binge on Netflix, folks take off their ties, untuck their shirts and let loose as music fills the air the liquor fills their cups.   Expect plenty of people in business casual and even suited up as this is a go to spot for folks to unwind after a long day at the office. 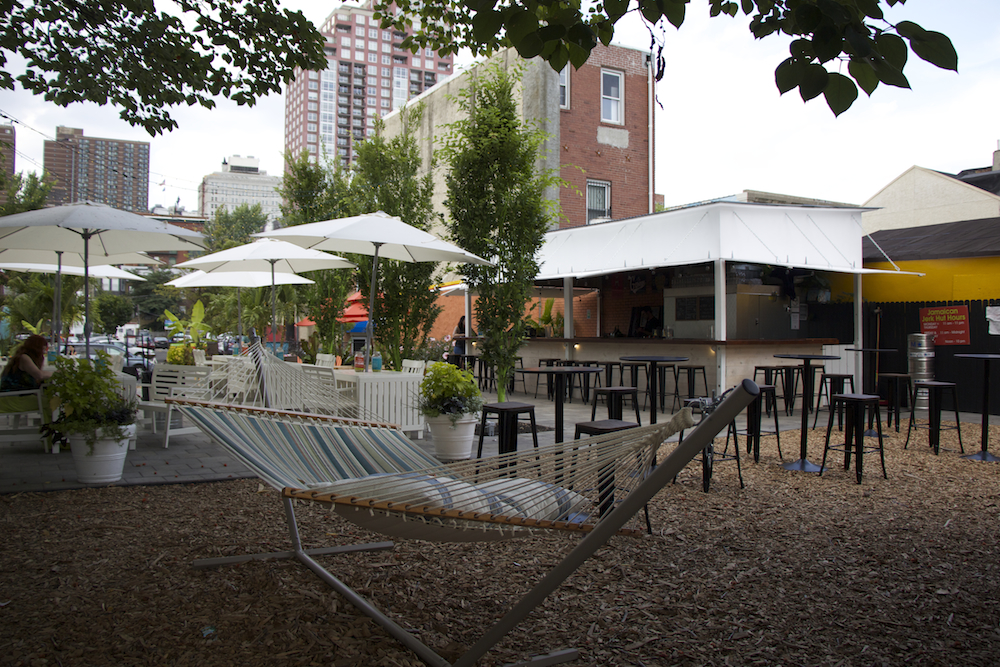 Every year the Pennsylvania Horticulture Society hosts several pop-beer gardens with different themes throughout the city.  Consisting of various themes, each park has its own vibe and character.  Overall each park is ultra laid back and there are plenty of break out spots to have private convos if you decide to step away from the crowds a little. Serving up beers, wines cocktails as well as food, all the elements are here to maximize mingling.  Here you’ll tend to fine more of a calm crowd that aren’t usually into the rah rah scene, so if you fit the bill you may find a potential suitor here.

This is the spot that most likely came to everyone’s mind when they read the title.  Perhaps Philly’s biggest summer draw, in fact last summer over 750,000 people visited the park.  That’s one helluva a potential dating pool.  There is no shortage of entertainment, food or drinks here.  Strike up a convo during life size Jenga, over cocktails at Garces or while hanging out on the hammocks.  Not to mention the night time views by the water set the mood.  As a bonus The Independence Seaport Museum next-door also has an outdoor bar for those looking for a less congested place to socialize. 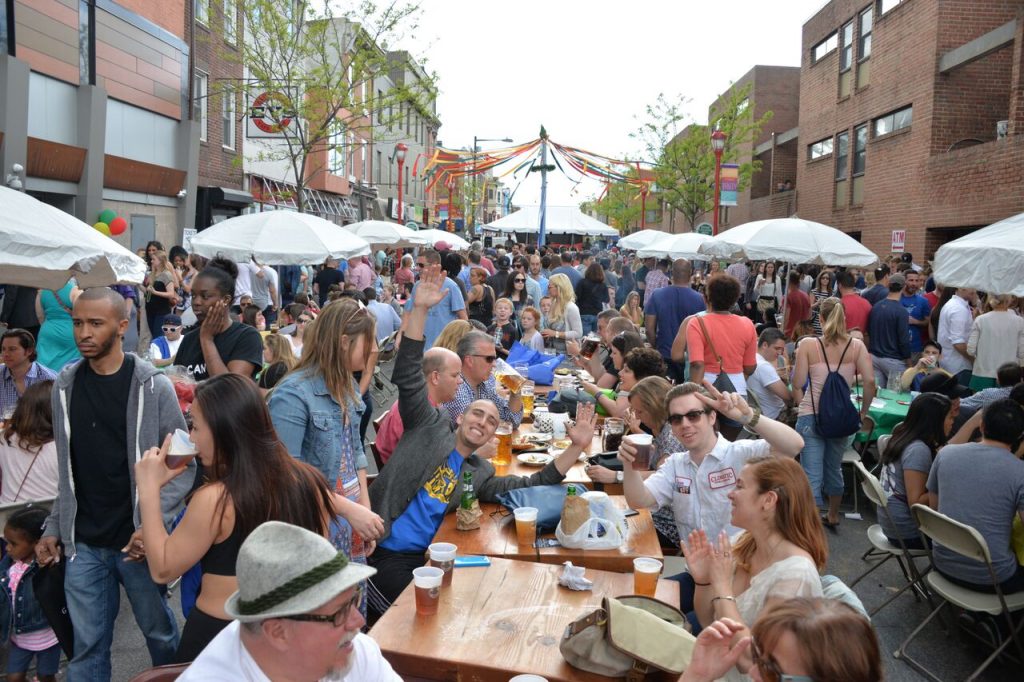 Whether it’s a food festival, art festival or really any festival for that matter, festivals are the perfect place to find someone that’s out going and enjoys the sights and sounds of the city. Depending on the theme of the festival it will be easy to bump into a cutie that shares the same interests as you.  Striking up convos at vendor tables is a great place to start or at any break out area where folks are just hanging out. 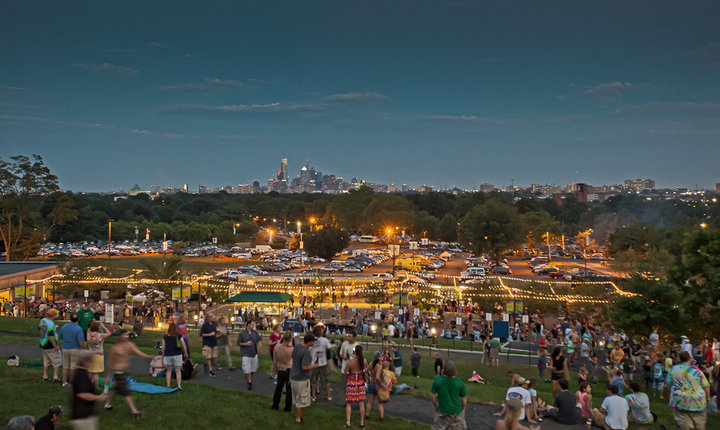 This is our sleeper pick.  Although Penn’s Landing has tons of festivals and concerts, The Mann Center just has a more grown-up air about it.  Hosting tons of artsy shows, music icons of yesteryear as well as movies, it’s one of Philly’s best outdoor venues that never gets the love it deserve.  However, singles don’t typically attend shows solo, therefore be sure to bring a wingman or wingwoman as many folks that aren’t on dates tend to come with a group of friends.  This makes it easy to engage someone that catches your eye. 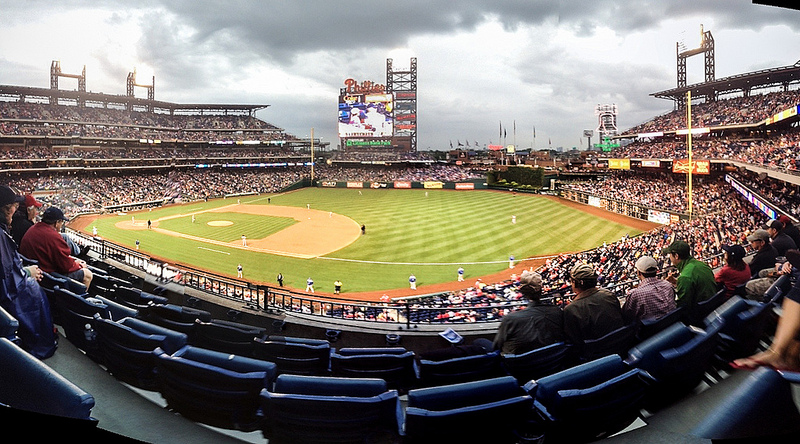 Surprisingly there are a large population of female Phillies fans to balance things out here so it isn’t totally a meat market.  So fellas this is a prime place to meet singles.  I mean you already have something in common plus the times between in innings and making food and beer runs, you’re bound to run into someone that’s right up your alley. Ladies of course the guys are in abundance here and what guy sports fan wouldn’t want someone to root for their favorite team alongside them. 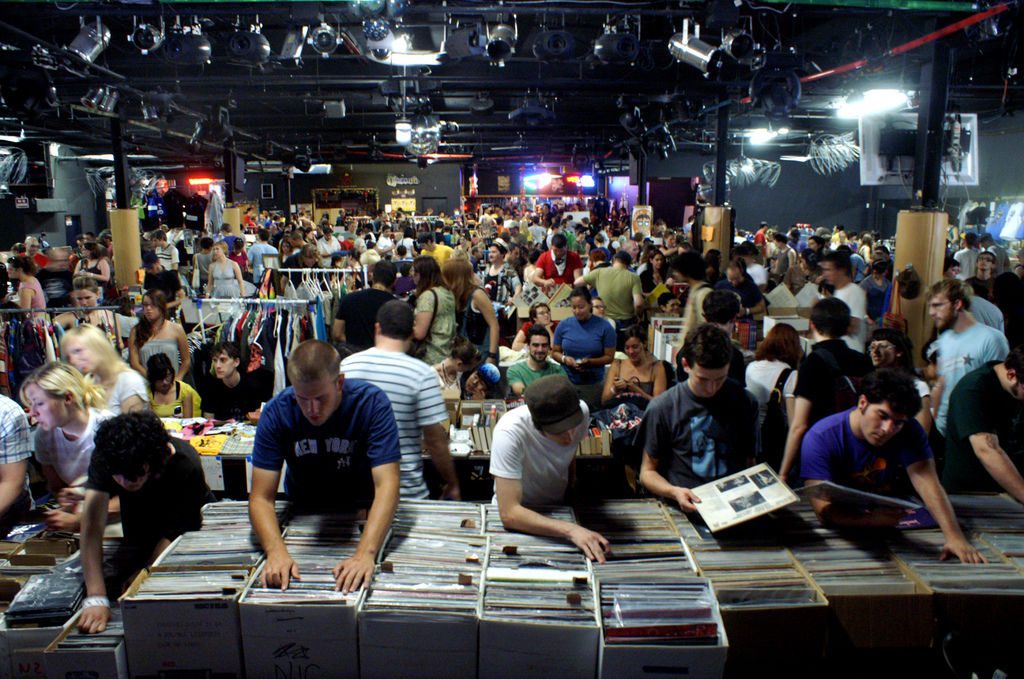 Flowers aren’t the only things that pop-up during the summer, outdoor flea markets have been growing in popularity.  Popular parks such as Spruce St. Harbor Park tend to host flea markets including the wildly popular Punk Rock Flea Market.   So for those looking for someone that is a thrifty spender, knows how to budget and isn’t a slave to designer labels, this may be a great option.  Not every place you need to go to in order to meet singles has to involve alcohol. 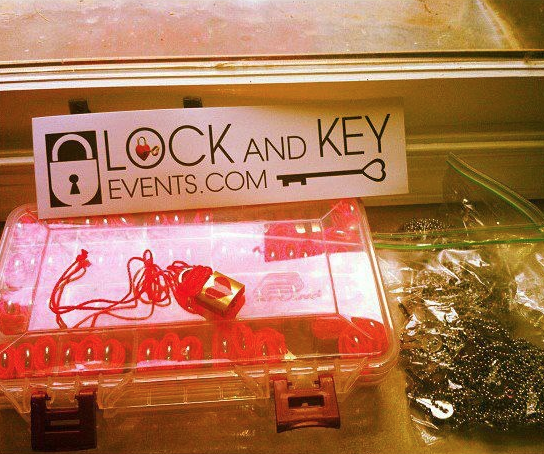 If clubs, festivals or public places in general are not really your thing to pick up someone, then go the traditional route.  One of our favorite dating services in the area is Lock and Key.  The organizers of this pop-up dating club have a cool twist.  Those who sign up meet at a designated location that is reserved just for Lock & Key participants.  Women are given locks and men are given keys.  As you make your way around the room mingling, the guys test to see if their key opens the lock.  If so then you’ve met your match and win a prize.  If not then you just have to keep working the room until either someone peaks your interest or until your key opens a lock. 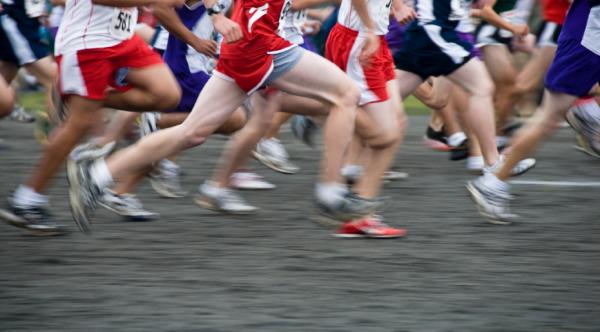 No really. Whether you’re already an in shape runner or new to the running world, marathons and running clubs are the perfect places to meet like minded people that are health conscious and goal oriented.  It doesn’t have to be anything major like the Broad St. Run, a short marathon you know one of those color runs or even a charity walk are all great places.  Running clubs are great too and often end their group runs at popular bars where fellow runners are able to mingle and share their love for the sport. 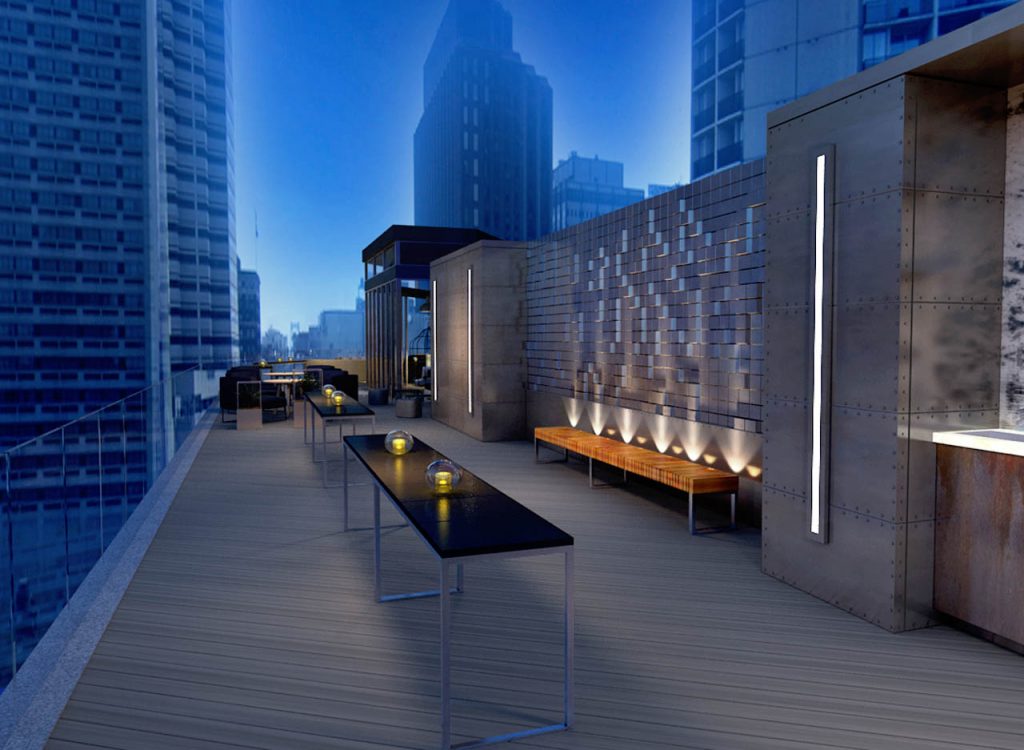 Classy. Up-scale. Gorgeous views.  Just a few words to describe Philly’s newest lounge.  Located atop of The Logan (formally Four Seasons) on the Parkway, The Assembly is the spot you go dressed to impress and ready to drop some coin.  We expect many of Philly’s “well-to-do” to frequent this place along with those just looking for a sophisticated spot to take in the scenery.  The views and ambiance will set the perfect mood for you to work the room and find someone that peaks your interest.

Continue Reading
You may also like...
Related Topics:dating, philly singles

6 Cool & Useful Things You Can Do With Empty Wine Bottles!
8 Tips For Out-of-Town Freshmen to Thrive in Philadelphia