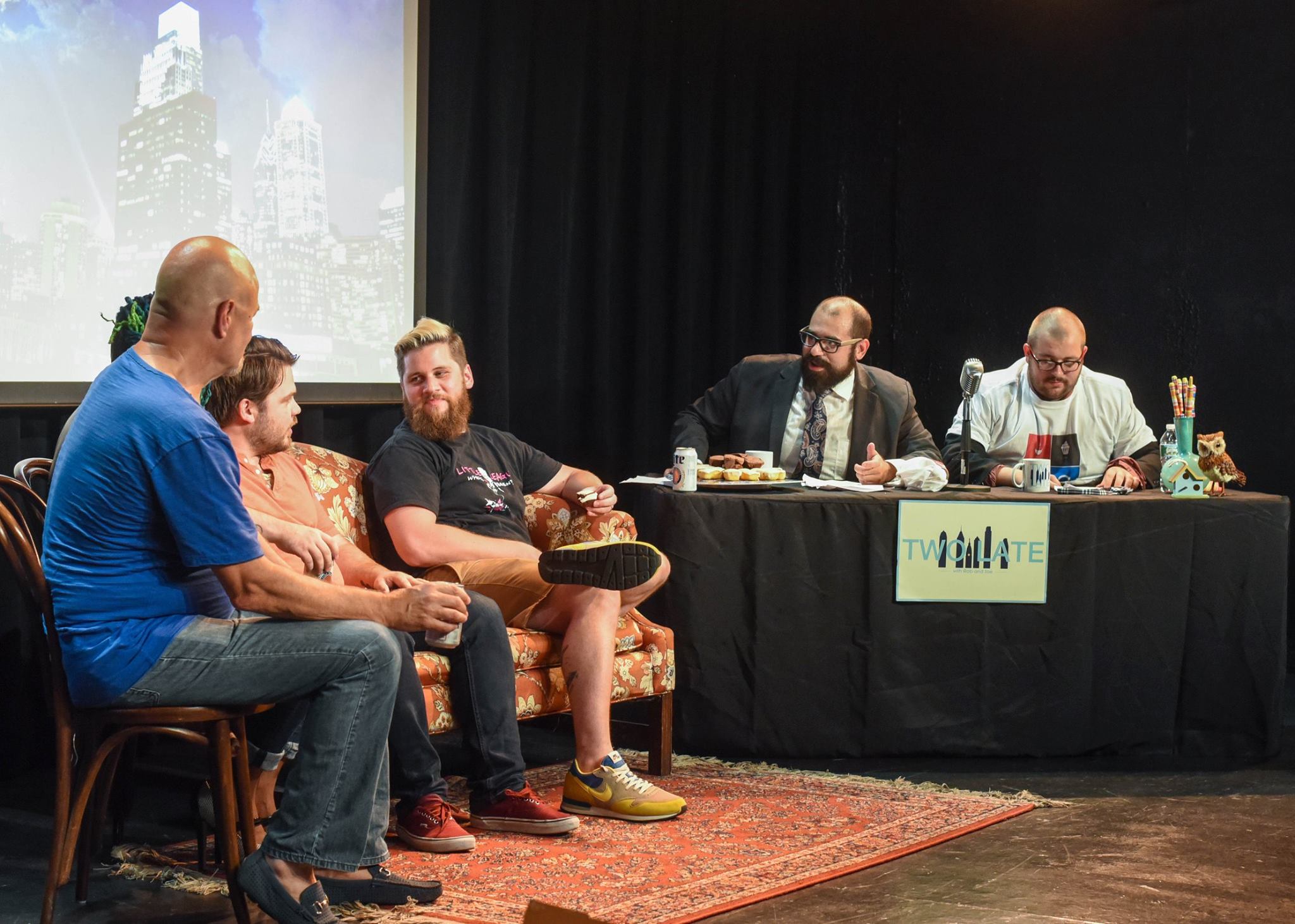 The late night comedy talk show Two Late With Rob and Joe presents their annual Halloween show on October 23rd at the Philly Improv Theater (PHIT). Co-hosts Rob Alesiani and Joe Tuzzi take the desk together, building on their experience as improv comedy duo Roomies. Each is part of a PHIT house improv team and numerous independent comedy groups around the area. The show, which observed its first anniversary this August, combines humorous scripted commentary on current events, live sketches, audience games, and interviews with local guests. This month’s show has multiple Halloween elements, like candy giveaways and the show’s kooky spin on a costume contest.

“Rob and Joe” are fiercely loyal to Philadelphia. The Alesiani family has been in the region for four generations. When asked about the show’s regional connections, Joe Tuzzi said he loves “that we focus on something local. We have had Dr. Timaree Schmit, Tom Henneman of Federal Donuts, and Pierre Robert. Our list of dream guests keeps growing.”

The show’s team has booked Philadelphia author Anna Goldfarb, Andrea Duffy of WBEB More FM Philly, and comedian Shannon DeVido for Friday’s show. “Two Late’s One Night Only House Band” Sarah Clemency provides musical accompaniment for the show. Anna Goldfarb is the publisher andeditor of the blog Shmitten Kitten. She’s also an advice columnist for The Frisky, and author of the book, Clearly, I Didn’t Think This Through (Berkley, Penguin). Radio personality Andrea Duffy hosts the mid-day show on WBEB “More FM,” an adult contemporary radio station broadcasting at 101.1 MHz. It remains the only stand-alone, major market FM radio station in the country. Duffy performs longform improv with No Ghosts?, an independent group. Shannon DeVido is a comedian, actress, and musician who performs improv, stand-up, and sketch comedy. She created the webseries “Stare at Shannon.” DeVido has appeared in Hulu’s “Difficult People” and has been a guest on The Nightly Show with Larry Wilmore. Sarah Clemency performs music and comedy locally, in addition to teaching private piano lessons.

The Two Late show is Friday, October 23 at 11:55pm. Tickets are $5, and can be purchased here.
company TicketLeap and also at the door. PHIT is located in the Adrienne Theatre at 2030 Sansom
Street.