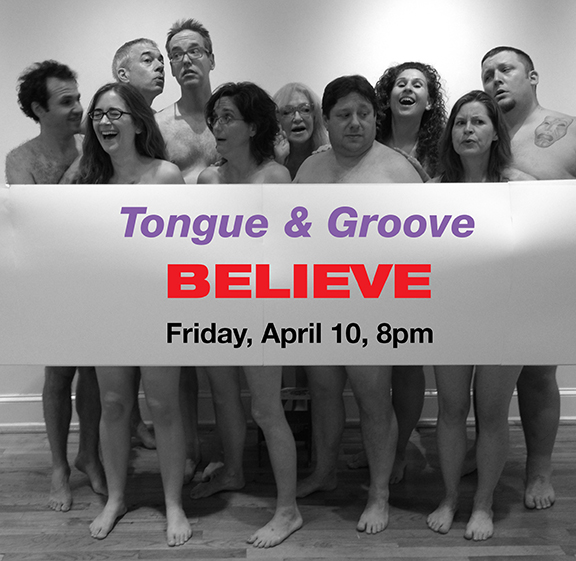 On Friday, April 10, Tongue & Groove Spontaneous Theater, known for cutting-edge unscripted shows that depict both comic and dramatic elements of real life, will debut a brand new show: BELIEVE. For BELIEVE, the audience is asked to honestly and thoughtfully fill in the phrase “I believe…” Their anonymous responses may be political, spiritual, ethical, moral, religious, dark or funny. The ensemble then instantly creates unscripted scenes, monologues and online debates inspired by the “I believe…” responses.

T&G’s mission is to create compelling unscripted stories of authentic relationships both hilarious and heartbreaking, inspired by personal information from their audiences, and enhanced by live improvised music.

This show is part of T&G’s monthly series on Second Fridays at The PlayGround at The Adrienne Theater, 2030 Sansom Street, at 8 pm. (Running time 75 mins.) Tickets are $15 at the door, $12 in advance online, $10 for groups of 5+, and $8 for students. Tix can be purchased via tongue-groove.com.

BELIEVE: Revealing answers to “I believe…” anonymously submitted by the audience, the ensemble instantly creates a montage of hilarious and touching scenes and monologues, exploring authentic relationships and accessible themes, accompanied by live improvised music. Audiences are engaged not only by the unscripted performance, but also by the fun of wondering who in the audience matches the belief described in the show!  Will you be uncovered? Believed? For this show, audiences are encouraged to share their idealism, suspicions, convictions, predictions and religious zeal, all in good fun… and the ensemble, trained in physically intimate unscripted theater, is up to the challenge!

MONTHLY SHOWS: For the past eight years T&G has performed runs of shows in the Spring and Fall. “We continue to build our audience by offering regularly scheduled performances” says Producing Artistic Director Bobbi Block, “We hope to share our work with more people by appearing consistently throughout the year.” The monthly residency will feature popular formats from the company’s repertoire, plus introduce new formats and possible collaborations. One collaborator will remain constant: the audience. T&G will always ask for anonymous personal information to inspire their instantly-generated unscripted work, making the artistic process a true partnership with the community. “We have been pleased with the response so far, our audience is expanding, and we will continue to build a relationship with a large, diverse community so that we may challenge and excite each other.”

For exceptional unscripted theater, join Tongue & Groove for their monthly shows, second Fridays, at The PlayGround at The Adrienne. And for a fun look into people’s personal theories and affirmations, join T&G on April 10 at 8pm for ‘BELIEVE.’

Information, video and tix at tongue-groove.com