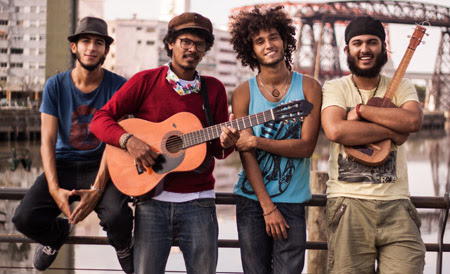 Philadelphia, PA 2015—The Penn Museum’s popular Summer Nights Concert Series brings a combination of eclectic live music and laid-back fun to University City. Now in its sixth year, the series runs Wednesdays from 5:00 to 8:00 pm June 17 through September 2, 2014. Concerts are held in the Museum’s outdoor Stoner Courtyard, offering an urban green space replete with gardens, a central marble fountain, a lawn, and a peace bench designed by the City of Philadelphia Mural Arts Program. General admission for guests ages 6 and up is just $10 (and includes Museum admission), and free for children under 6 and Museum members.

This year’s series features cultural rhythms from around the globe by a mix of local and international bands and indie musicians offering lively Calypso, vintage rock ‘n roll, Americana melodies, Afro-Brazilian pop, Jazz-Age syncopation and more. The Penn Museum’s international galleries remain open, with an optional, docent-led mini-tour in between music sets at 6:30 pm. The Museum Shop offers extended hours, allowing visitors to browse books, jewelry, toys, and more until 7:00 pm. Outside, guests of all ages can explore touchable (and even wearable) artifacts at a Cartifact station.

The Pepper Mill Café offers a garden bar, with cocktails, non-alcoholic beverages, and regionally themed light fare available for purchase. Guests can choose from three outdoor seating options for each performance: bistro-style tables, stage-front seating, or the lawn. Concerts move inside in the event of rain.

June 17
Harrisburg Mandolin Ensemble
This Pennsylvania-based group returns to kick off the summer series. Inspired by the early 20th-century tradition of the community mandolin concert, the group lays down original tunes and arrangements, as well as selections of jazz, swing, bluegrass, old-time, folk, and world music.

June 24
Xande Cruz
With a sound as rich and diverse as his native São Paulo, Xande Cruz adeptly blends urban and traditional, colors and sounds, together in a soulful way like none other. His music defies genres by combining Afro-Brazilian rhythms with samples, funk guitars, bass, drums, horns, and vocals.

July 1
Vulcans
Americana and folk artists Vulcans bring lush three-part harmonies, compelling instrumentation, and engaging arrangements to their songs. Winners of numerous awards, contests, and distinctions, Vulcans have earned acclaim from critics and audiences alike. The group crafts modern Americana tunes using harmony as an instrument in itself, creating winding and bending melodies that sway from major, to minor, and home again.

July 29
El Caribefunk
This band from Colombia joins the summer series with a powerful rhythm and energy all their own. Their fun, upbeat style brings together funk, salsa, and elements of Caribbean music, including calypso, zouk, and Haitian compas, and gets audiences on their feet and dancing from the first note.

August 12
Trinidelphia
Trinidelphia has been pleasing local audiences since 2005 with a perfect combination of American and Caribbean styles. Fusing Trinidadian Soca and Calypso with Latin jazz, reggae, salsa, and American top 40, they have developed a sound all their own. Their unique and rhythmic arrangements of jazz and popular songs cast the steelpan in fresh new light, pushing the stylistic and artistic boundaries of an often-typecast instrument.

August 19
Undercover
Get ready to start singing along as this group travels back in time with favorite classic rock hits, from bands like the Beatles, the Rolling Stones, the Eagles, the Band, and Elvis Presley.

August 26
Red Hot Ramblers
The Red Hot Ramblers are an authentic 1920s jazz ensemble in every way. They exemplify red-hot syncopation, stompin’ rhythms, and lyrical melodies associated with the Jazz Age. Their snappy on-stage appearance pays homage to the Roaring ’20s. From concert halls to dimly lit bars to swing dances to outdoor events and weddings, the group has been pleasing audiences since 2012.