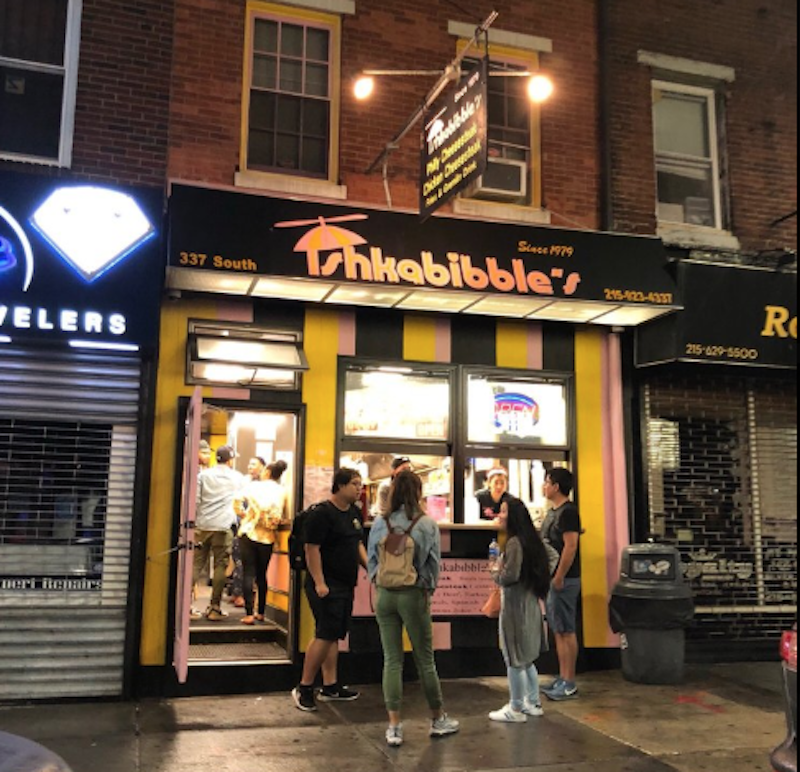 Arguably one of Philly’s best cheesesteaks and definitely one of the best chicken cheesesteaks in Philly, Ishkabibble’s (337 South St.) is a stone’s throw away from the tourist hot spot Jim’s Steaks. However, locals definitely give Ishkabibble’s more than enough love. Now it looks like their getting national love.  The Daily Meal Named Ishkabibble’s one of America’s best hole-in-the-wall restaurants.

Originally opened in 1979, Ishkabibble’s steaks are meaty and come on fresh baked rolls.  If you’re a regular of this spot then you know to also pair your steak with a Gremlin.  For those that don’t know the Gremlin is a hybrid of lemonade and grape drink and is the perfect compliment to their steaks.

Although Ishkabibble’s is being lauded for their spot off 3rd and South, they also have another location just up the street at (517 South St.), which isn’t so hole-in-the-wall’ish.

However, keeping with the tradition, ordering from the take-out window at the original shop is a great tradition for Ishkabibble’s fans and The Daily Meal agrees.  Their list is comprised of 75 hole-in-the-wall restaurants across the country.  So how did they judge?  According to the article:

“First of all, it needs to fit the most literal definition of the term — by being small. Second, it has to be fairly inconspicuous, not exactly looking like a legendary restaurant (until you account for the perpetual crowds, of course). And third, it has to have an air of authenticity, that feeling that this is the place and that there’s nowhere else quite like it. A lived-in feel also helps, but that doesn’t mean that it needs to be old. And in order to be called one of the best? Well, obviously, that’s the most important part: The food needs to be absolutely spectacular, because that’s the main reason why the crowds keep coming.”

Piazza’s Opening The New Pod Park Next With Over a Dozen Food Vendors and Roof Deck!
Joe’s Steaks is Serving Up Butterscotch Krimpet Milkshakes!