Piazza's Opening The New Pod Park Next With Over a Dozen Food Vendors and Roof Deck! - Wooder Ice 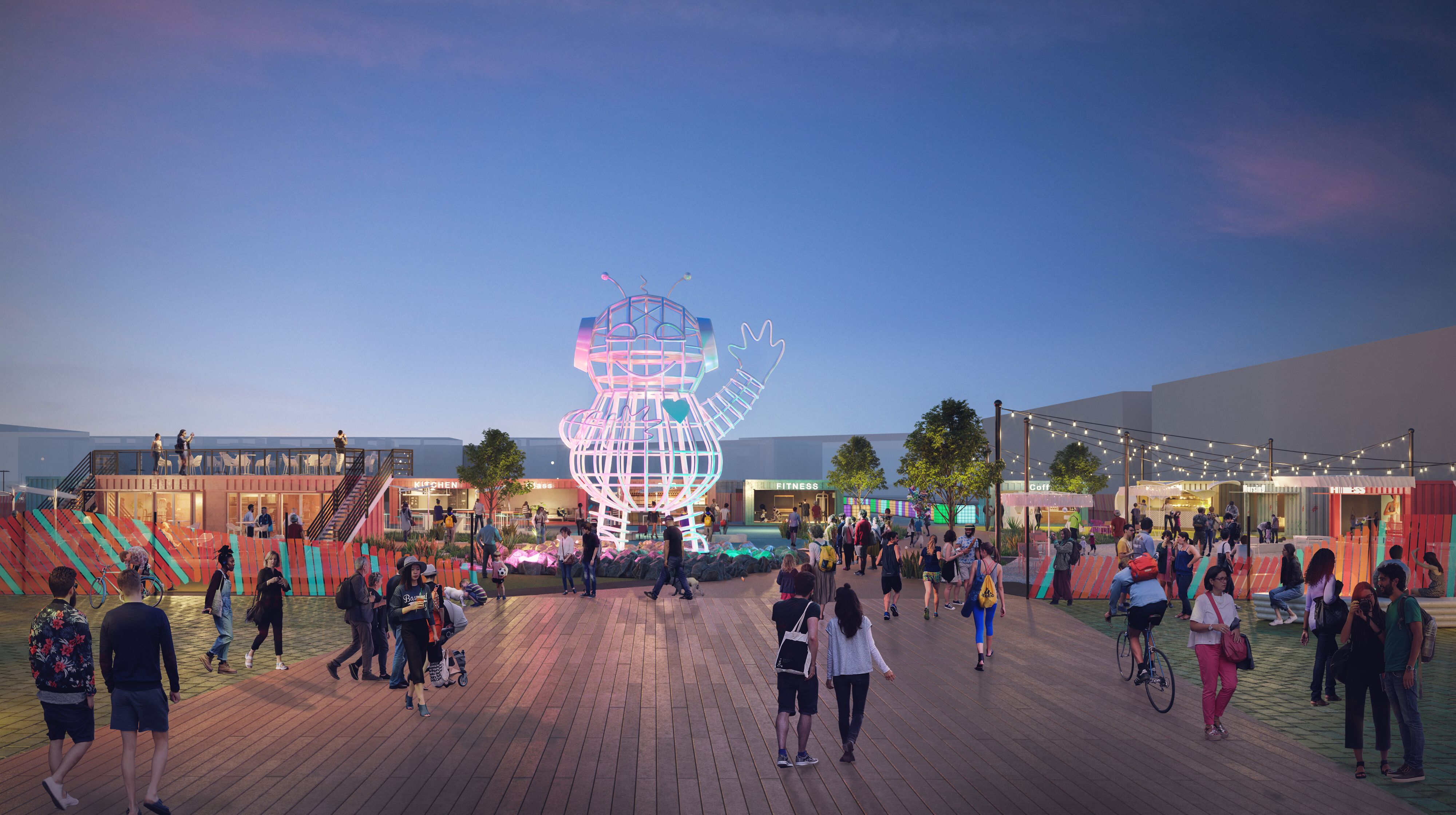 Piazza’s Opening The New Pod Park Next With Over a Dozen Food Vendors and Roof Deck!

Piazza’s Opening The New Pod Park Next With Over a Dozen Food Vendors and Roof Deck! 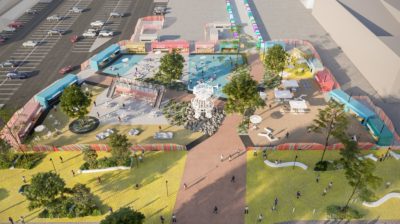 Waving from the Center of Piazza Pod Park will be BEBOT, a 33-foot tall, 13,000-pound robot statue from Burning Man. Look for seating in a two-level dining pod, inside several of the individual pods, and around the park for up to 300 people. Connecting The Piazza and Piazza Pod Park to the Market/Frankford Line of SEPTA will be an outdoor art installation created out of 185 pulsing and colorful ThinkCubes. Entertainment will include food festivals, themed happy hours, yappy hours, outdoor concerts, food and drink workshops, and other special events.

“To me and many others, Northern Liberties is the nicest neighborhood in the city,” said Post Brothers CEO Mike Pestronk. “Our intention is to create a hub that brings together our community, and that draws attention to the best of our neighborhood. We also want to celebrate the best of local food, coffee, beer and spirits by providing an out-of-the-box opportunity for them to expand, grow and reach new audiences.”

Philadelphia’s newest pop-up park is designed to be more than just a pop-up park, more than a dining destination and more than a great entertainment venue. Post Brothers wants Piazza Pod Park to be Philly’s next innovative movement in dining and recreation.

BEBOT was created by London-based artist Andrea Greenlees. The climbable wireframe sculpture is 33 feet tall and weighs 13,000 pounds. The artwork is literally the heart of the entire park, with a literal giant copper heart at its core.

Greenlees created the installation in 2018 for Burning Man in keeping with the year’s theme, “I, Robot,” where artists were asked to look at “how many forms of artificial intelligence that permeate our lives.” BEBOT was designed originally to be participatory art, where art enthusiasts could climb on, around and inside the frame.

BEBOT was named by Art World as one of the “biggest, weirdest and most radical art from Burning Man 2018.”

Next to BEBOT, at the center of the park, look for a two-level enclosed and climate controlled dining pod with a roof deck with unparalleled views of the park, the night’s entertainment, and of course, the BEBOT himself. Surrounding BEBOT and the dining pod, are 14 colorful repurposed shipping containers, spread out in the four zones in one oversize semi-circle. 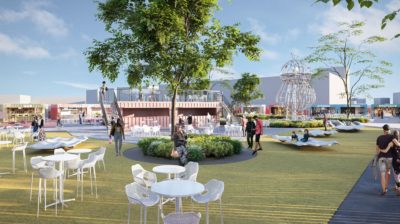 s, distillers, brewers, bar owners and coffee roasters that would bring something new and exciting to the pop-up park.

“Surrounding areas like Fishtown and Kensington, are flush with great dining options, but there’s also so many types of cuisine we don’t have,” said Pestronk. “We saw an opportunity to diversify the food scene. We wanted to find cool and innovative dining partners that would bring something new to the table. While we wanted quick service, fast casual and street food, we also wanted top quality and a great cultivated mix that worked well together but didn’t compete with close-by established spots. It was also important that we sourced locally and showcased the best in class from around the city. We are proud that when Dim Sum House from University City wanted to expand and move into Northern Liberties, they picked Piazza Pod Park. We also have one to watch, with Lokal Artisan Foods heading for a major expansion this year – and we are proud to have her call Piazza Pod Park her first long-term brick-and-mortar. Come hungry, Philly. Together, we’re not only firing up a great menu of options, but we’re investing in these great culinary talents.”

Restaurant pods vary in side and range from 10 feet long to 40 feet long. Some have windows like a food truck that open to the outside. Others have a window, plus a mini-dining room for enjoyment in the winter months. All are equipped with heating, air conditioning and speaker systems for maximum comfort and enjoyment.

The first wave of announced tenants for the pods include:

* Spread Bagelry – Hot on the heels of announcing two new locations on the Main Line and on Walnut Street, Spread surprises with news of joining Piazza Pod Park; the park location in fact will open before the other two new locations and bring Founder Larry Rosenblum’s signature Montreal style bagels and coffee to Northern Liberties. Spread will be making their classic bagel sandwiches and specialty items, made with the same quality ingredients their customers expect and love from them. Spread will also be doing an expanded coffee selection in collaboration with a Philadelphia favorite, Saxbys. In addition, they will feature some special novelty items which are surprises, so stay tuned.

* French Toast Bites by Lokal Artisan Foods – Charisse McGill was fresh off of her first season at Made in Philadelphia Holiday Market when she was heading to a brick-and-mortar in the Philadelphia suburbs; this expert in open-air economics and organizer of Lansdale Farmers’ Market reversed course to be part of Piazza Pod Park; she will bring her famous French Toast Bites, sides of bacon and French Toast Spice to Northern Liberties with all-day hours including early morning. Watch for her spice to debut in grocery stores this spring, and for her bites to hit the festival circuit this spring and summer. Lokal plans to offer delivery in Northern Liberties. French toast at your door? Yes, please.

* New Liberty Distilling – New Liberty Distillery is branching out of their vibrant North Philadelphia headquarters and joining the trendy Piazza Pod Park. Their custom blended whiskey draws on local ingredients and displays the skills of their master distiller and owner, Robert Cassell. While New Liberty distills numerous great craft whiskeys, such as malt and bourbon, their passion will always be making Pennsylvania rye whiskey world-famous once again!

* Urban Village – No stranger to the Piazza, this Northern Liberties favorite will be making an appearance at the Piazza Pod Park this summer. Dave Goldman and Tom Revelli’s Urban Village Brewing Company will present six craft beer selections, which will rotate throughout the season. Dave Goldman, co-owner of Urban Village, has perfected the art of brewing. With a background and certification in home-brewing, Goldman is proud to offer local craft beers at both the Pod Park location this summer and brick-and-mortar Urban Village all year long.

* Tiki Takos – El Camino Real owner Owen Kamihira will bring a brand new foodie feature to the Pod Park – the launch of Tiki Tako. Look for Pacific rim tacos and Mexican style street food. Visitors can also sip on a selection of Mexican-inspired tiki cocktails, all made with New Liberty Distillery spirits. Indulge in a Machete Mai Thai, El Zombie, Bahama Mamacita, or their signature cocktail, the Piña-rita, a frozen pineapple margarita served in a pineapple.

* Mama Maria’s Italian Ice – Nico, Maria and Peter Papanikolaou expand with their first location outside of Port Richmond. The city’s newest locally made water ice hot spot will scoop up premium and standard flavored water ices made in-house and using fresh seasonal ingredients. While they will have Philly favorite flavors, like lemon, cherry, mango, green apple, cotton candy and orange cream, also look for inventive flavors that pay homage to life in Philadelphia and at the shore – including their “(Trust) The Process” and a new flavor to welcome Bryce Harper to the Phillies. Look for an exclusive flavor available only at the Pod Park.

* Empanada Box – Get your fill of empanadas at Empanada Box, which will feature the savory pastries influenced by different cultures. Enjoy special selections that inspired by the City of Brotherly Love. A variety of 6-10 empanadas will be available, and don’t forget to get an elote, Mexican street corn, with brushed mayo, cheese and spices. Bottled beverages will also be available, supplied by local vendors.

Watch for Post Brothers to announce a second round of additions to the park, including well-known and award-winning names from other top foodie neighborhoods like East Passyunk and Midtown Village.

MAY OPENING AND EVENTS PROGRAMMING

Piazza Pod Park is slated for an early May opening. The project has been months in the making – and was an idea that originated back to the early days when Post Brothers purchased The Piazza and Liberties Walk back in 2017.

“When we purchased The Piazza we realized we had this tremendous opportunity to not just revitalize this amazing complex, but to contribute on a larger level to the success of Northern Liberties,” said Pestronk. “The Piazza is the very heart and soul of this ever-evolving neighborhood that continues to grow and expand at record pace. We are proud to present Northern Liberties with an exciting new community space. Post Brothers is thrilled to bring a renewed energy back to the area – and together light the spark for great things to come.”

“Our goal is to create the thriving community hub that the Piazza courtyard has always tried to be,” said Post Brothers CEO Mike Pestronk. “The Piazza struggled over the last several years while the rest of Northern Liberties flourished. Many of the retailers there have not been successful because the programming has not been relevant to the rest of the neighborhood. By physically moving the community hub across the street, and shifting the attractions so they speak to the neighborhood, we want to make The Piazza reach its potential and offer the Northern Liberties neighborhood an unparalleled amenity.”

Post Brothers has a proven track record of revitalizing buildings they take over by adding inventive and luxe amenities. In the case of The Piazza, Post Brothers already has begun plans to renovate eight buildings surrounding the 80,000 square foot central plaza. As part of their plans, Post Brothers will shift the Piazza’s focus from the interior European-style courtyard to facing the streets – including Germantown Avenue, between 2nd and Hancock. This means turning the many restaurants and retail shops in The Piazza towards what will become the newly hardscaped pedestrian-friendly street.  Across the street, while Piazza Terminal waits to kick-off construction, Piazza Pod Park will open and aid in creating this vibrant corridor that will ultimately connect The Piazza and Piazza Terminal.

As part of this objective, events that were traditionally held in The Piazza Courtyard will move to the street on Germantown Avenue and into Piazza Pod Park.

Year-round programming at Piazza Pod Park will offer something for everyone – with a special focus first on providing events that will energize and appeal to the neighborhood. Regular staples like outdoor movie screenings, outdoor concerts, dance lessons and makers’ workshops will return but with new twists, more frequency and added features. New events being discussed include cocktail workshops, events for Philly Beer Week, Philadelphia Zoo on Wheels events, reading nights, art events, happy hours, trivia nights, kids’ workshops, Mom and Me activities, food festivals, and much more. For four-legged friends, look for potential yappy hour nights, especially with the newly renovated dog park across the street. Also, look for events to activate the space year-round with new and additional programming between Thanksgiving and Christmas, as well as outdoor events in the winter months.

Piazza Pod Park will be open seven days a week, from 7:00am to 10:00pm, and until Midnight on Fridays and Saturdays. Please check with individual pod tenants for their times and days of operation.

Piazza Pod Park is accessible by public transportation – including bus and train. The Market-Frankford subway is located just blocks away. The Piazza and Piazza Pod Park are a short ten to fifteen minute Uber or Lyft ride from Old City and Center City, Philadelphia. For those driving, look for the opening of an adjacent parking lot directly next to Piazza Pod Park with at least 150 spots anticipated being available.