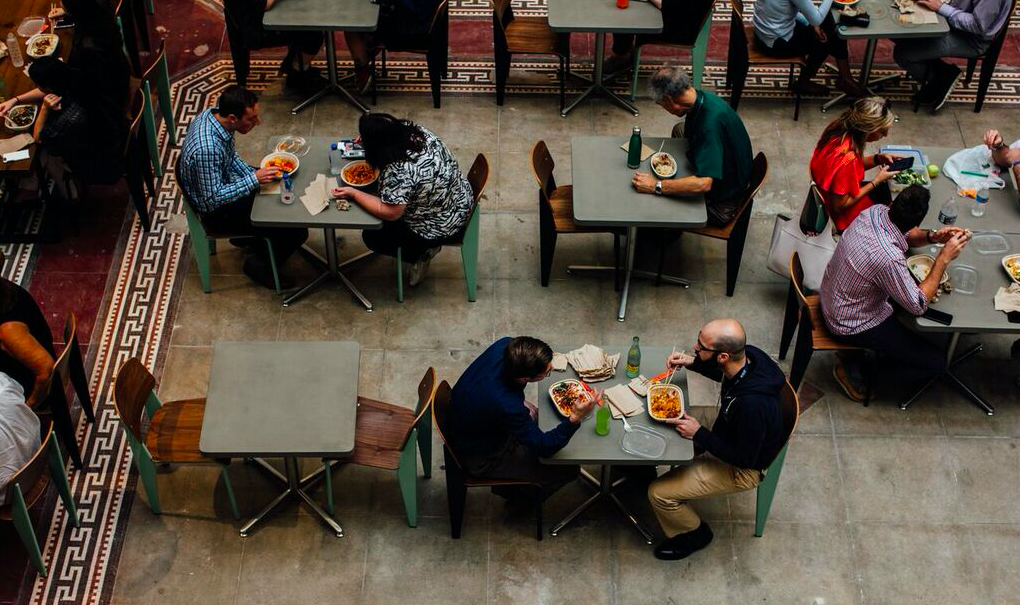 MRP Realty in partnership with CANADev, is thrilled to announce he grand opening celebration for The Bourse Food Hall, Thursday, November 15th and Friday, November 16th . Originally constructed in 1895, this historic gem has been transformed from the original commodities exchange center to an artisanal food hall.

The grand opening celebrations will continue on Friday, November 16th  with The Bourse Bonanza, featuring daylong entertainment and hourly pop-up performances with guest appearances from Swoop and Philadelphia Eagles cheerleaders, a mini Mummers parade with the Quaker City String Band, acrobats and stilt walkers, and Philly’s beloved historical re-enactors such as Ben Franklin. Friday will feature yet another day of giveaways, including the chance to win a pair of Philadelphia 76ers and the Philadelphia Flyers tickets (drawings at 1
p.m. and 6 p.m.)

Thursday’s celebrations will cap off with an Old City Happy Hour from 5-7 p.m. for Old City residents, business-owners and employees. The grand opening celebrations will continue on Friday, November 16th with The Bourse Bonanza, featuring daylong entertainment and hourly pop-up performances with guest appearances from Swoop and Philadelphia Eagles cheerleaders, a mini Mummers parade with the
Quaker City String Band, acrobats and stilt walkers, and Philly’s beloved historical re-enactors such as Ben Franklin. Friday will feature yet another day of giveaways, including the chance to win a pair of Philadelphia 76ers and the Philadelphia Flyers tickets (drawing at 1 p.m. and 6 p.m.)

The Bourse Food Hall vendors include:

Bronze Table by Vera Pasta:   This fast-casual concept from the team behind Vera Pasta serves made-to-order pasta meals alongside Italian wines and freshly packaged artisanal pasta to go. Customized pasta choices include a selection of signature dishes such as Nona’s Ricotta Gnocchi, Wild Mushroom &amp; Sage Ravioli, Mac N’ Cheese, and more. The experience is completed with choices ranging from Insalatas to Spuntinis including crowd favorites like Cheesy Garlic Bread and a Bowl of Meatballs. Bronze Table’s traditional and innovative approach to pasta-making creates a truly unparalleled experience.

Lalo: Neal Santos, Jillian Encarnacion and Resa Mueller, the industry veterans behind Pelago, a hospitality group specializing in Filipino-inspired restaurant pop-up events, bring the Philippines to The Bourse with Lalo, a fast-casual concept with a focus on Filipino comfort food. Named after the Tagalog words for grandmother and grandfather, Lalo is inspired by the approachable and friendly spirit of Filipino lutong bahay (Filipino home cooking). The menu will rotate seasonally, but highlights will include Inihaw and the Kamatis Salad. Lalo will also serve San Miguel beer and a selection of craft cocktails. All of the Filipino recipes are sourced from Jillian’s grandfather who
sold Filipino-style BBQ sandwiches and skewers from a small cart parked right across Independence Mall for three decades.

Menagerie Coffee: An Old City staple for the last five years, this locally-owned and operated specialty coffee shop opens up its second outpost at The Bourse and will keep patrons caffeinated with Dogwood Coffee and Elixr Coffee. The menu will include a variety of breakfast
bites served seven days a week alongside fresh Machine Shop pastries delivered daily and made-to-order breakfast sandwiches. A winner of Philadelphia Magazine’s Best of Philly™, Menagerie Coffee has also been featured in Bon Appetit Magazine.

Penzeys Spices: Penzeys Spices boasts a vast selection of well-curated, fresh, high-quality spices from around the world, including cinnamon, garlic, dill, and many more. One of a kind spice combinations created by Penzeys are also available such as Mural of Flavor and Sunny Paris Seasoning. Recipes using these unique spices are available so chefs of all levels can explore the world of at-home cooking at The Bourse.

Takorean: With four locations in the DC area, Takorean will bring a delicious combination of Korean-inspired flavors with a Latin-American twist.  In addition to their signature Korean tacos, the menu will include Korean rice and salad bowls, all made from scratch with the freshest
ingredients. Also offered is a fully customizable menu comprising of five primary proteins, a seasonal vegetable, an array of slaws, handcrafted sauces, toppings and garnishes.

Abunai Poke: Abunai Poke is bringing the taste of Hawaii to Philadelphia with a selection of modern Hawaiian dishes and poke, including spicy salmon, tofu, and garlic ahi tuna options. Patrons can choose from a variety of signature bowls and will also have the option to create
custom variations. Each meal is made-to-order with the freshest ingredients. Aloha!

Bluebird Distilling: The Bar by Bluebird Distilling, headed up by Founder and Master Distiller, Jared Adkins, brings his extensive selection of grain-to-glass award-winning spirits, including Four Grain Bourbon, Straight Rye Whiskey, and Juniperus Gin to Old City with a craft cocktail bar featuring unique takes on the classics in addition to a rotating selection of one-of-a-kind creative concoctions.

Bonatsos at The Bourse: is a third generation family-owned and operated flower shop serving the Greater Philadelphia region for over 75 years. Visitors to Bonatsos at The Bourse will be delighted by floating terrariums and succulents, seasonal potted and hanging plants, mason jars filled with farm fresh locally-sourced wild flowers, and trendy bouquets with punches of color in addition.

Break Juicery: Break Juicery is bringing its delicious, innovative approach to The Bourse Marketplace with its extensive variety of juices and smoothies as well as açaí bowls and wheatgrass shots. Boasting locally sourced and organic fruits and vegetables, their goal is to
provide customers a better, healthier daily diet plan that cuts through the hype of celebrity “detoxes” and “cleanses” to restore the science of health.

Bricco Pizza: A second location for Westmont, New Jersey’s acclaimed traditional roman style pizzeria, pizza expert, Vincenzo Barone will craft traditional Roman-style “pizza a taglio” made with homemade 72-hour dough and the freshest ingredients available. With imported Italian ingredients, and a light and airy crust, this pizza transports you to the streets of Rome. Choose from a variety of authentic Roman style pizzas as well as suppli, a classic street food similar to fried risotto.

Chocodiem: Named one of the 10 best chocolatiers in North America by the Institute of Culinary Education, Chocodiem offers hand-crafted, artisanal Belgian chocolate confections along with a range of French macaroons, truffles, chocolate gelato, frozen hot chocolate varieties and more. In addition to their award-wining grab-n-go sweet treats, Chocodiem will boast a bar menu featuring Belgian chocolate and wine pairings as well as a cocktail menu with chocolate themed concoctions.

FreeByrd Chicken: This fried chicken hub will offer an extensive selection of sandwiches, bowls, and curly fries, in addition to fresh brewed sweet tea, local craft beer, and more. Sandwiches will be built with natural and local chicken breast meat, topped with house-made pickles, smothered with signature sauces, and sandwiched between two buns.

Marino Brothers Cheesesteaks: Serving rib-eye cheesesteaks with choice of American, whiz or provolone cheeses wit’ or wit’out. Menu offerings range from a classic cheesesteak to a creative interpretation of a pizza steak. Chicken cheesesteaks are also available along with additional toppings and sides such as mozzarella wedges or fries. Patrons will be able to pair a local brew to accompany this Philadelphia staple.

Olive With A Twist: A gourmet pantry offering a carefully curated selection of the finest cheeses, pâtés, charcuterie, olive oils, balsamic vinegars, sauces and more. The team behind Olive with a Twist prides themselves in stocking all-natural balsamic vinegar and top-quality olive oils. A selection of ready-to-eat sandwiches will be freshly prepared featuring imported cheeses along
with award-winning meats from Schaller & Weber.

Prescription Chicken: The first Philadelphia brick and mortar location for this acclaimed soup purveyor will offer a signature spin on chicken soup. Valerie Zweig and Taryn Pellicone started delivering soup to hungry bellies throughout the Washington, DC area in September of 2016. They’ve channeled their love of all things soup to create a business dedicated solely to churning out their signature chicken-based soups, dubbed bowls of liquid gold. Prescription Chicken will cure whatever ails you, with everything from Matzah Ball Soup to Faux Pho, to a specialty soup dubbed The Hangover – a proven remedy for almost all of last night’s bad decisions.

Rustica Rosticceria: an authentic sandwich shop where Italy and Philadelphia meet. Owners and longtime Philadelphia residents, the Marino brothers, will be serving up delicious deli classics like House Roasted Pork, Sweet Italian Sausage, and Homemade Italian Meatballs. In addition to their signature sandwiches, Rustica will offer Rotisserie chicken and a variety of side dishes.

Rebel Taco: A new authentic Mexican taco purveyor from DC-based Social Restaurant Group. Rebel Taco steps outside the boundaries with bold, vibrant “not yo mama’s” taco flavors that will redefine the street taco. Everything is made from scratch daily using only the freshest ingredients, from the handmade tortillas to the sauces and salsa. In addition to tacos, the Mexican eatery will also serve margaritas.

TAPS Fill Station: The second outpost from the Baltimore-based TAPS Fill Station concept specializes in all things on tap with a solid focus on locally sourced, eco-friendly and sustainable practices. The 36-line draft system will pull everything from beer (21 taps) to cider (5), kegged
cocktails (2), red and white wines (6), and mead (2). Patrons can post-up at the bar and enjoy a beverage at their wraparound bar or take a growler to go.