It is pretty much safe to say that just about everyone has had the romantic notion of packing a bag and traveling the world.  Either backpacking through Europe, African Safaris, or mimicking Che Guevara’s motorcycle adventure through Latin America.

However, the reality is most do not have the time or means to jet set.  No worries my fellow Philadelphians, all you need is an imagination, a full tank of gas and you are able to have a slice of just about every continent in the world!  Wooder Ice has done the legwork and compiled a list of food trucks that provide a taste (literally) of foreign culture without leaving the city.  No passport? No problem.  Without further adieu Wooder Ice presents The Best International Food Trucks In Philly! 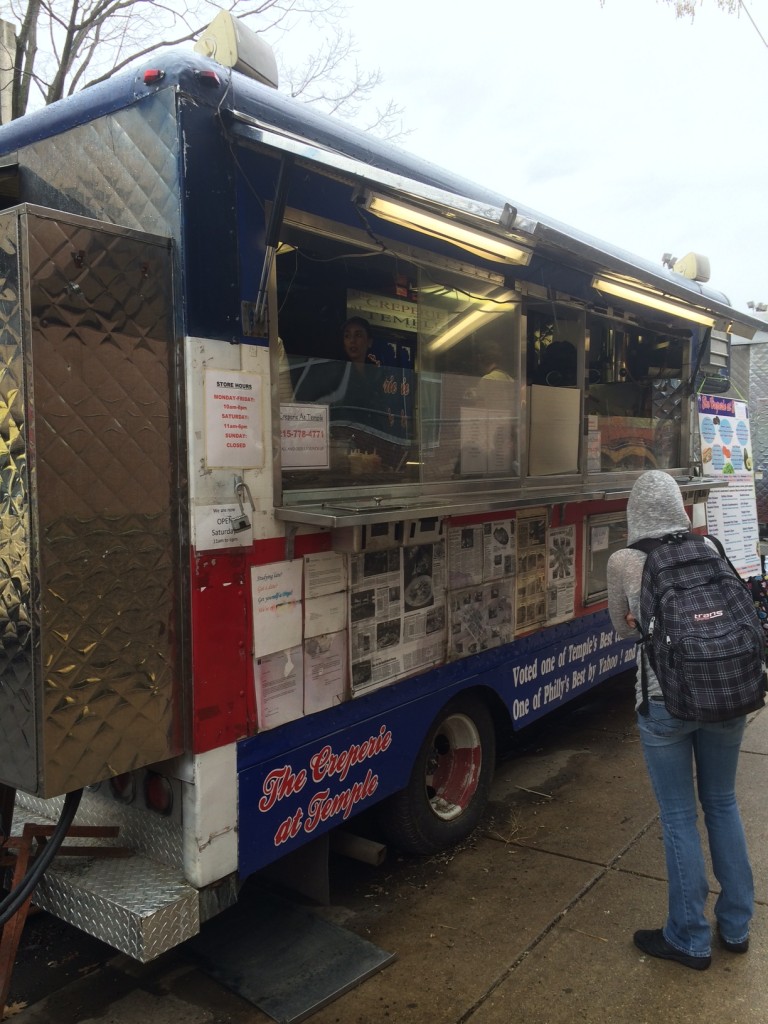 The Creperie At Temple University (13th & Norris Temple University)-This truck is stuff of legends.  Commanding a near perfect score on Yelp this truck is worth the hype.  Churning out an impressive menu of Crepes from meaty, vegetarian, to desert crepes you will be hard pressed not to find a crepe that will satisfy your hunger.  This spot is so good it has alumni coming back to campus time after time.  This truck also makes it easier to order with their “text to order service,” so if you are in the mood for a European this should probably be your first stop! 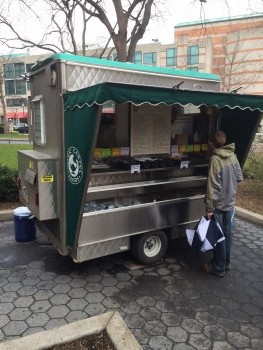 Magic Carpet Foods (34th and Walnut & on Spruce between 35th and 36th St. University City) – Although these tiny carts do serve up world-wide cuisine they excel in the

Greek and Mediterranean and Indian Cuisine.  So yes this spot is double dipping on continents.  The diversity of the cuisine isn’t the only reason why we chose this spot, it’s because it serves up vegetarian cuisine.  We understand not everyone is carnivorous, but even meat lovers would enjoy Magic Carpet.  As the list suggest University City dominates the food truck scene and this tiny cart ranks up there with the best of them.  Whether you are a hard core vegetarian or looking for alternative food options we highly recommend this spot. 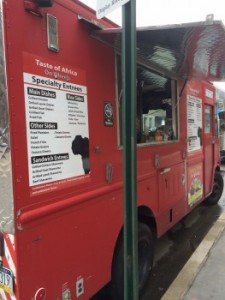 Taste of Africa (Market St. between 35th & 36th St.)– It was kind of tough finding a food truck that truly embodies African cuisine.  Most places are brick and mortar and not as prominent as as say your Italian or Mexican eateries.   So we were pretty stoked to find Taste of Africa.  Offering traditional cuisine such as shawarma as well as lamb and goat dishes, this is the perfect spot to indulge your senses into something new.  Face it, a trip to the motherland can be ridiculously expensive.  So while you are trying to save up to get your Jack Hanna on at your dream safari, visit Taste of Africa in the meantime. 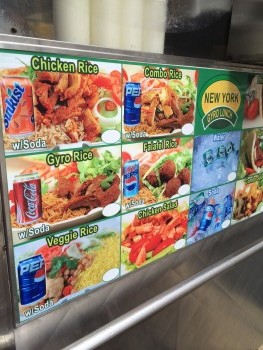 Halal Food Cart (20th & Market) –  Yes, yes we know the halal food trucks are sprinkled throughout center city, but we are showing love to this spot in particular.  When halal trucks are first mentioned most foodies immediately think of the famous halal guys in NYC.  Their claim to fame is being accessed at 4 am when drunk patrons are standing in line 40 deep to get a plate.  To be honest they are great but anything taste great drunk and 4 am.  The guys on 20th and Market stacks up with the best of them.  Since most carts in center city pack up after rush hour, the allure of a  devouring a halal plate drunk  at 4 am is just not feasible.  But a sober person at noon on a Monday will be just as satisfied.

Koja (38th & Sansom University City)-Fusing Japanese with Korean this spot is the anti typical corner store Asian cuisine.  With options to create your own dishes and a variety of choices to choose from this trucks packs a punch.  If we had a suggestion it would have to be the Bulgogi Steak Sandwich which has been ranked by many critics as one of the best sandwiches in the nation believe it or not.  So if you are looking for an Asian gem in Philly look no further than Koja. 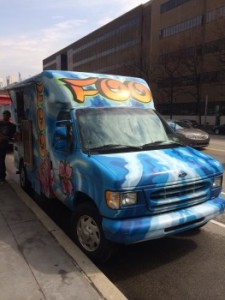 The Foo Truck (Mon., Wed. Thurs., Friday 35th & Market; Tues. Love Park; Fri. & Sat. nights Front and Master (El Bar)– You know the quintessential cool and tech savvy California food trucks that started the whole hip Food Truck phase?  Well this is it.  Social media heavy with routinely updated tweets and roaming locations.  But this truck is not in the business to just look cool, they serve up some of the most creative and refreshing dishes and deserts.  In short The Foo Truck is a foodies food truck (say that three times fast).  Since they do change location they have become well known among students and locals alike.  So if you haven’t gotten a chance to get familiar with The Foo Truck now’s your chance.

Cucina Zapata (31st & Ludlow Drexel University)– Imagine fusing Asian with Mexican.  Well you no longer have to imagine.  Cucina Zapata which dubs itself a Thai Asian Fusion truck is slinging enough tacos and burritos to be recognized as honorary Mexican.  With Thai chili and satay heavy options there will be no mistaking the Asian flare of each dish.  Although this spot is tucked away in a back street it is  is always teeming with patrons so plan accordingly.  The good thing though is that there are no hit or misses with Cucina Zapata it’s one of those “you can’t go wrong” places. 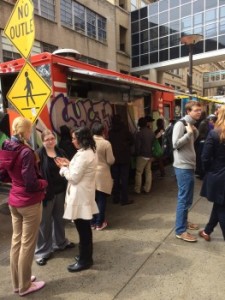 Cucina Zapata at Drexel is Never Short on Patrons 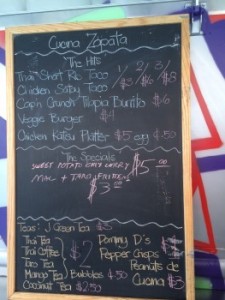 Delicias (Tue., Wed. Fri. 35th & Market, Tue., Wed., Thur. Fri. 40th & Locust., Thur. Love Park)– This is the crem de la crem of Latin street food.  This place boasts of health, cleanliness, and most importantly taste.  The arepas are home-made corn patties that are naturally wheat and gluten free.  This place just screams freshness.  Nothing comes off as processed and the choices are classic Latin American.  This Venezuelan inspired truck has a menu of traditional street car feel with restaurant quality ingredients. 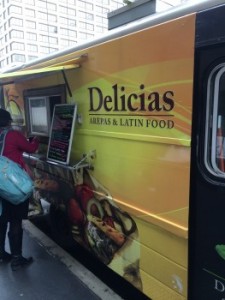 Delicias Arepa Menu Will Have You Coming Back for Seconds

Braz BQ  (Various Locations)– The good news is that this truck serves up some of the best steak sandwiches and wraps.  The bad news is you gotta be at the right place at the right time.  This free roaming Brazilian steakhouse on wheels serves up succulent carved steak that every meat lover dream about.  Relying heavy on social media, Facebook & Twitter to be exact, fans of this truck will have to follow to stay up to date.  Locations vary from Temple to University City, to the Naval Yard and everywhere in between.  Braz BQ is equipped with a custom made rotisserie oven the owner handcrafted himself to deliver the perfect steak every time.

The Braz BQ Making an Appearance at Temple University 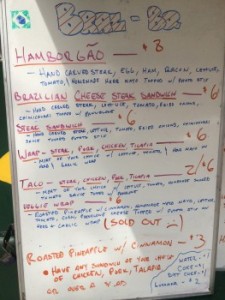 Taco Loco (3rd & Washington Pennsport)– Nothing says street food as the iconic taco truck.  Philly is spoiled with food trucks and although there are some great taco trucks out there we wanted to step outside the college scene and show love to a relative sleepy part of town.  Although Taco Loco is tucked away in front of Jefferson Park where trucks are few and far between, this place has managed to garner a lot of attention and earned a very respectable 4 out of 5 stars on yelp with 50 reviews.  This place is genuine so you’re not going to find a 30 something hipster at the helm but rather native speaking owners that serve up family owned sauces and spices.  Accommodating post rush hour eaters this spot stays conveniently open until 9 pm everyday. 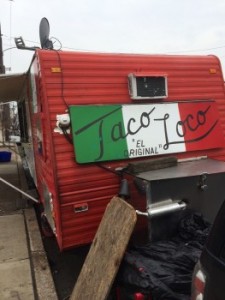 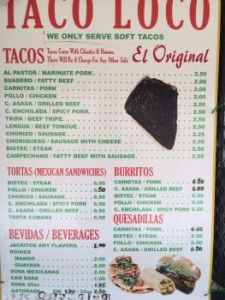 Jamaican D’s (17th & Spring Garden C.C.P, 3rd & Spring Garden, 12th & Norris Temple University)– No other dishes dominate the Caribbean food scene like Jamaican food.  Philadelphia has had it’s fair share of great Jamaican spots but it’s rare to find a food truck that packs both flavor and large portions.  Jamaican D’s has been expanding it’s reach over the years and the people have spoken.  The best Jamaican food on wheels serving up healthy portions at convenient locations and business hours.  Closing at 10 pm weekdays and 11pm Fridays & Saturdays Jamaican D’s is not just a lunch option but a viable dinner options with plates that can serve two.  Get two plates and you can literally feed a small family.  So if your waiting for the right Groupon vacation package to Jamaica to come along, you can always stop by Jamaican D’s in the meantime. 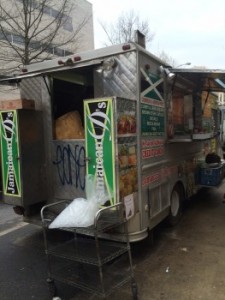 Jamican D’s at their CCP location 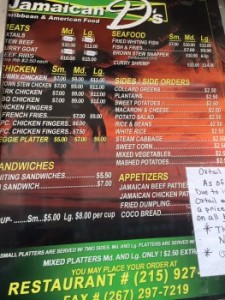 Sad News: Philly Named Among the Unhappiest Cities in the US According to a New Study
The Largest Target on the East Coast is Coming to KOP