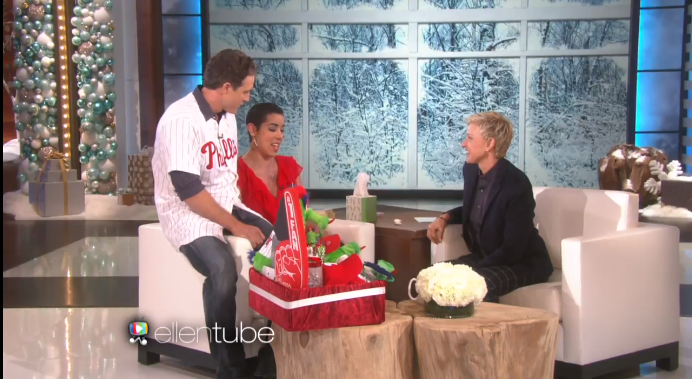 23 year-old Julie Kramer is battling synovial sarcoma.  For the vast majority of us that are unfamiliar with the medical term, it is a very rare form of skin cancer.  In fact less than 4% of the world’s population have been diagnosed with it.  While Julie may have every excuse to be down about her situation she was invited on the Ellen Show after a video of her dancing in the hospital went viral.

In relatively good spirits, Julie detailed her plight with the disease and updated everyone on her progress and positive attitude in regards to her fight.  As always, Ellen had a few surprises for Julie as she is known to give gifts.  The first surprise Julie received was a check for $10,000 from Target to help with her expenses.  The check alone was enough to bring Julie to tears.

However, Ellen brings up Julie’s love for the Phighting Phills, and asks who Julie’s favorite player is.  Without hesitation, she responds with Chase Utley.  Before you know it the all-star second baseman appears with gifts galore from the Phillies organization. In addition Chase gives Julie an offer she can’t refuse  The entire clip is a must watch. Check it out!