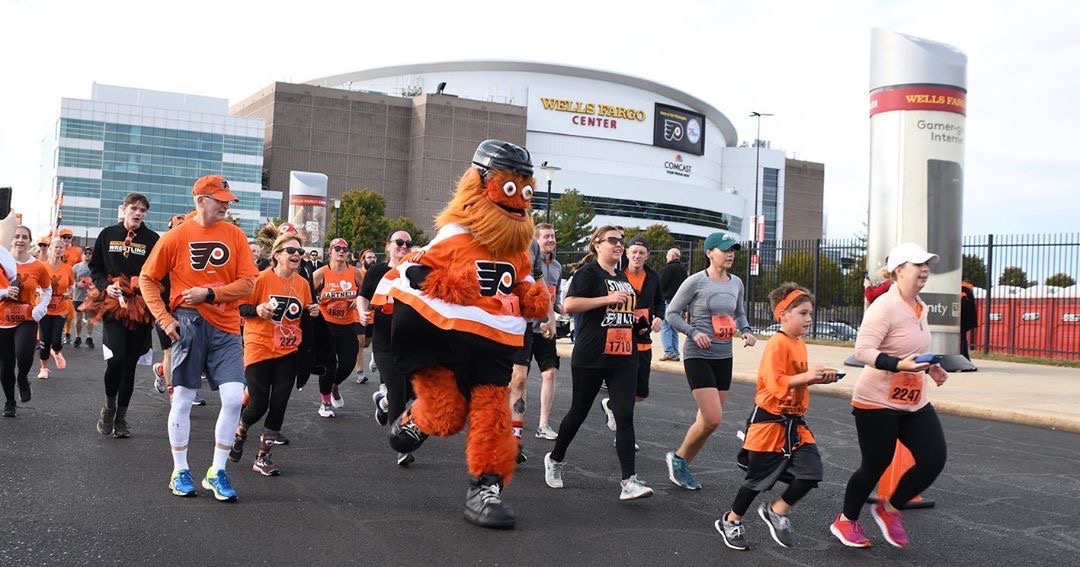 A Flyers fan favorite, the Gritty 5K presented by Penn Medicine, is returning for its second installment this September – with a virtual twist. While throngs of orange-clad fitness enthusiasts will not be gathering in and around the Wells Fargo Center in light of the coronavirus pandemic, the Philadelphia Flyers and Flyers Charities are set to host a weekend-long virtual run with the same Gritty style.

Race participants will have the option to run five kilometers in their own hometowns at any time between September 17 and 20 while donning their best Gritty costumes. Through an online race platform, runners will submit their time and photos to be eligible for specialty prizes such as “best in fur,” “most exotic route,” and other surprise awards selected by Gritty himself.

While last year’s course received a complete mascot makeover, this year’s race will encourage participants to create their own route. By running in a costumed group or pre-setting a cake smash station, the opportunities for Gritty-isms are in the hands of the fans themselves.

Despite his understandable disappointment, Gritty is prepared to take his namesake event into the virtual era. When asked about his participation, the mascot noted, “I heard virtual run and immediately thought this was a Wii Olympics competition, but now I get it. My training regimen is going to increase significantly. Being the defending champion is both a blessing and a curse. I will not go down without a virtual fight.”

All participants will have the option to add a race t-shirt, cooling runner’s wrap, or a future Flyers game ticket to their registration package. The option to include all three add-ons will be available.

Registration is now open at PhiladelphiaFlyers.com/Gritty5K. Funds raised from the Gritty 5K presented by Penn Medicine benefit Flyers Charities to help support a multitude of worthy non-profits across the Greater Philadelphia Region.

Since its inception, Flyers Charities has contributed over $30M to non-profits throughout the Greater Philadelphia Region that provide educational and recreational resources to underserved youth, engage in important medical and healthcare research, and countless community development initiatives.

Penn Medicine is the Official Health System of the Philadelphia Flyers and Wells Fargo Center.

Howie Long Said That Veterans Stadium Was the Worst Field He Ever Played On!
The Philadelphia Union Will Host a Fundraiser Featuring Part Owner Kevin Durant!