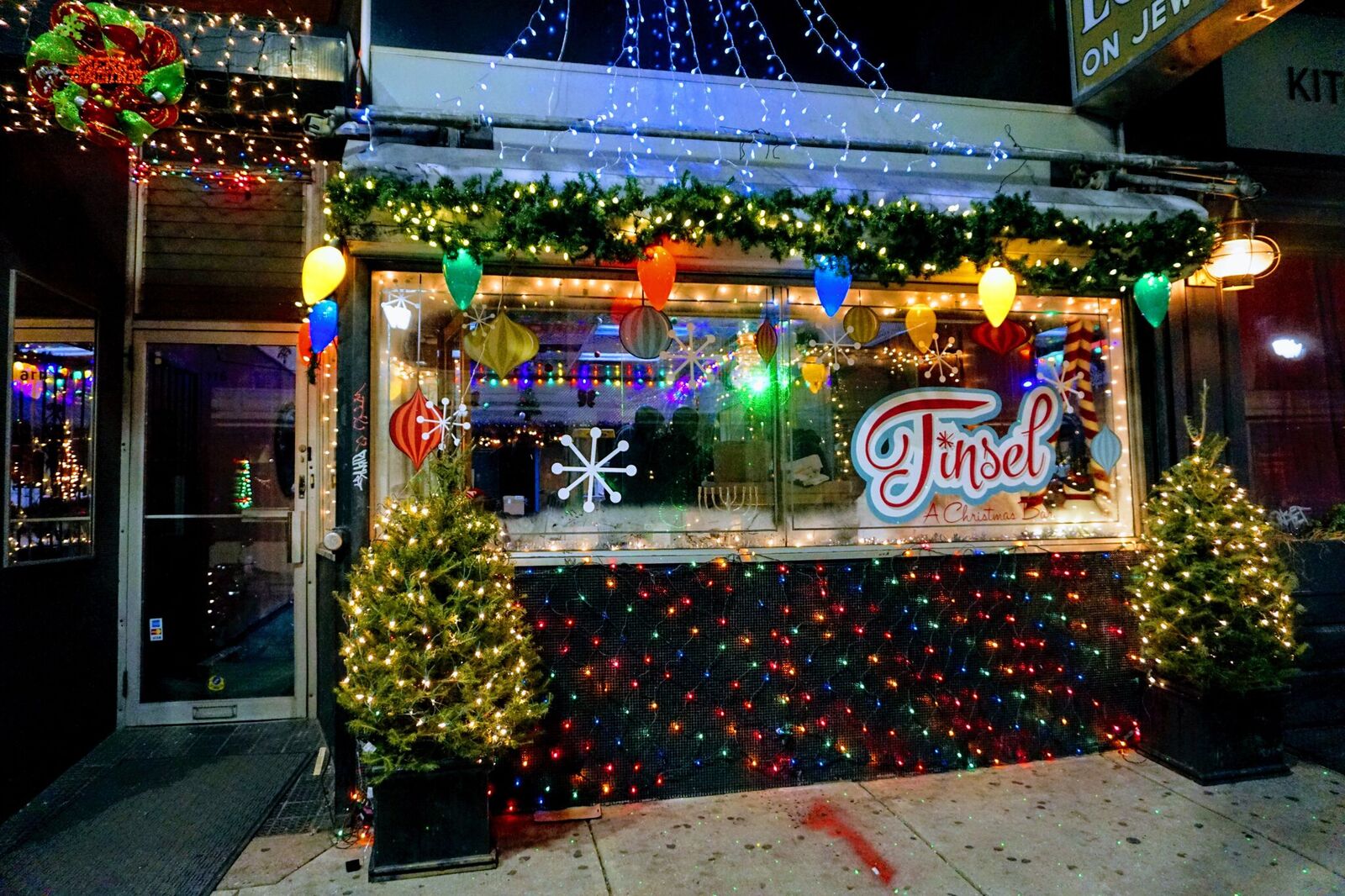 Teddy Sourias and Craft Concepts Group announce the grand opening of Tinsel Christmas Pop-up Bar at 116 S. 12th Street, Philadelphia. Midtown Village will get a little extra Christmas cheer with this new holiday-themed cocktail concept that will take over the space formerly occupied by Simpson’s Jewelry, and it will be open between December 8 to December 31, 2017. The former jewelry store moved out of the space less than a week ago and the mad elves from BRU Craft & Wurst, Cinder, U-Bahn, Uptown Beer Garden and Finn McCool’s Ale House have been working night and day to get the new concept ready for its debut this weekend. Tinsel will be open Tuesday through Thursday from 5:00pm to 10:00pm, Friday and Saturday 2:00pm to Midnight, and Sunday Noon to 5:00pm. Tinsel will offer happy hour specials Tuesday through Friday 5:00pm to 7:00pm with $5 select Christmas Cocktails and all drafts. Tinsel will end the season with a special New Year’s Eve send-off party on December 31, 2017. Details of New Year’s Eve and other special events will be announced shortly.

“We are excited to continue the expansion of Craft Concepts Group in Midtown Village,” said Sourias. “We purchased the 116 S. 12th Street building for future development and we wanted to keep the space activated. Our managers and teams from our other bars and restaurants came up with the idea to do something in the winter when we have downtime from Uptown Beer Garden. Tinsel lets us have some mid-winter fun outside of beer garden season – and lets my team showcase their creative abilities in customized this unique jewelry store setting. The space also gives us the opportunity to definitely expand out of our comfort zone and showcase our fun and super playful side. Come join us for some Christmas cheer!”

Tinsel will offer a full selection of liquor and spirits, Christmas cocktails and all-speciality Christmas beer drafts. Drafts will focus on American and Belgium holiday specialty ales and beers throughout the season – with starting selections being:

Christmas cookies, appetizers, sandwiches and holiday specials will be available to order.

The space features three rooms decked out from floor to ceiling in the most festive decorations, wrapping and holiday lights – including a custom Krampus mural, a toy train in the front window, a glowing fireplace art installation over the former diamond safe, a festive holiday tree, and even Santa Claus himself. The 1,100+ square foot space will include community high top custom wooden counters, a 25 foot bar along the former jewelry counter and 12 bar stools at the main bar.

The custom Krampus Mural and fireplace art installation are designed by local artist Scott Johntson who is known for his work at Silk City Diner and Franky Bradly’s. He also has designed art pieces in the past for BRU and U-Bahn over the last two years.

Tinsel’s Krampus waits for those who have been naughty and not nice this year. The character is inspired from German folklore that is often described as half-goat, half-demon who during the Christmas season punishes children who misbehaved. Find out if you need a visit from the Krampus!

The former jewelry store vault by Marvin Safe Company serves as the centerpiece between the two main rooms and is six foot tall by four foot wide.

The 100+ year former jewelry shop passes the baton from the sparkle of diamonds to now the twinkle of hundreds of holiday lights. Tinsel brings new life into the street level space  that is now vacant in the building that Sourias and family recently purchased for a new concept to be announced in 2018.

Tinsel joins the ranks of Craft Concepts Group that now includes BRU Craft and Wurst, U-Bahn, Cinder, Finn McCool’s Ale House and Uptown Beer Garden. The group’s newest restaurant, Tradesman’s, will open at 1322 Chestnut Street in late winter as a BBQ and beer hall next to neighboring U-Bahn and BRU.

Simpson’s Jewelry was a family run, full service, jewelry store which was established in 1895.

Continue Reading
You may also like...
Related Topics:midtown, tinsel

The Blue Cross RiverRink is Counting Down to Christmas With Free Classic Christmas Movies!
Check Out Our Recap of This Year’s Running of the Santas!