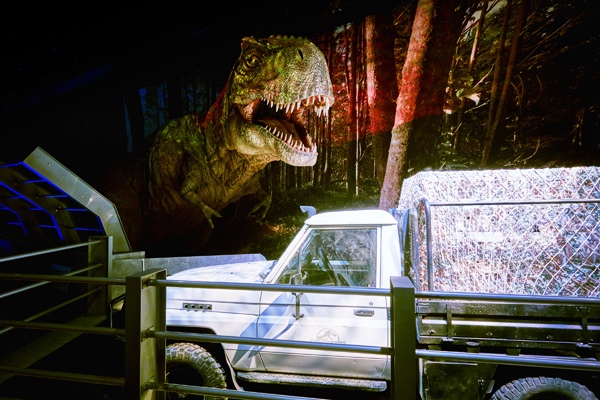 Jurassic World The Exhibit is Coming to the Franklin Institute

I can still hear the theme song in my head and remember playing the video game for hours on end.  Now the prehistoric movie that captured the world’s imagination is coming to Philly! The Jurassic World Exhibit debuts at the Franklin Institute November 25th and will run until April 23rd.

NBCUniversal and Imagine Exhibitions, the driving forces behind this monumental exhibit are not pulling any stops.  This exhibit will be larger than life and will allow visitors to “get closer to dinosaurs than ever before.”  Based on one of the biggest blockbusters in cinema history, the Exhibition immerses audiences of all ages in scenes inspired by the beloved film.  Now, the park that was only a promise comes to life…right before your eyes.  Guests will get to check out the constructed Isla Nublar Park which will feature life-sized animatronic dinosaurs.

Cool added features include a sneak peek inside the “Creation Lab” and learn about the real science behind some of your favorite dinosaurs.  Created in close collaboration with renowned paleontologist Jack Horner, the Exhibition is infused with interactive educational elements—drawn from the real-world science of dinosaur DNA that allowed Jurassic World to come to life. Visitors of all ages can now learn all about these incredible prehistoric creatures.

Don’t miss the awe-inspiring journey into Jurassic World: The Exhibition, making its North American debut at Philadelphia’s The Franklin Institute on November 25, 2016 for a limited time. Sign up today to be added to an exclusive pre-sale event giving you the opportunity to book your visit before the general public. And remember, if something chases you…run!

Mike Solomonov, The Chef Behind Zahav, Federal Donuts & Dizengoff Will Be Making Cheesesteaks at Pat’s
Dayumn! Over 100+ CRAFT & INTERNATIONAL BEERS WILL BE SERVED AT KING OF PRUSSIA’S BEERFEST ROYALE