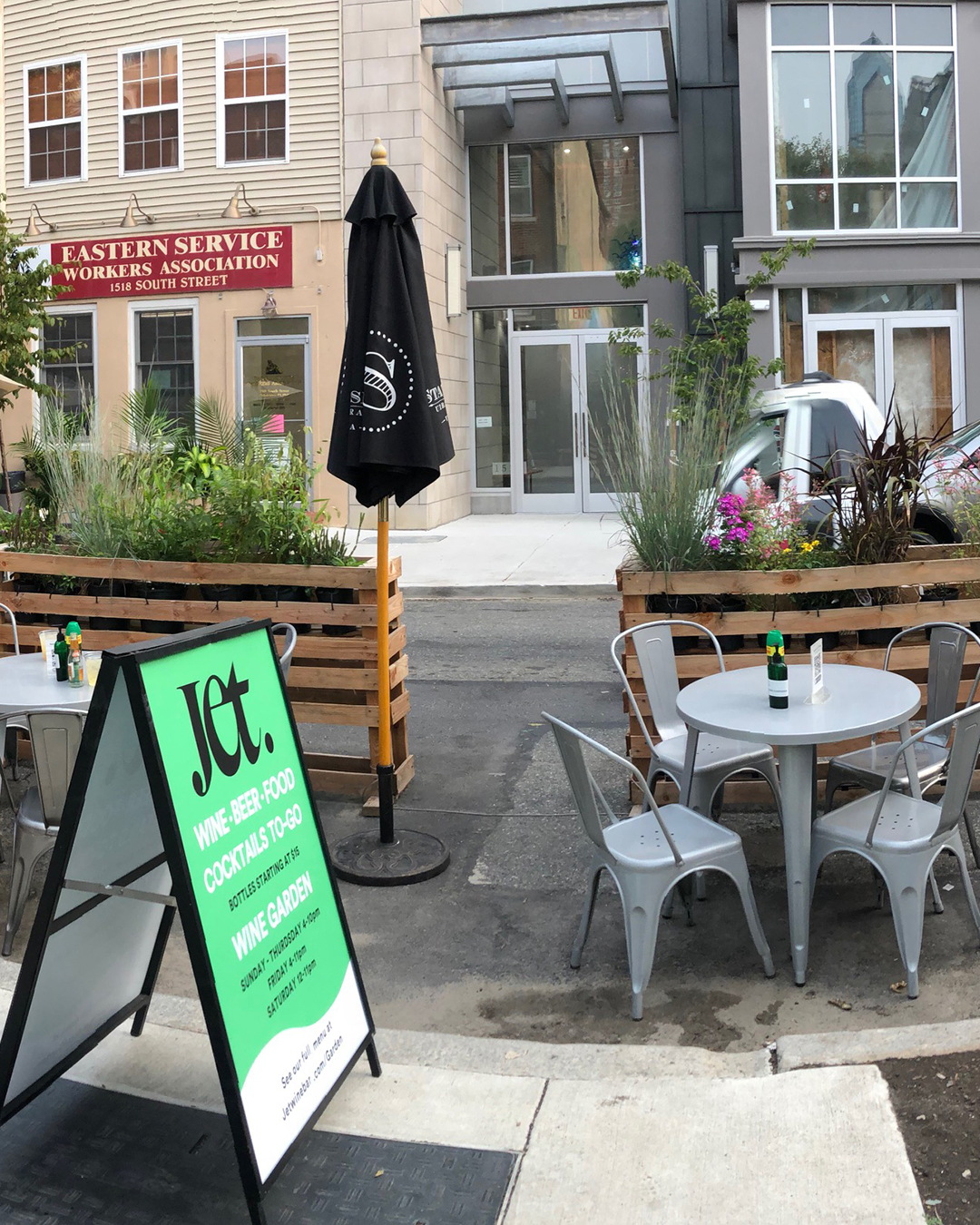 The Voter Project and Sojourn Philly are teaming up to present #PowerthePollsPA Wine Patio Pop-Up at Jet Wine Bar. Launching Thursday, October 1st  and running through Election Day, the parklet extension of the Jet Wine Garden will boast unique patriotic and pro-voter artwork from local artist, Oluwafemi, in order to raise
awareness for the dire need for thousands of new poll workers in order to ensure a safe and fair election for all voters on November 3.

Pennsylvanian’s are invited to raise a glass to democracy at the official unveiling of the mixed- media, interactive art installation on Thursday, October 1st, from 5p-8p. Patriotic patrons will enjoy a socially distanced meet-and-greet with the artist as well as The Voter Project representatives — who will assist in answering questions and signing up a new generation of paid poll workers who, in Philadelphia, will receive a total of $250 for their time. “A new generation of young and diverse poll workers is imperative to ensure that this election is fair and inclusive of all American voters,” said Jill Weber, owner of Jet Wine Bar. “We are proud to play our small part in The Voter Project and look forward to further highlighting #powerthepollspa within our community.”

Jet Wine Bar Owner and sommelier, Jill Weber, along with GM, Nick Baitzel, have curated a line- up of American wines including Cuvée 89 Rosé Méthode Champenoise Gruet ($14) made with grapes from Native American grape growers, Longevity Cabernet Sauvignon ($12) from acclaimed Californian winemaker, Phil Long, who is also the president of the Association of African American Vintners, and Eola Hills “Patriot” Blend ($14). Politically minded tipples featuring Bluecoat American Dry Gin such as the Pollster Paloma and Civil Celebration will also be available with DJ Aura providing the tunes.

Counties across Pennsylvania are in the midst of a massive poll worker shortage and it is critical that an estimated 15,000 workers are recruited before Election Day. This shortage has the potential to lead to voter disenfranchisement, such as long lines, and other obstacles to the voting process.

“Maintaining safe, in-person voting is critical for communities throughout Pennsylvania,” says Senior Advisor Susan Gobreski. “Everyone should be able to vote in a safe and convenient way, whether in person or by mail, and we need to recruit thousands of poll workers to fight voter intimidation and assist voters, especially those who have disabilities or need language assistance, at the polls.”

An overwhelming percentage of traditional Election Day poll workers are over the age of 60. Many of these poll workers are understandably hesitant to return to polling stations this Election Day due to the ongoing pandemic. Without younger and more diverse paid poll workers, our Pennsylvania voters have the potential to have similar long lines, long waits and disenfranchisement seen in state primaries such as Georgia and Kentucky. “I believe in this work,” says Precious Samuel, 33, of West Philadelphia, who as Director of
Outreach for The Voter Project’s Power the Polls PA campaign is working to get new poll workers signed up across Pennsylvania, and in particular making sure there is a new wave of people signing up. “Key is the need for young, healthy, and diverse poll workers.”

For the general election, more paid poll workers are needed to ensure a smooth voting process for all. That’s why Samuel and others are working on a statewide initiative to bring in thousands of more poll workers. All poll workers throughout the state will receive Personal Protective Equipment on Election Day provided by Power the Polls partners and those interested in signing up should visit TheVoterProject.com to learn more. #PowerthePollsPA is a collaboration among nonprofit organizations, businesses, and civic
organizations such as Civic Alliance, Comedy Central, Fair Elections Center, MTV, Pizza for the Polls, and We Can Vote.

Poll Worker Facts:
• Poll workers get paid for their time
• Poll workers generally work the entire day from 7 a.m. to when the polls close at 8 p.m.
• Counties throughout the commonwealth train poll workers on Election Day duties
• Being a poll worker is an additional way to participate in the election process
• A Nationwide goal is set to recruit 250,000 Americans who are interested in signing up to be
Election Day workers or
volunteers to keep all polling sites safe, readily open, and available for delay-free, in-person
voting

Art in the Age is Launching Cocktail Workshops Just In Time For The Holidays!
Northern Liberties is Hosting A Monster Mash Bloody Mary Challenge!