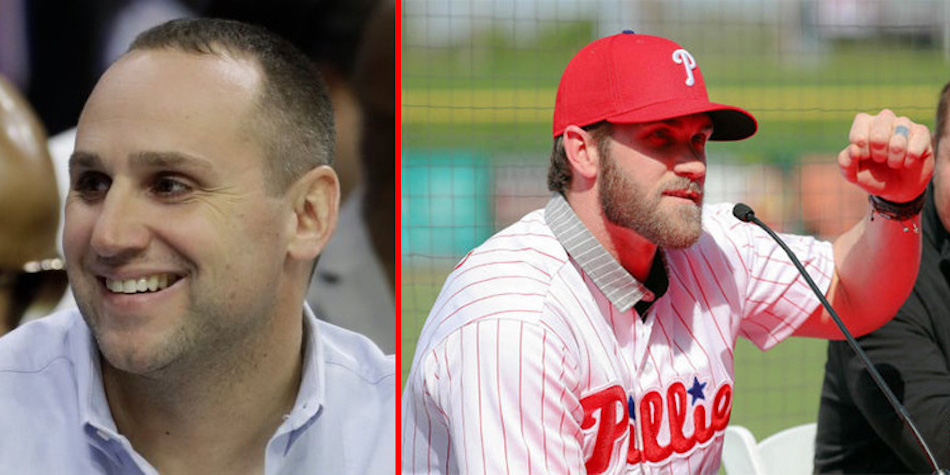 So the Phillies aren’t the only ones looking to cash in on Bryce Harper’s talents here in Philly.  Just across Pattison Ave. Sixers owner Michael Rubin is cashing in on the Bryce Harper frenzy as well.  How you say?  Well, back in May of 2017 Michael Rubin’s company Fanatics Inc. which is the the world’s leader in licensed sports apparel, purchased Majestic.  Majestic which most know is the exclusive provider of MLB uniforms.

Considering that Bryce just signed a 13 year no opt out contract, Phillies fans flocked to the stores and online retailers to get their Harper jerseys.  As the customers racked up on Majestic jerseys, Michael Rubin has been laughing all the way to the bank.   Rubin’s company Fanatics Inc. purchased Majestic for a $225 million.  The Lehigh Valley based Majestic was struggling to stay open at the time of the acquisition.  After saving Majestic from going under, Rubin was credited for saving over 600 jobs.

Although, Majestic is the official provider of Major League Baseball uniforms, their contract is soon to be expired.  In fact their contract will run out December 31st 2019.  After which Under Armour will become the exclusive uniform provider.  However, Under Armour has pledged to use the Majestic plant to produce their product while Fanatics Inc. will handle distribution.

Welcome to Philly @Bharper3407 !!!! you’re selling a lot of jerseys for us!!! (@Fanatics and @majesticathletic )😂😂 We appreciate you bro!!! Philly sport fans are the best – Phillies gear up more than 5,000% vs the same day last year and Bryce Harper broke the record for the best 24 hours of sales for a launch of a jersey ever (for any player in any sport)!

This Bryce Harper Commercial For Playstation’s The Show 19′ is The Best Thing You’ll Watch Today!
Miracle at The Link: DeSean Jack is Coming Back to the Eagles!