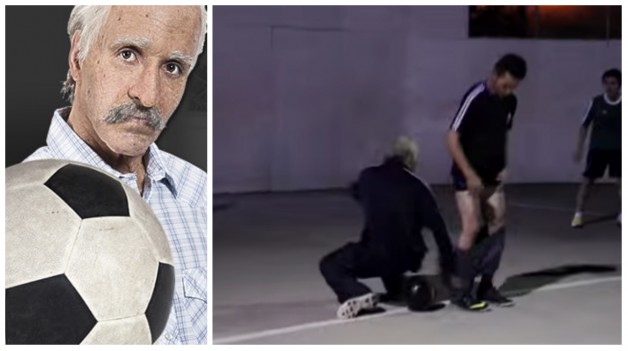 You may or may not have seen the Kyrie Irving Pepsi commercials where he is disguised as an old man and plays with unsuspecting guys at a local park.  At first they are under the assumption that Kyrie is simply an old man trying to relive his youth until Kyrie breaks out the skills and puts everyone to shame.

Well this concept was duplicated but instead of bball it’s soccer err we mean futbol.  In celebration of the upcoming World Cup we thought this was a cool commercial.  World Freestylve Soccer Champion Sean Garnier was disguised as an old man and joined a pick up game at a local park.  At first he was letting them get the better of him. Then as you will see the tables quickly turned.  Enjoy!

VIDEO: Judge Fist Fights Lawyer During a Trial
Heartwarming video of a Man With Alzheimer’s Who Doesn’t Forget to Buy His Wife Flowers