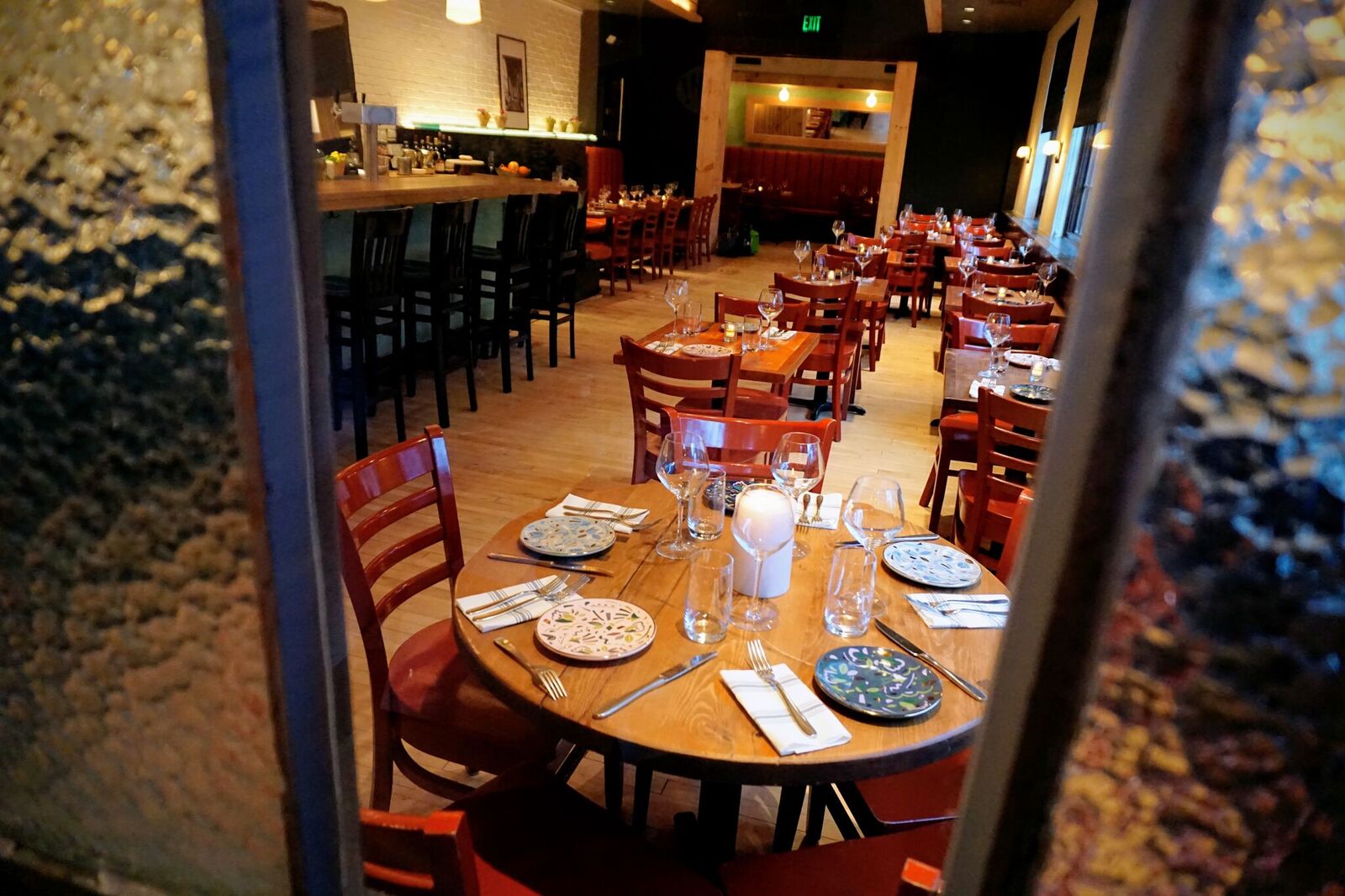 Restaurateurs Bridget Foy and husband Paul Rodriguez announce the grand opening of Cry Baby Pasta at 4:00pm this Friday, January 18, 2019 at 627 S. 3rd Street. Cry Baby Pasta will mark the couple’s much-anticipated return to the Philadelphia restaurant scene following the tragic fire that destroyed the original family restaurant named after Bridget at 2nd and South in 2017. While waiting for Bridget Foy’s to be rebuilt (with tentative opening this fall) the couple decided to open their first restaurant together – something the couple has dreamed about doing for many years while working with their parents John and Bernadette at Bridget Foy’s. Cry Baby Pasta will offer a casual, warm and playful atmosphere with a menu focusing on Italian fare prepared by husband-and-wife team chefs David Gilberg and Carla Goncalves. At the bar look for a deep wine program offering smartly priced wines by the glass an bottle, plus a full bar with craft beer, cocktails and spirits. Opening hours are seven days a week with bar opening daily at 4:00pm and dining room opening at 5:00pm daily. Look for dinner service to start with possible lunch and brunch to follow later. Happy hour will launch in mid winter. For reservations visit or call http://crybabypasta.com or call (267) 534-3076. Cry Baby Pasta is one of eight new restaurants and eateries coming to South Street Headhouse District this year – making it a record for recent years for the Queen Village and Society Hill food scene.

“We are thrilled to return to doing what we love,” said Bridget Foy. “We want to thank each and every person for sending their love and support during the difficult time after the fire. We had an outpouring of support from not only our amazing customers and locals – but from people around the region and the East Coast. We are so excited to reopen Bridget Foy’s later this year – and in the meantime get back to being the hosts in our brand new restaurant Cry Baby Pasta. We hope to make new memories with everyone at what we hope will become a neighborhood staple – and we can’t express how excited we are to open our doors this week. It isn’t the journey we imagined, but from the fire it led us to a new adventure and we can’t wait to share it with everyone.”

Cry Baby Pasta is approximately 2,000 square feet, and will feature a 55 seat dining room, with a twelve seat oak bar and five seat drink rail. The food menu was designed to match, with the goal being casual, shareable and fun – yet top quality. Prices were designed to be approachable and smart – to match the needs of the neighborhood.

Cry Baby Pasta is focused on a fun, casual, modern and colorful atmosphere – with a menu to match that features comforting and homey Italian fare that is shareable, craveable and crowd-pleasing. Dishes are designed to about forward and fresh flavors – with everything prepared from scratch. The wine program pairs with affordable selections to more expensive Italian gems – the list goes deep and will be expanded over time. Wine and craft beer are available on tap.

Foy and Rodriguez wanted to create another neighborhood staple – where you can be yourselves and enjoy great food and drink. When Foy’s closed due to the fire, the couple had a lot of unexpected and sudden free time and started to go out to eat more – and discovered a void for a casual Italian neighborhood restaurant with bar program. They found a lot of fine dining spots, precious BYO’s, old school Italian restaurants and red gravy joints, but they wanted what Bridget calls a “rock and roll pasta and wine bar” where you can have fun, have lively conversations, enjoy your love of pasta, have a glass of wine (or two) and see familiar faces.

“Before the fire at Bridget Foy’s we were used to working long days plus taking care of our two children,” explained Foy. “After the fire, we immediately were left with void and we started going on date nights more and eating around town – a luxury we didn’t have before. I love pasta and wine – and we couldn’t find a casual, modern, fun restaurant that I could enjoy both together. Philadelphia is so rich with fine dining Italian, red gravy joints and old school Italian – but we saw this need and wanted to design a restaurant for people like us that want to share great wine and food with our friends over stories in an atmosphere we could be ourselves. This isn’t your precious BYO where you have to whisper. I call it a rock and roll pasta bar – where you can let your hair down and be yourself – share dishes – find something for everyone – with our fun and quirky style of branding and design.”

In the kitchen, Bridget and Paul have teamed up with the husband-and-wife team behind the former three bell reviewed Koo Zee Doo), David Gilberg and Carla Goncalves.  Gilberg and Goncalves will operate the scratch kitchen which will specialize in Italian fare, such as simply presented crowd pleasing house-made pastas, sides, starters, bruschetta and large plates. Look for everything to be made from scratch including the pasta, bread and pastries. Dishes are simply presented, with forward and fresh flavors – and featuring seasonal vegetables.

Menu selections were inspired by both the couples’ work together this past summer and the two couples’ recent research trip to Italy. This past summer, the two couples worked together in the Thousand Island region and where Gilberg is from (Rochester). The menu was also inspired by the two couple’s trip to Blogna Italy, where the four visited in September the day after the Cry Baby Pasta lease was signed. They researched the food and wine of the region. The final menu reflects Italian “North Country Cuisine” of Central and Upstate New York – like the Rigatoni or as they say in New York “riggies” and Bainbridge Greens playing off of Utica Greens. Selections inspired from the trip to Italy include Tortellini with Pork And Parmesan Filling, Broth – and Tagliatelle Bolognese Classic Ragout, Parmesan.

Foy and Rodriguez met their new chef team when they applied to a Craigslist ad for summer help for the restaurant and hotel that Gilberg and Goncalves were running.
Foy and Rodriguez had been looking for an opportunity to get away from Philadelphia following the fire and clear their heads – and plot a new course while waiting for Bridget Foy’s to be rebuilt. They wanted to also stay busy and do what they love doing in the hospitality field. They replied to the ad and received an interview request just hours later, the two couples met that very night, and they were hired and relocated to the Thousand Islands shortly after. At the end of summer, Bridget and Paul wanted to bring Gilberg and Goncalves in for their new restaurant – and have the best of both world’s with Foy and Rodriguez offering top notch hospitality in the front of the house, and Gilberg and Goncalves bringing their expertise back of house to the kitchen.

Notable on the menu is the option to have gluten free pasta substituted for any dish – which will be prepared and cooked separate for gluten free diners. Also, note the grilled sardine bruschetta from the kitchen. Gilberg and Goncalves were famous for their sardine dish at Koo Zee Doo

Cry Baby features a full liquor license and has a full line of spirits, six craft beers by the draft, four wines by the tap, 35 wines by the bottle, and an Italian inspired cocktail menu. Look for a quality value glass of draft wine around $8 and cocktails to be priced for the neighborhood at around $10 each.

Rodriguez has an extensive background in wines and spirits from his work at Amada, High Street on Market, Village Whiskey and other spots in Philadelphia and at the Jersey shore. During the couple’s trip to Italy, he researched and expanded his knowledge base around Italian wines to bring the neighborhood a deep and rich selection. Wines will start with an Italian focus but they may expand to other regions down the road. Look for two red, a white and a sparkling to launch on the wine taps, with about 15 white and 20 red bottles at opening.

Six taps are available for craft beer and cider – and one IPA and one cider will always be available on tap. The opening beer list is to be announced.

The vibe and atmosphere is playful, colorful, warm and comfortable – yet contemporary. Foy said they were aiming for light, open and airy, welcoming, casual and rebellious tone “with a big heart,” humorous notes and timeless roots. Bridget and Paul designed the final interior and lightened up the restaurant – and brought back a more comfortable and casual vibe that the space had years ago when it was the beloved neighborhood gem Judy’s Cafe.

“We went in and lightened up the entire restaurant from top to bottom,” added Foy. “Paul and our team really worked hard to strip all the wood from ceiling to floors and add our own creative touch to his well known neighborhood spot. We wanted to bring back the welcoming feeling you had when you entered Judy’s Cafe so many years ago – which my parents frequented regularly. We want neighbors to see each other and be comfortable to strike up a conversation over wine, but we also want to be that date night spot.”

Look for playful branding – as well as colorful and playful paintings and artwork that keeps it in the family with masterpieces from Bridget’s mom Bernadette and her husband and partner Paul. The Foy’s lost much of their family art collection by Bernadette in the fire, and she has been busy working on new pieces for Cry Baby Pasta and the new Bridget Foy’s!

Cry Baby Pasta will be open seven days a week, with the bar opening daily at 4:00pm and the dining room opening daily at 5:00pm. Sundays through Thursdays the kitchen will stay open until 10:00pm, and on Fridays and Saturdays look for the kitchen to stay open until Midnight. Potential weekend lunch or brunch service may come down the road. Weekday happy hour will launch later this winter. Look for catering and potential delivery down the road as well. Look for outdoor cafe seating to launch when the nice weather returns.

5 Reasons Why The Giant Supermarket Robot “Marty” is a Terrible Idea
A Cannabis Conference is Being Held at the New Beyond/Hello Dispensary in Center City!