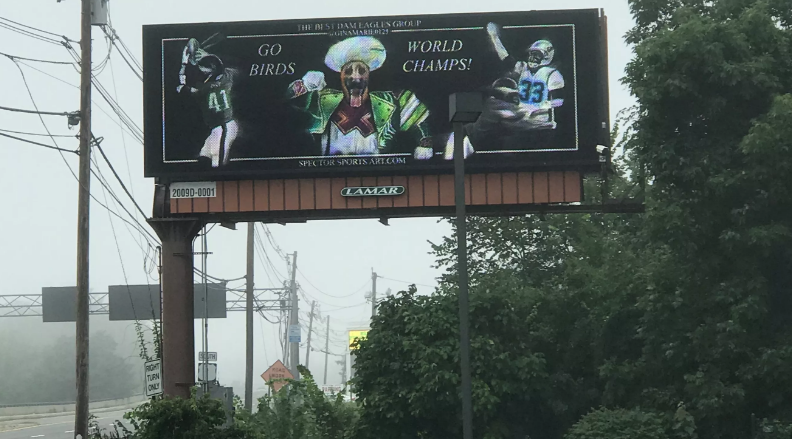 An Eagles Fan in Massachusetts Bought a Billboard Ad Near Gillette Stadium to Troll Patriot Fans!

“No one likes us and we don’t care,” has been the rallying cry after the Eagles clinched their first ever Super Bowl victory.  Widely considered some of the “worst fans” in the NFL due to our brashness and shit talking, Patriot fans had to see this one coming.  Massachusetts resident Gina Lewis, who is a self proclaimed “biggest Eagles fan alive” just bought a billboard ad near Gillette Stadium to troll Patriot fans.

The whole thing started back in June when Gina bet a co-worker that if she received 4,100 likes and 3,300 retweets on a Twitter post, he would pay to for a billboard of Tom Brady fumbling the ball during Super Bowl LII.

Gina Lewis’ tweet more than doubled the goal with 8,500 retweets and 14,500 likes. However, the co-worker couldn’t exactly hold his end of the bargain. Still determined to make it happen, Lewis sought the help of Philadelphia-based sports artist Jordan Spector to create the image and then started a GoFundMe page to raise money for the billboard.

The goal for the Go FundMe was set at $5,000 in order to pay for a month-long billboard ad.   It took less than 2 months to reach the goal and now the campaign is continuing to raise up to $10,000 to help pay Spector for the commissioned piece, with the rest of the proceeds being donated to the Carson Wentz AO1 Foundation.

Although the original text on the ad was “No one likes us and we don’t care!,’’ Jordan Spector stated on Twitter, that he had to change the wording “due to potential conflicts/a request from the billboard company.” ’The ad also includes Lewis’ Twitter handle and Spector’s website. So make sure you follow her and show your appreciation for this legendary Eagles fan!