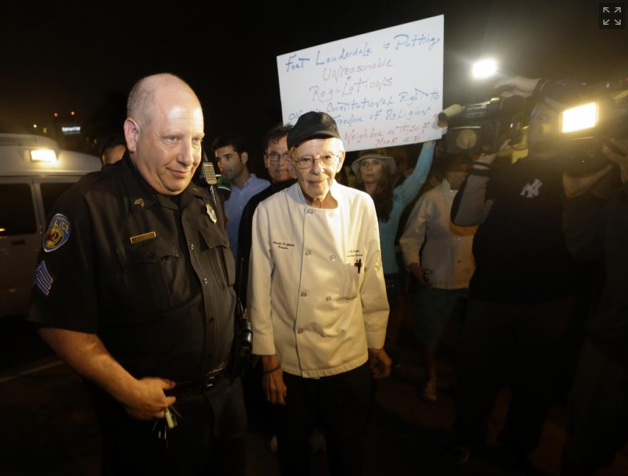 It looks like the officials in Ft. Lauderdale have nothing better to do then to harass a 90 year old man trying to do a great deed.  The south Florida city passed an ordinance last January that states people are restricted from camping, panhandling, food sharing and engaging in other “life sustaining activities.”

90 year old Arnold Abbott has gone against the ordinance twice in an effort to help his people, as he kindly puts it.  Arnold formed the charity Love Thy Neighbor which puts meals together in an effort to feed the homeless.  The first time he was arrested police intervened before he and his volunteers were able to get the food to the homeless.  However, his most recent arrest which came last Wednesday happened after 100 plates of hot chicken stew, pasta, cheesy potatoes and fruit salad were given to homeless men and women. However, a half dozen officers were on the scene and after observing Mr. Abbott and the volunteers for nearly an hour an officer instructed that they put the plates of food down while the other officers gathered the undistributed food and threw them directly into nearby trashcans.

When local reporters asked Mr. Abbott why he risks his freedom in order to feed the homeless he was quoted as saying, “Because these are my people and they deserve to be fed.” During his last encounter police instructed that Mr. Abbott and his volunteers put the plates of food down while officers took them and threw them directly into nearby trashcans.  If he is found guilty after his second arrest, Mr. Abbottt faces 60 days in jail or a $500 fine.