10 Motivational Instagram Accounts You Should Be Following - Wooder Ice 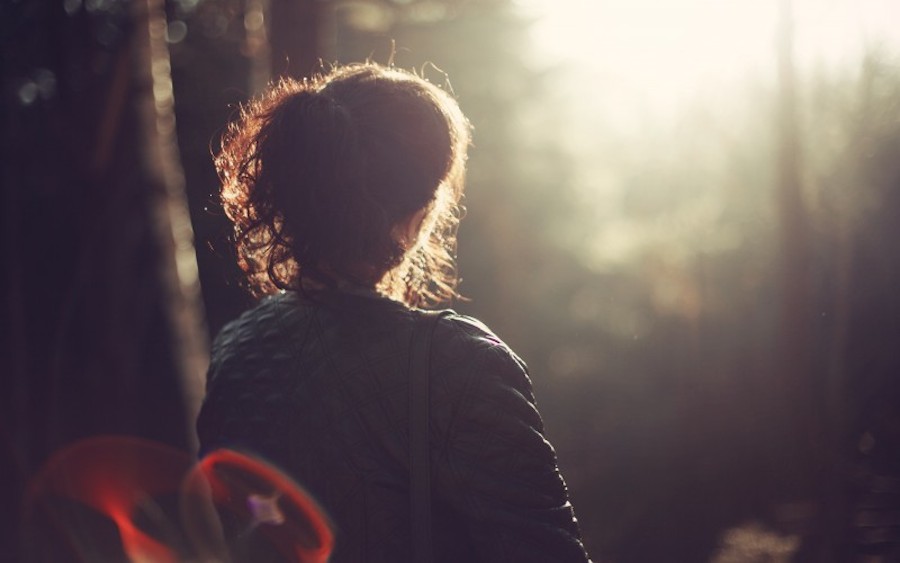 We can all use a little pick-me-up from time to time.  Whether it’s the stresses of school, work, family, relationships, inspiration and motivation can help us get through even the roughest of times.  Although the social media outlet Instagram isn’t the first source we look to in order to get inspired, it can serve as a great way to get an instant boost we may need during a work assignment, burning the midnight oil as an entrepreneur, or perhaps just looking to make it through the work week.  So for those that love to stay motivated here are 10 Motivational Instagram Accounts You Should Be Following. 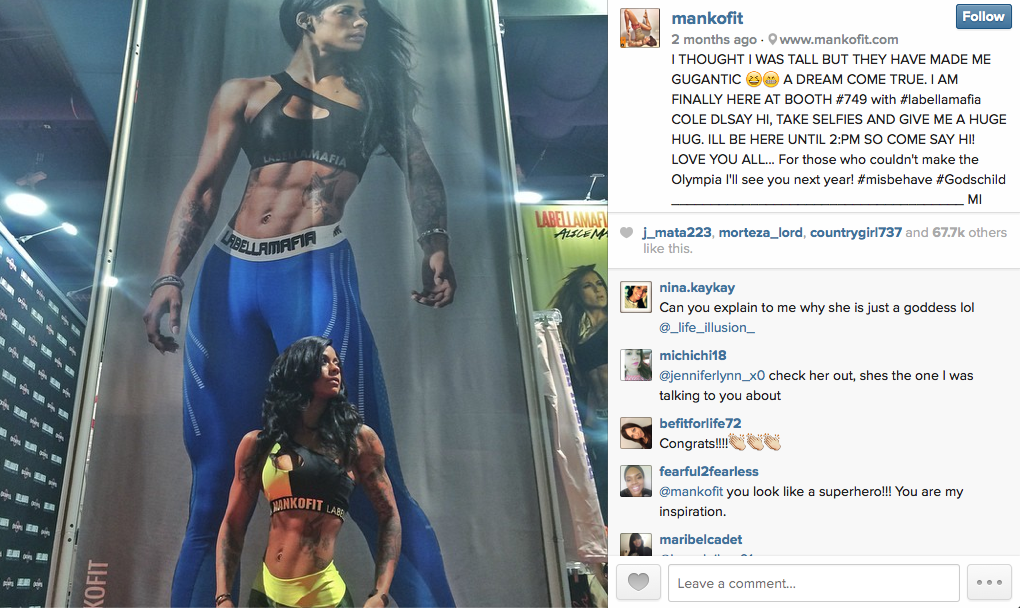 Massiel “Massy” Indhira Arias aka Mankofit is a NYC based personal trainer who posts motivational fitness photos, video, and recipes. As a former sufferer of depression, Mankofit continuously motivates her followers with inspirational messages in both English and Spanish with each post.  So if you are looking to get motivated in the area of health and wellness this is an account you need to be following. 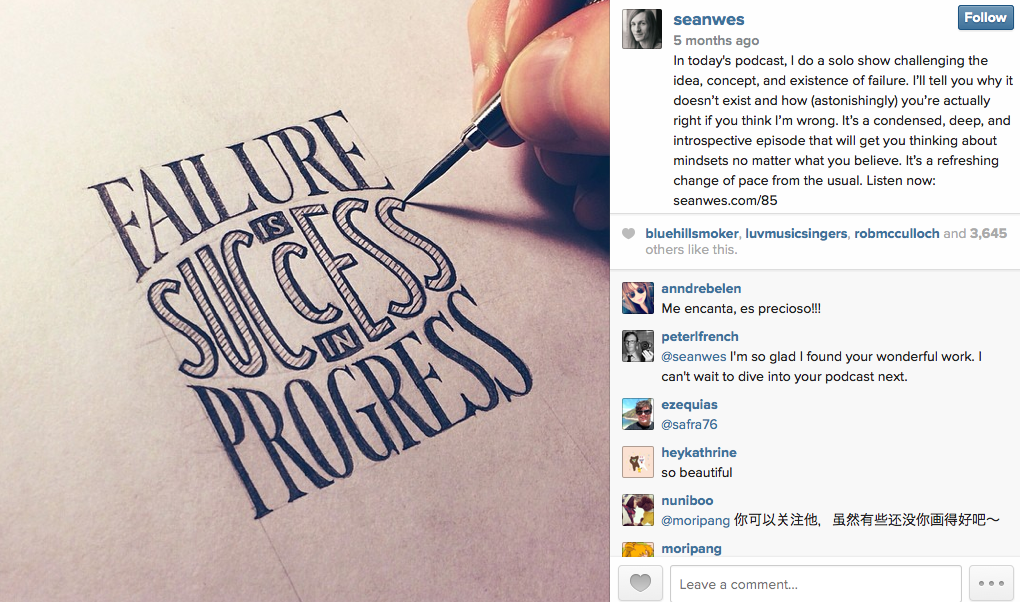 Sean McCabe is a lettering expert that hosts podcasts and instructional video on how to master lettering (similar to calligraphy).  He uses his masterful handwriting to display beautiful works of art that double as motivational quotes. Sean originally started off his career as a computer repair parts but soon learned he had a gift of inspiring and motivating people around the world. 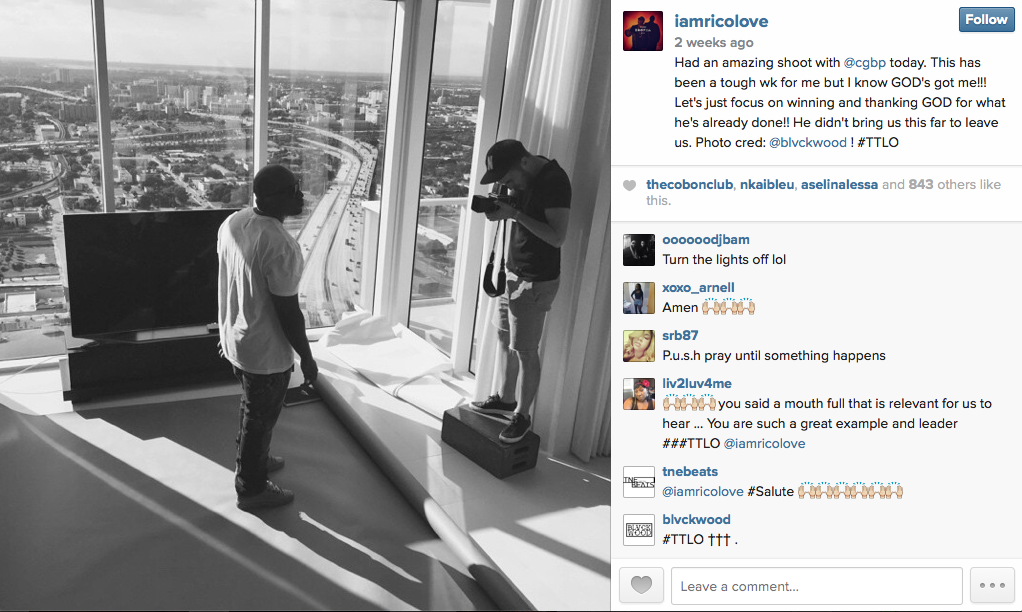 Rico Love is a singer/songwriter that has penned many R&B hits most notably for Usher.  Most of his career has been behind the scenes creating songs but Rico has recently ventured out to seek success in front of the cameras as a singer.  His Instagram account gives an inspiring look at what it’s like to grind in the music business and balance family in the process.  His captions are often times inspiring and insightful. 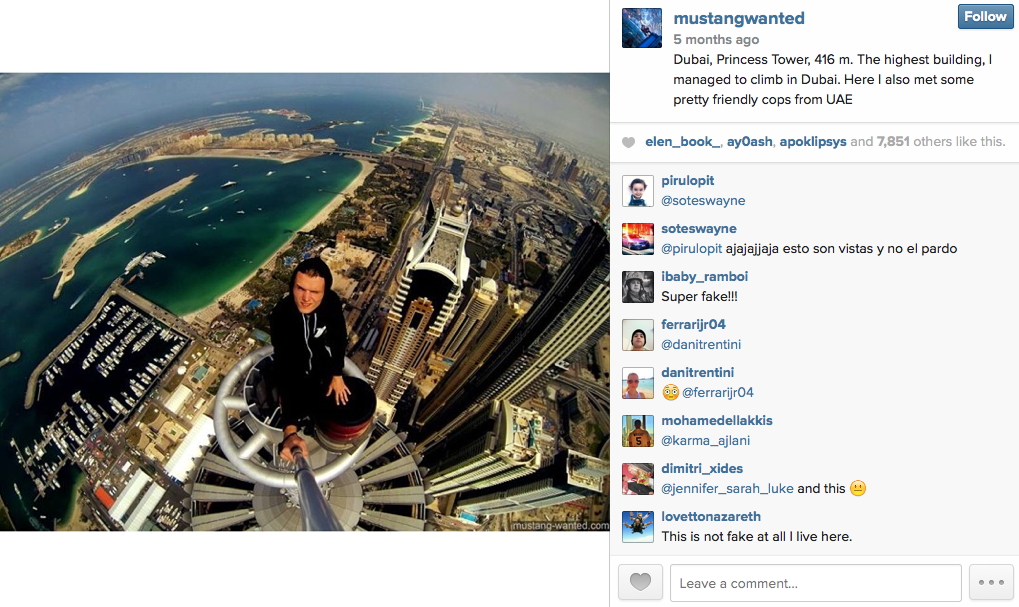 This Ukrainian daredevil uses the pseudonym Mustang Wanted and also goes by Heorhiy (Grigory) and has claimed his fame as an urban climber who scales buildings of obscene heights in order to snap breathtaking selfies and videos. The winner of the 2014 Troublemaker Award, Mustang Wanted makes our list because his account shows that many obstacles we face are psychological and he inspires us to climb further in life and to do what makes you happy.  The kid is famous for doing something we loved doing as a kid, how can you not be motivated.  We do urge everyone not to try his stunts. 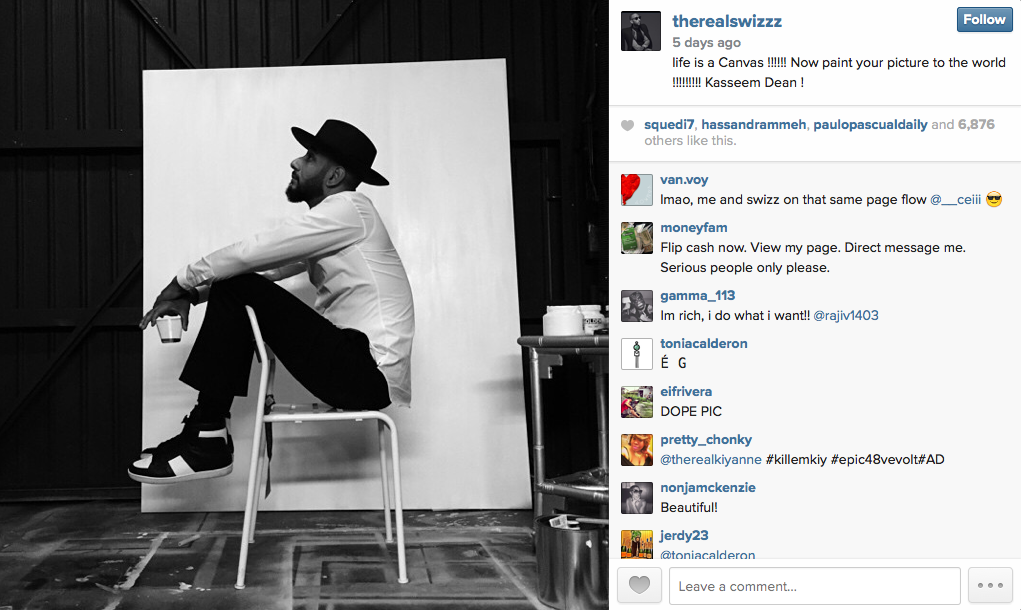 You may know him from his early Ruff Ryder days, or by the mega hit songs he’s produced, or simply as Alicia Key’s husband.  Either way Swizz Beatz or Kasseem Dean (his government name) has managed to reinvent himself as a renaissance man.  He has chronicled his journey through Harvard Business school, his passion for the arts, as well as his commitment to his family.  You’ll find nothing but positive messages and motivational posts that seem a far cry from his 90’s hip-hop persona but we actually like the new mature and grown-up Swizz. 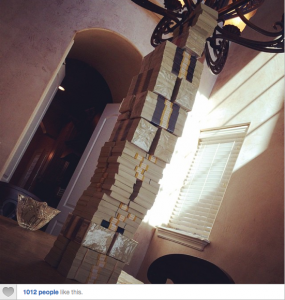 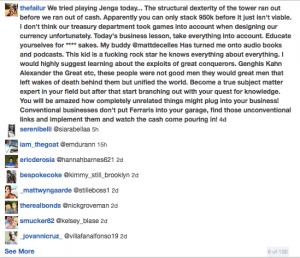 Chris Shirley is business tycoon that shares his business tips in a unconventional yet effective ways.  While most billionaires and multimillionaires tend to be give advice in a subtle manner, Chris is unapologetically loud and in your face.  It’s not uncommon to see a stack of a million dollars or exotic cars. At first glance you might think he is just showing off but he uses his posts as motivation and he gives out business advice within his captions.  Often times his posts are profanity laden but who doesn’t need a swift kick in the ass once and a while. 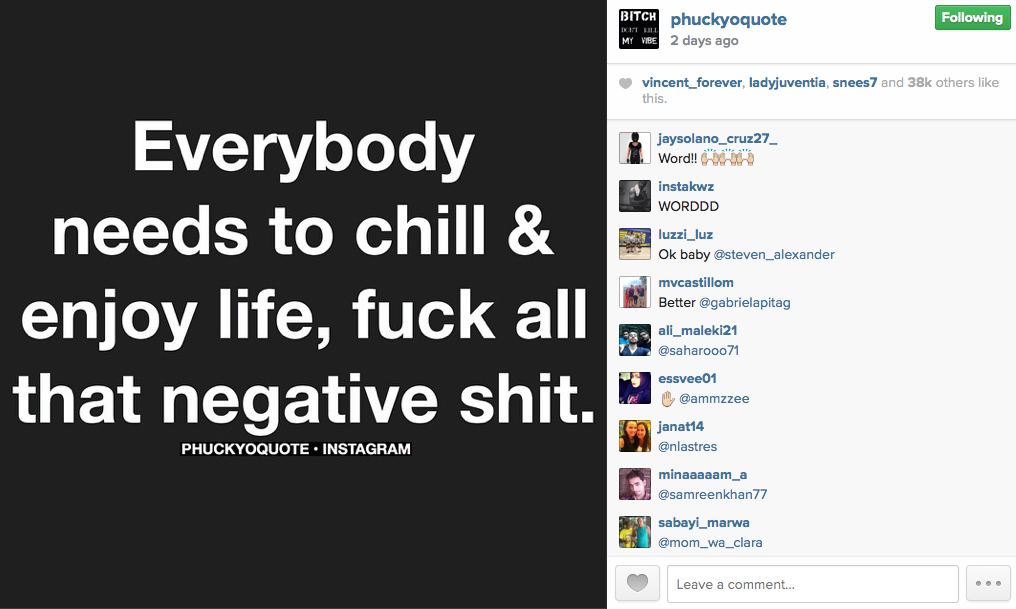 @phuckyoquotes is the ying to @seanwes’s yang.  Where Sean gets his points across with beautifully scripted quotes, Phuckyoquotes uses hard, blunt quotes to motivate on a more stringent level. Simple yet effective, this profile works wonders whenever you need a pick-me-up when life is kicking your ass.  If the attitude of this account was a person, it would be a Philadelphian. 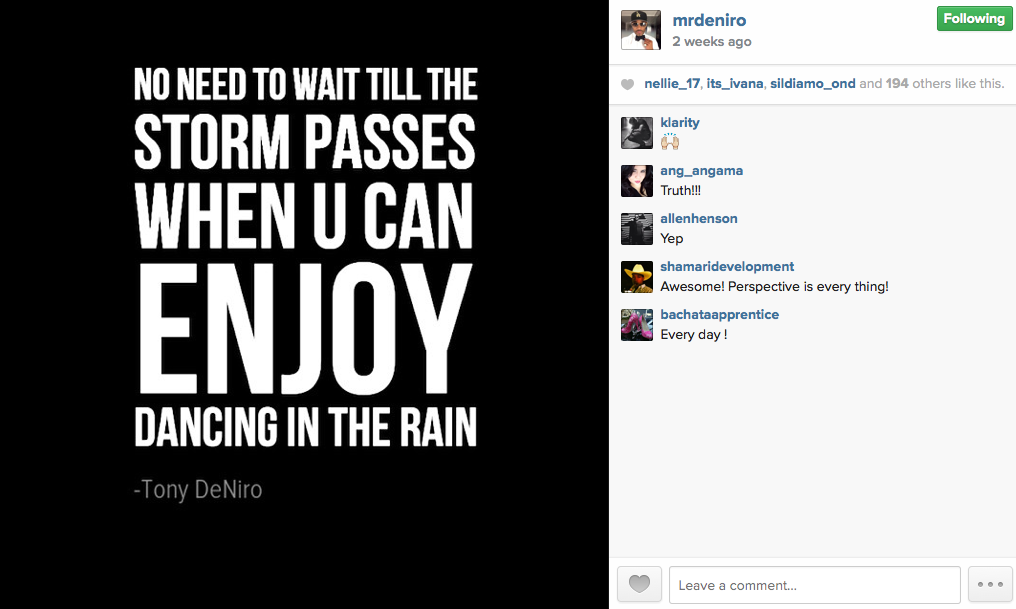 Tony Deniro’s life reads like a book.  He won the national championship as an All-American wide receiver at Notre Dame, short stint in the NFL, became a music exec for Priority records, became a fashion model, created Pheed.com, and has become the go-to internet adviser/consultant.  He was one of the original 100 users of Myspace and apart of the initial 5,000 users of Instagram.  This pioneer/free thinker constantly encourages his followers to follow their dreams and steer clear of being “normal.”  His page is a mix of @phuckyoquote & @therealswizz.  This guy is the real most interesting man in the world. 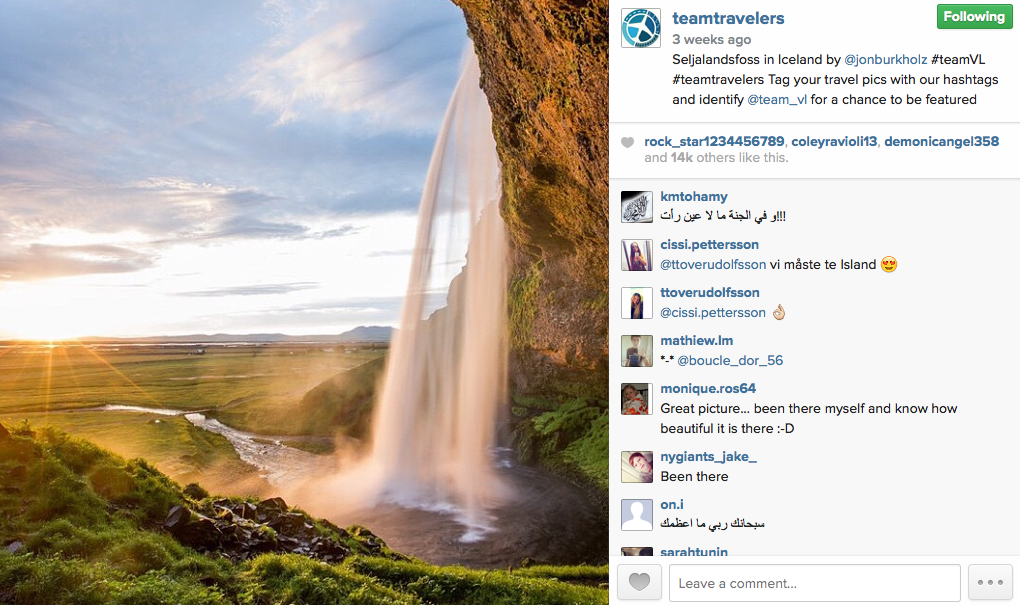 Sometimes motivation comes in the form or a sandy beach, a tropical forest, of a barren dessert.  This account gives those who aspire to travel motivation to do so by posting exotic and rare photos of foreign lands. Every post is picture perfect and every post sparks and urge to travel.  So for those sitting at work and need ideas or inspiration to travel, this is the perfect account. 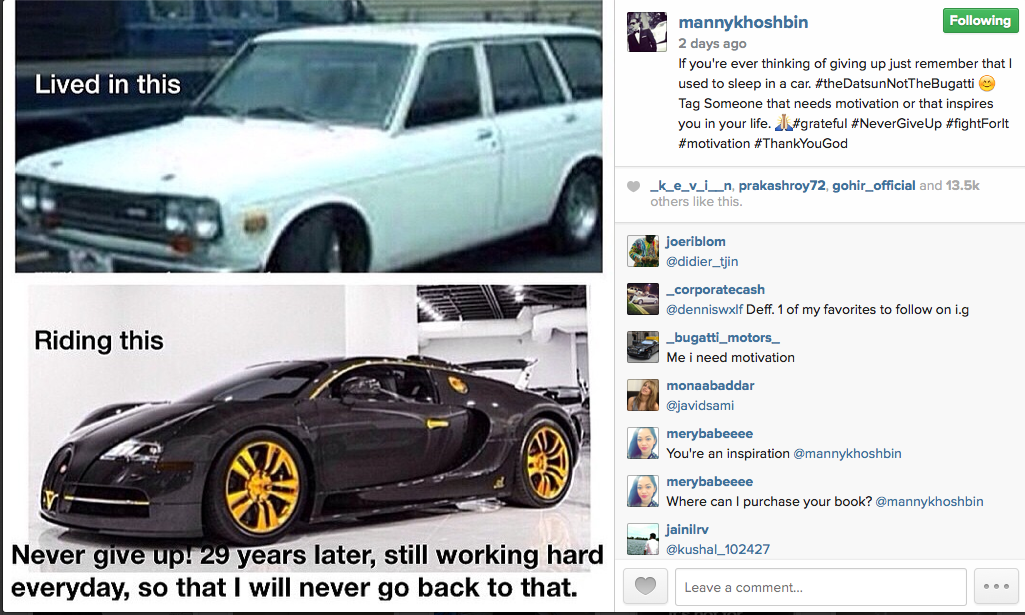 Last but certainly not least, Manny Khsoshbin rounds out our top 10 list.  A self made multimillionaire, Manny’s story reads like it was made for the big screen.  Growing up piss poor Manny started and failed at several businesses until he found his niche in real estate.  After working as a loan officer he eventually started his own firm and the rest is history.  He now uses his account to motivate his followers.  Although, his account may look like he’s flaunting his lavish lifestyle, his captions are filled with encouraging words that urge everyone to work hard and follow their dreams.