7 Reasons Why Sixers Owner, Michael Rubin's Instagram is the Most Poppin' IG in Philly - Wooder Ice 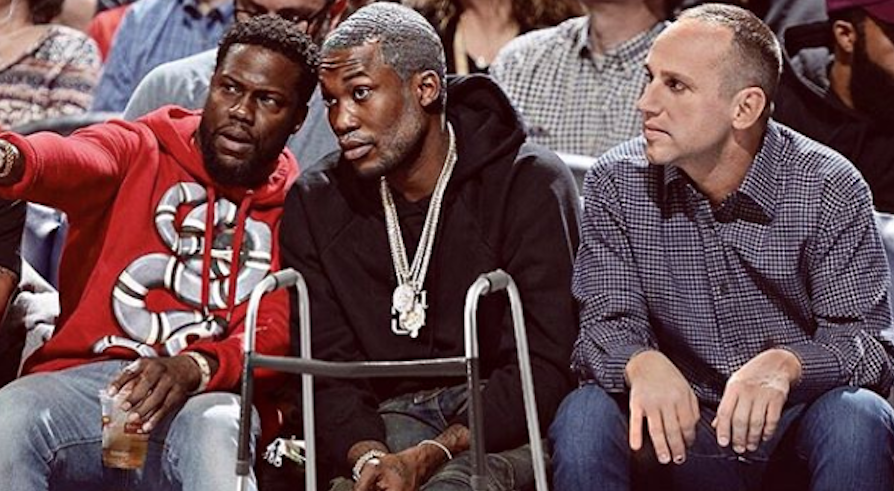 7 Reasons Why Sixers Owner, Michael Rubin’s Instagram is the Most Poppin’ IG in Philly

7 Reasons Why Sixers Owner, Michael Rubin’s Instagram is the Most Poppin’ IG in Philly

At first we just dismissed him as a billionaire sports franchise owner trying to be cool.  Just being honest here.  However, as Michael Rubin began to populate his gram a more complete picture started to emerge.  It wasn’t some spoiled filthy rich white guy trying to be down.  Instead we see a caring self-made mogul who is using his platform for the greater good.  No cringy bragging but strait motivation, inspiration and plenty of comedy.

So if you’re looking for some great content and entertainment on the gram here are 7 reasons why Sixers owner, Michael Rubin’s Instagram is the most poppin IG in Philly.

His Pranks With Embiid

When Joel Embiid came to the Sixers his social media quickly went viral.  Embiid’s sense of humor and ability to troll quickly became legendary.  However, what if I told you the troll gets trolled?  Embiid and Michael Rubin almost have a “Step Brothers” vibe in their relationship. Over the summer  they both went on vacation to Atlantic Resort and Michael trolled Embiid because he couldn’t swim and was too scared to go down the water slide.   Then shortly after that Michael trolled Embiid about a possible engagement.  Embiid tried to counter but Mike’s troll game was too strong.  It’s super entertaining seeing these two go back and forth but Micahel Rubin seems to always get the upper hand.

This took us exactly 37 minutes to convince @joelembiid to go down the slide. He only got in and out 6 times before he went!!!!! #LeapOfFaith

Almost lost my little bro @joelembiid in the lazy river… When do we tell him all he has to do is stand up?? Then the retaliations began @camillefishel

Thank you @joelembiid for the kind birthday wishes!! I also wanted to congratulate you on your MARRIAGE – Although it seems your bride is too embarrassed to want to reveal herself!!! She’s a lot smarter than I thought LOL

He Gives the Exclusive Behind the Scenes to The Hottest Events

Do you remember when Meek Mill popped up at the Drake concert and they made amends? Not only was it Michael Rubin’s IG video that went viral but he also foreshadowed the whole thing with a pic of Drake credentials on Meek Mill’s arm.  Then after the concert Michael Rubin showed Drake and Meek casually playing ping pong.  This was just one example. Mike seems to be at all the hottest events and in the mix whenever there’s breaking news with Meek.  Remember the whole helicopter out of jail thing?  Well, that was Mike’s chopper and he had all the exclusive video on this IG story.  So if you want to see what it’s like attending dope events as a billionaire, Mike’s IG is where it’s at.

His Odd Yet Hilarious Relationship With Robert Kraft

Considering the fact the the Eagles faced the Patriots in the Super Bowl twice, you’d think the hate for the Pats would run pretty deep.  The media paints the franchise as the dark side of the NFL with cheating scandals and stern press conferences.  However, Michael’s gram shows a different side.  Pats owner Robert Kraft some how became BFFs with Michael Rubin and the two seem almost inseparable.  Robert has been spotted at Kevin Hart shows, Meek Mill shows, Drake shows, and just about every other hot ticket in town.  Hell, they even went to Vegas together.  Although what happens in Vegas stays in Vegas, we can only imagine the dope shit they got into.  Think two billionaires who are chillin with the hottest rappers and athletes in the game.  You do the math.

CONGRATS to my “little bro” Robert Kraft! Today was his #300th win – making him the fastest owner in NFL history to win 300 games!!! #patriots

Philly gave Boston a lesson on how to do Vegas!! PS. Meek u might want to get that jail weight off 😭😂

Big debate about whether @kevinhart4real should play for the Sixers or the Patriots! Lol Seriously Kev you killed it tonight!

His Backstory is Motivational!

It’s easy to dismiss Micael Rubin as just another billionaire who grew up with a silver spoon in his mouth.  Did he have an advantage? Sure.  But he still decided to make it on his own, without the assistance of his parents.  Mike started a ski shop before he was even in high school and it quickly flourished.  Even the news at the time did a story on him.  Eventually Michael’s hustle lead to him to create an e-commerce businesses and other lucrative situations.  Now he’s worth a cool $3 billion dollars.

#Throwback to when I was on @cnbc 20 years ago. I’ll be co-hosting Squawk Box tomorrow from 7-9am talking NFL and NBA. Hopefully I’ve gotten ALOT better in two decades! PS: that may be the only shot in basketball I’ve ever made!!! 😂

#Throwback to when I was on @cnbc 20 years ago. I’ll be co-hosting Squawk Box tomorrow from 7-9am talking NFL and NBA. Hopefully I’ve gotten ALOT better in two decades! PS: that may be the only shot in basketball I’ve ever made!!! 😂

We’re not exactly sure how or when the bromance started but let’s just say if this were the Myspace days, they would be each other’s #1 in their respective Top 8s.  Ever since Meek touchdown from jail the two have been running around the country together.  Meek Mill always had a crew but now his circle looks a little different now with a billionaire white guy at his side.  Mike has been advising Meek on how to move out here with his business endeavors as well as his activism.  Mike is definitely the plug.  Shit, we’re pretty sure Mike even facilitated the Meek and Drake’s reconciliation.  It’s like Meek is making all the right moves and has done a great job of staying out of trouble.  There’s no denying Michael Rubin’s influence on the new and improved Meek.  Before we just hoped Meek kept the momentum going in the rap game.  Now we can picture Meek reaching Diddy levels in all aspects of life.

I know I was wrong when I told you you would be out of prison and have your freedom by thanksgiving, then by Christmas, then Super Bowl etc. — but on this 4th of July I’m thrilled that you’re able to celebrate with your family. You taught me that there really are two America’s when I always believed there was only one – looking forward to working together with you to change that for the millions of people that need our help!!

This vest has two very different purposes!! For @meekmill – a fashion statement and its bulletproof lol. For me – a weight loss device! 💦🐷🐽 #MadeInAmerica

Michael Rubin is Woke and Down for the Cause

Ever since being released from prison, Meek Mill has been going hard for Criminal Justice Reform.  He wants to fix a system that railroads underprivileged folks that eventually caught up in the cycle.  Michael Rubin quickly become sympathetic to the cause and started working his contacts.  First it was the NBC interview with Lester Holt then it became a series of power meetings with some of the biggest names in politics, entertainment and sports.  Most recently Meek and Michael held a private meeting with Governor Wolf along with some heavy hitters that included Steve Stoute, Kevin Hart, Robert Kraft, Freeway, Joel Embiid amongst others. These two have been making serious waves in their campaign that seems to be having a snowball effect as more and more folks jump onboard.

Had an awesome time last night discussing the future of Criminal Justice Reform with  @governortomwolf , @meekmill, @joelembiid, @kevinhart4real, @phillyfreeway, @enikohart , Robert Kraft and many others! #criminaljusticereform

If you’re an entrepreneur or just dream about living the lavish life, Michael Rubin finds time to sprinkle a little billionaire lifestyle posts.   He does it more in a tasteful way rather than a bragger like Floyd Mayweather.  As a family man, Michael’s flexes in the form of jet setting with his family.  Often times they’ll hop on their private jet and his daughter and friends would have no idea where they’re going.  Only until they land do they find out the final destination. That’s pretty ballin’.  While we think trips to the shore or even Florida are nice weekend getaways, you can catch Michael jet setting to Hawaii, Europe or the Caribbean.  So if you need motivation to grind harder,  Michael Rubin’s Instagram makes the perfect vision board.

Bye bye Hawaii – off to the next stop!! Who knows where we are going next?? Cold or warm? 5 hour flight! #surprisetrip2018

Some beautiful place I never heard of in Italy!

Get The First Look at Tom Hanks Playing Mister Rodgers!
20 Facts About Elon Musk That You Didn’t Know!