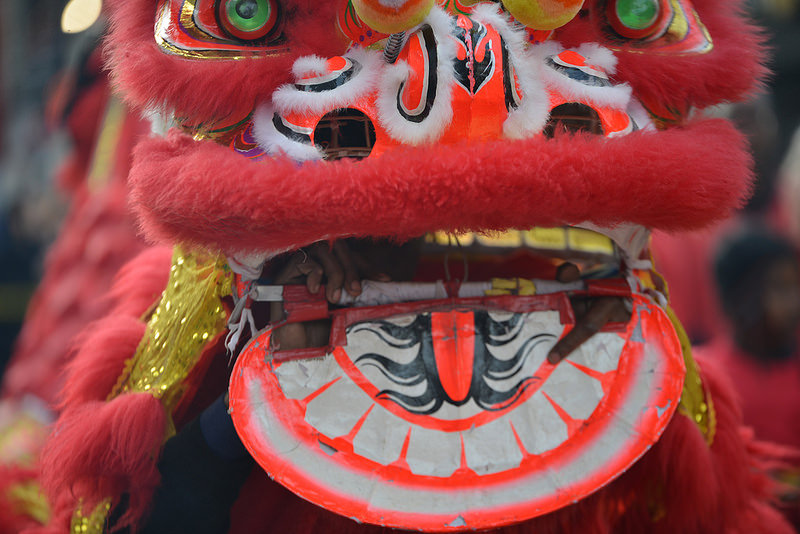 This weekend Chinatown will be the place to be as folks look to ring in the Chinese New Year.  Now if you are just getting used to the fact that we’re in a new year, then you may not be up for another celebration.  However, before you write off the Chinese New Year just know that it’s actually a better holiday than the traditional New Year.  Okay, it may not be celebrated world wide or have a drunk Mariah Carrey performing but it’s special in its own way.  So for those not up on the Chinese New Year, here are 6 reasons why it’s better than traditional New Year’s. 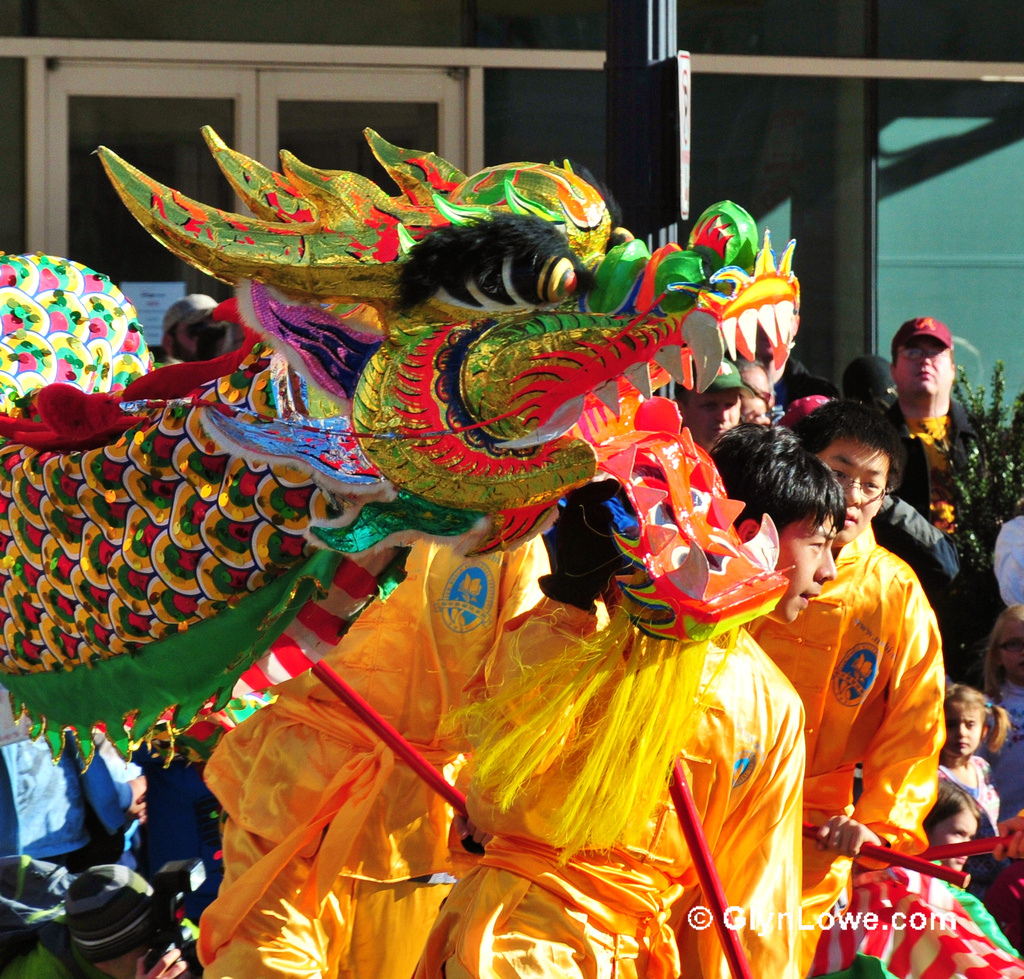 Let’s face it the Asian culture has so many dope elements and traditions.  The widely known lion dance is something you see in the movies and T.V but to actually witness it in person is such a cool experience.  Every Chinese New Year, The Philadelphia Suns conduct their lion dance all throughout Chinatown.  Often stopping inside bars and businesses as a sign of good luck, the lion dance makes for a dope festive vibe and not to mention stellar IG pics. This year the Philadelphia Suns will be performing the dragon dance Friday January 27th at 10th & race at 11:30 pm.

You’ll Save a Boat Load of Cash 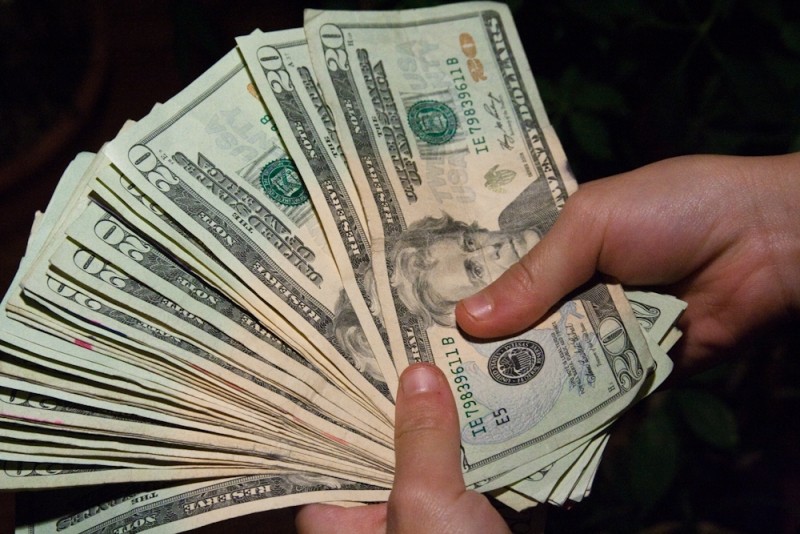 Think about it.  Regular New Year’s every club in the city is charging  $100+ just to get in the door.  Yea you get an open bar but is the goal really to get obliterated?  Celebrate on Chinese New Year’s and you’ll actually run into drink and food specials, as many local bars are enticing partygoers to come in.  So in short you don’t have to break the bank or finance a night out to have a great time.  The Chinese New Year is super pocket friendly. 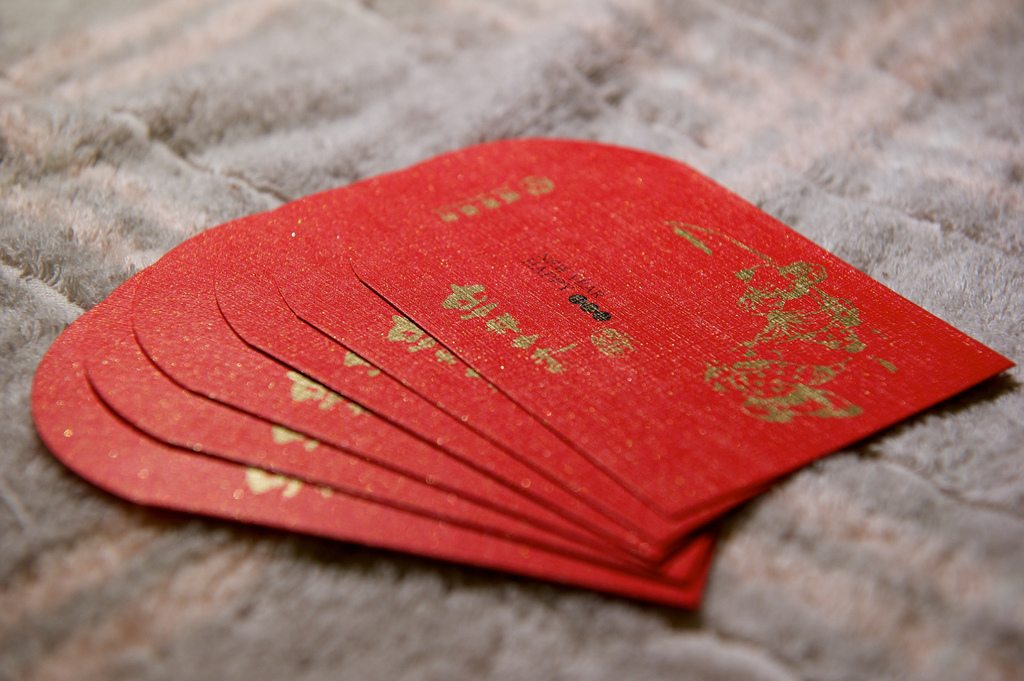 If you’re not Asian and have no clue what I mean by red envelopes then I suggest you make friends with some older Asian folks ASAP.  Every Chinese New Year Asian celebrators hand each other red envelopes.  Traditionally the elders hand them out as a symbol of good luck and to ward off evil spirits.  Inside you’ll find crisp new bills.  The amount varies but at the end of the day it’s not about the money it’s the thoughtful gesture that counts.   Who knows, you may end up with a pocket full of envelopes at the end of the night. Good luck trying to finesse money from someone on regular New Year’s.

The Food is Amazing 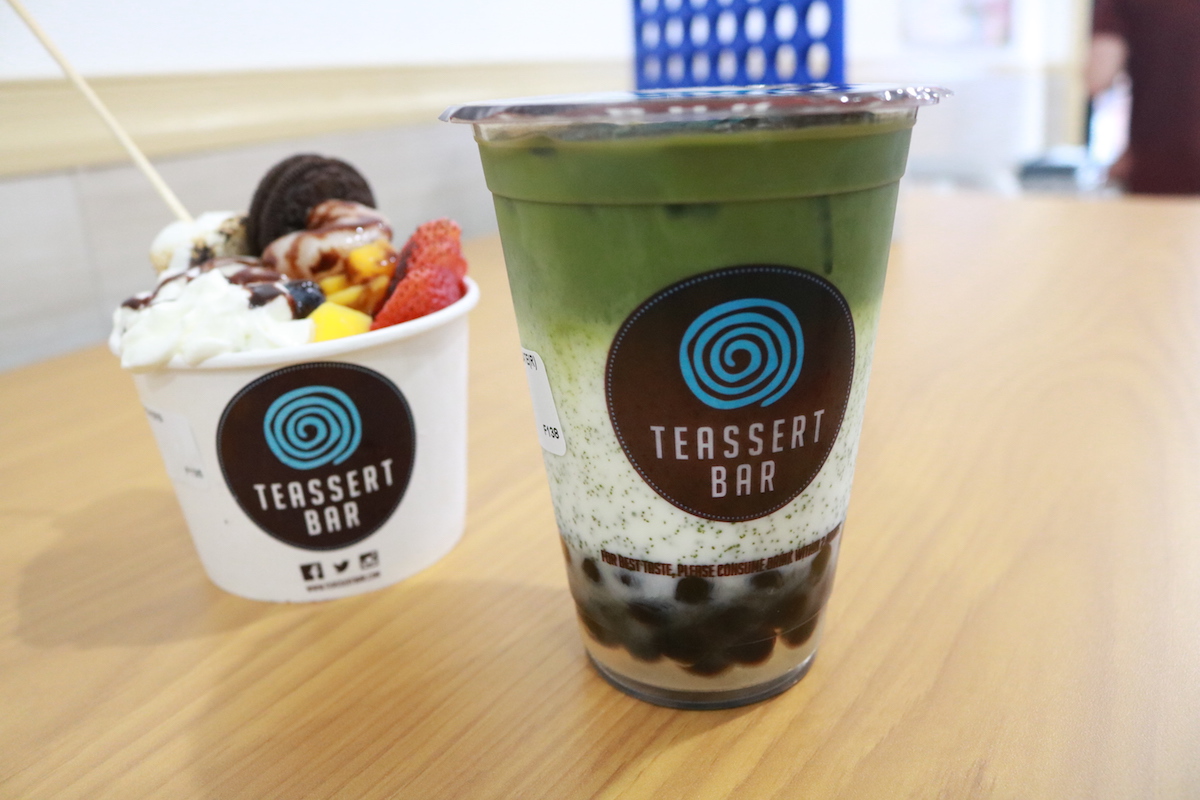 Philly’s Chinatown has been exploding with new restaurants in the last year or so.  Spots such as Canton 11, Bubblefish, Halal Guys and of course savory Thai ice cream spots Teassert and I-CE-NY.  So if you haven’t had a chance to check these spots out, well now is a better time than any.  Celebrations and events are happening all weekend so you have no reason to indulge in Chinatown’s hottest new spots.  At a regular New Year celebration you might get lucky and score a nice cheese and cracker spread to go along with the 8 hour open bar that set you back a car note.

A Chance to Explore Chinatown 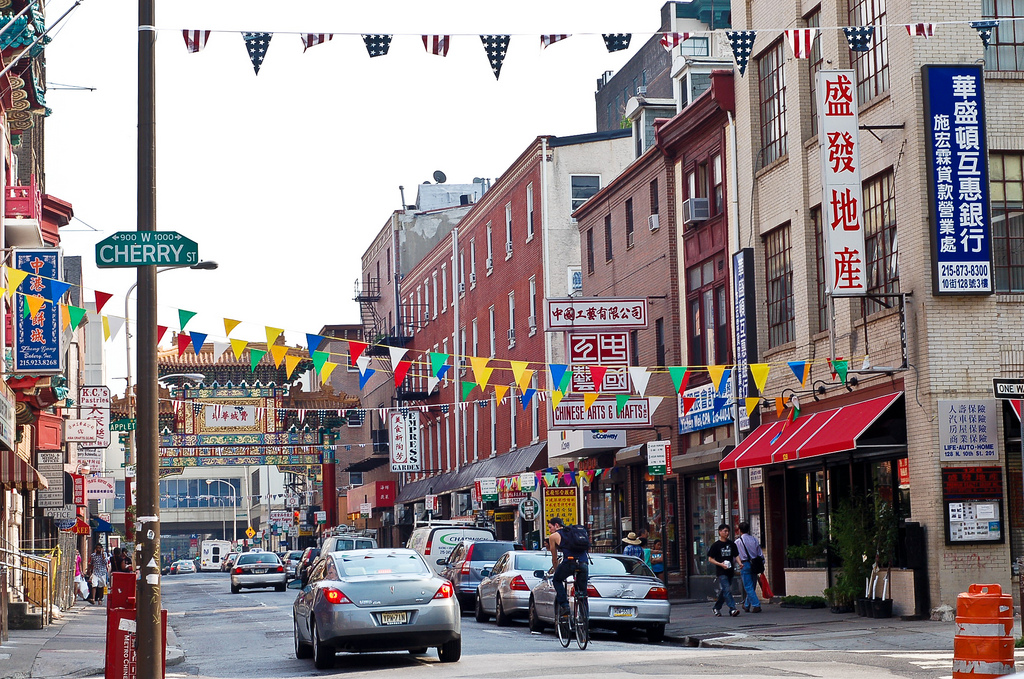 Chinatown Philly is an underrated part of town.  Once you get past the roasted ducks on the windows, you’ll be able to see the abundance of cool spots you’ve slept on all year.  Chinese New Year in Philly gives you an opportunity to explore a part of the city that many drive through but rarely walk around in.  There are tons of shops, markets and cool bars to discover.  Yea, Fishtown and E. Passyunk have some outstanding restaurants but no section of the city has as much culture and soul as Chinatown.  Go see for yourself. 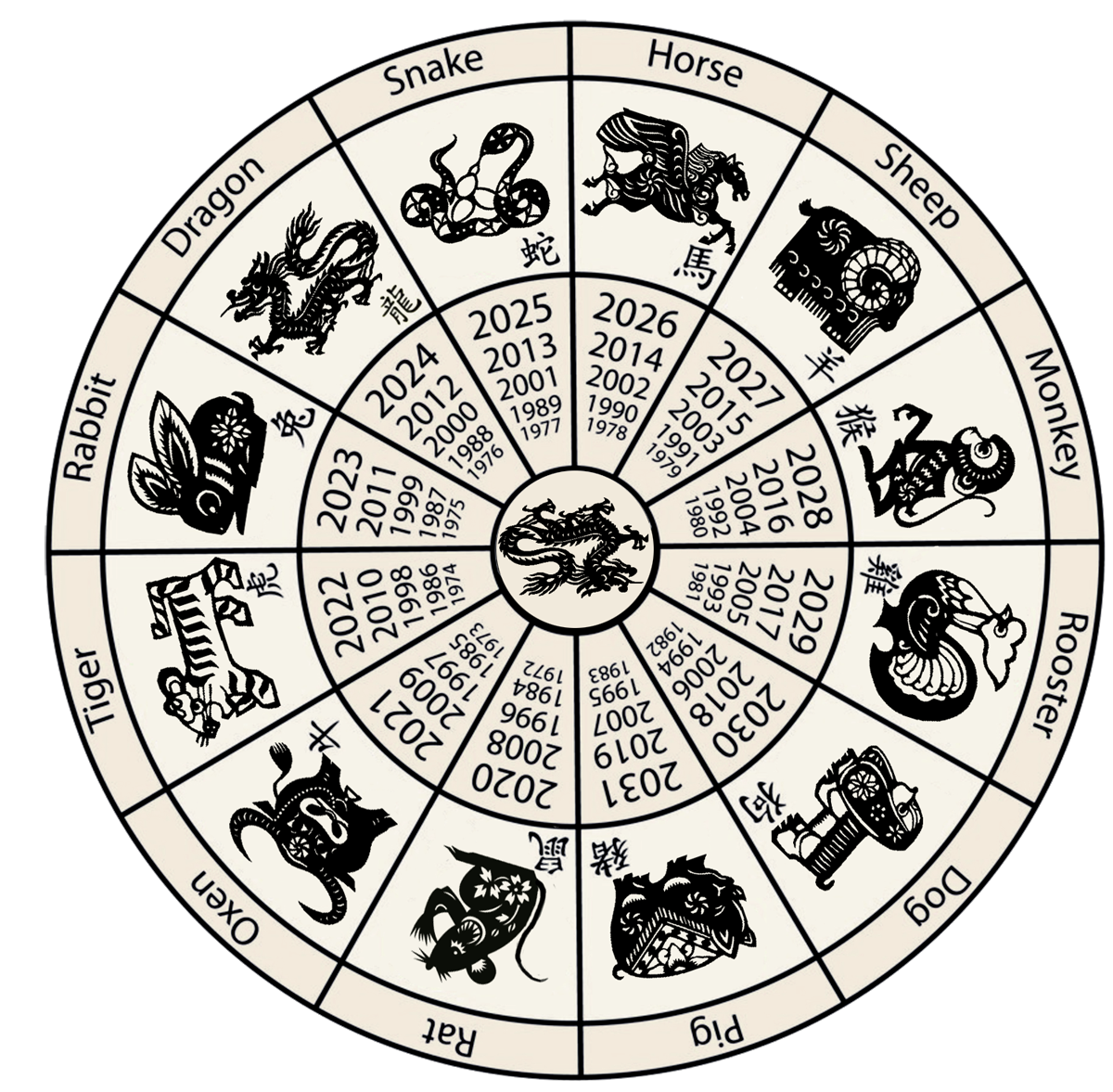 For the traditional New Year’s folks are thinking about 3 things.  Where to party, what to wear and what resolutions will be broken.  The Chinese New Year has meaning and significance.  It’s just not a time where the date changes. Each year is symbolized with an animal from the Chinese zodiac. 2017 happens to be the year of the Fire Rooster. The last time the Fire Rooster was celebrated was in 1957.  Folks born in 1957 and babies born this year are said to be trustworthy, with a strong sense of timekeeping and responsibility at work. 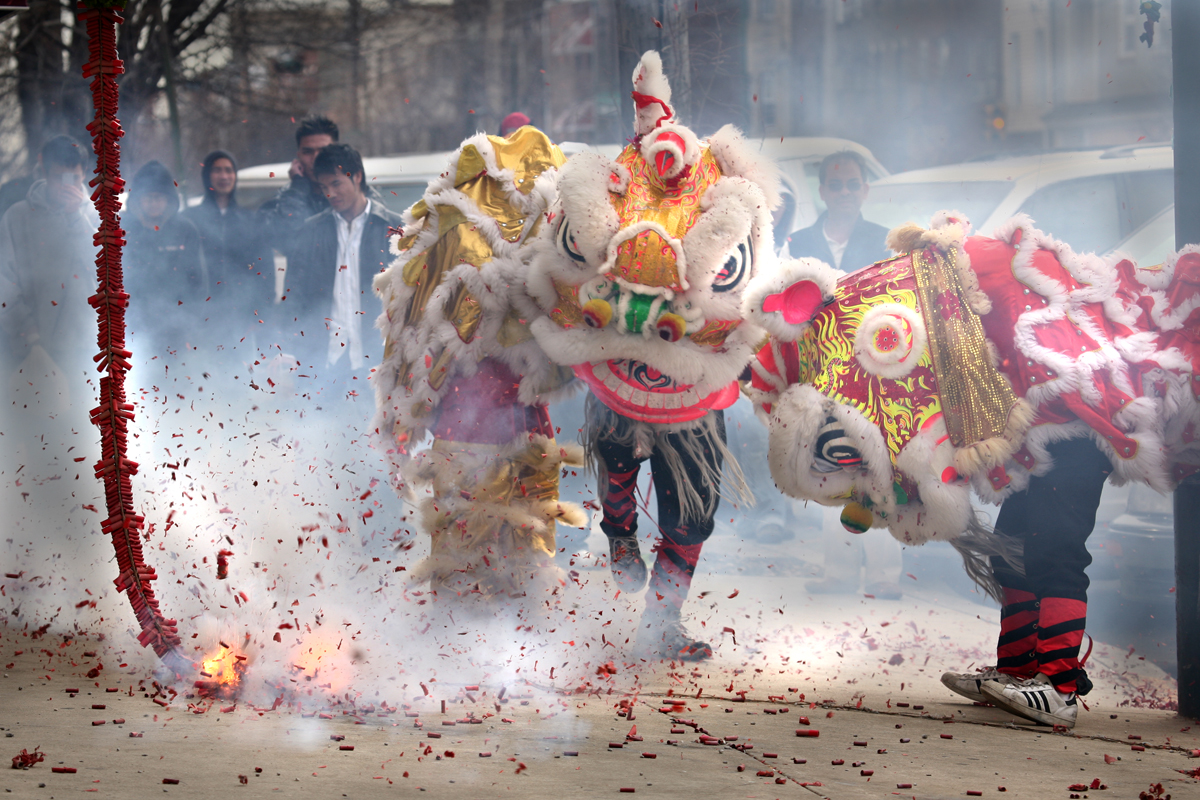 Okay so the traditional New Year’s goes all out with an over-the-top fireworks show.  However, don’t expect any of that during the Philly Chinese New Year.  Instead, folks celebrate by lighting a string of fire crackers in front of businesses as a dragon dance is performed to bring them luck.  It’s loud, it’s bright and it’s pretty damn dope.  It’s like 4th of July on your block but in Chinatown.  It’s a cool tradition to witness and just one more reason why the Chinese New Year is just that much better.

Check Out the Full List of Philly’s Chinese New Year’s Celebration Below: 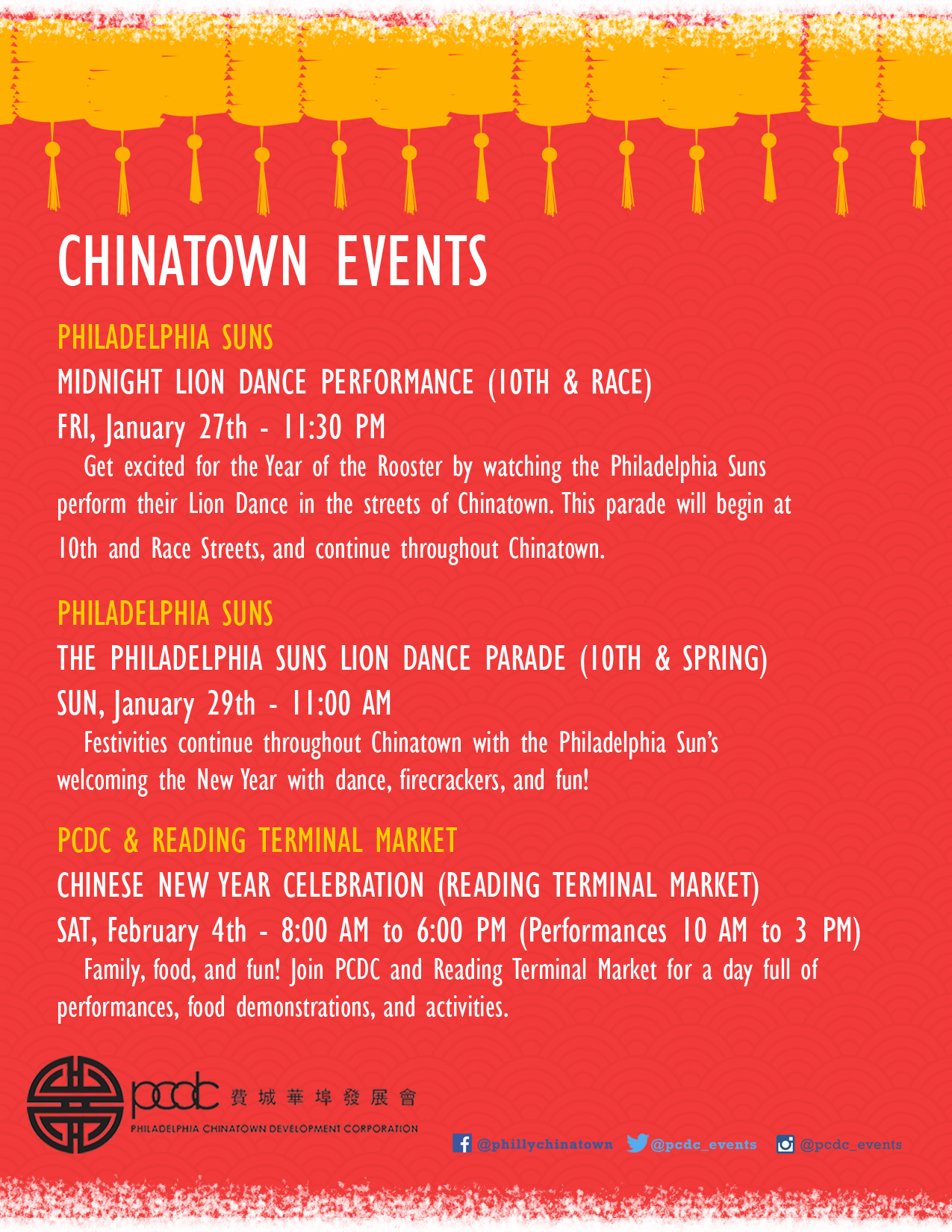