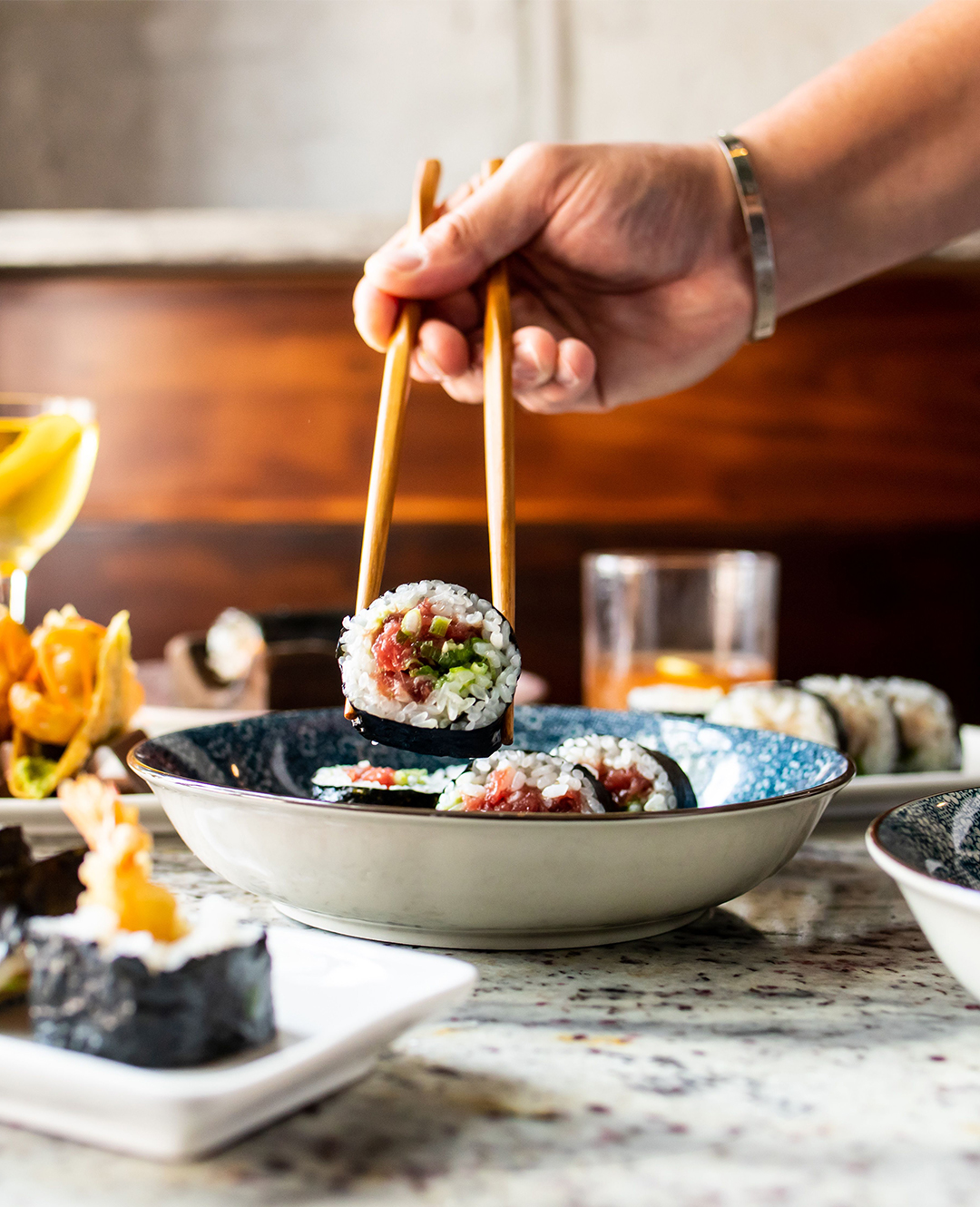 Stina BYO, Philadelphia’s restaurant with a social mission, announces a brand new monthly Guest Chef Series and Charity Dinner that will benefit local non-profit organizations. After three sold-out charity dinners in a row in the fall, Stina is excited to continue their Guest Chef Charity Dinner Series in 2022 with the Philly’s Sushi Whisperer Kevin Yanaga. On Tuesday, March 22, 2022 from 4:00pm to 10:00pm, Stina is honored to open its kitchen to special guest Yanaga, of Izakaya by Yanaga and soon-to-open Omakase by Yanaga, who will work with Stina’s owner Chef Bobby Saritsoglou on a delicious multi course, prix fixe menu. Twenty percent of the evening’s sales are going to this month’s beneficiary, Asian Arts Initiative.

“I am thrilled to announce our Guest Chef Charity Dinner Series to raise funds every month for causes in our community is back and will continue in the new year” said Saritsoglou. “This is an exciting chance every month to mix things up in the kitchen and collaborate with Chefs I have worked with and admired over the years, as well as an opportunity to help support up-and-coming Chefs and those with new projects in the works. The first time I met Kevin was in center city in the alley where all the chefs seem to congregate before service, we instantly found similarities in our lives and careers. Kevin has a real integrity in his cooking that is authentic and forward thinking, and his passion is exciting.”

Chef Kevin Yanaga shared, “Bobby and I go back to when I was working at Double Knot and he was at Opa. We would always see each other in the neighborhood, and we have mutual friends in common – so our paths would cross often. When he invited me to take part in this event it was a given that I would want to participate. I have tons of respect for Bobby and his talent, but also admire all they are doing at Stina to give back. Also, I always wanted to bring my cuisine to South Philly as we have so many fans and friends down there. This is a win-win and I can’t wait to meet everyone in Bobby’s neighborhood.”

For the collaboration menu, March’s menu will include the following dishes:

Dinner reservations for this special menu are $85 dollars, plus optional sake flight from Sango Kura, Pennsylavnia’s only sake brewery. The sake pairing is $15 per person. Twenty percent of the evening’s sales are going to this month’s beneficiary, Asian Arts Initiative.

For March and the 2022 kick-off, Stina welcomes celebrated Chef Kevin Yanaga and Philly’s Sushi Whisperer from Izakaya by Yanaga. Chef is currently busy preparing to open Omakase by Yanaga with Glu Hospitality in May/June of this coming year.

Born in California but raised in Japan, Kevin Yanaga started professional cooking in Kawasaki, Kenajawa Prefecture. He began his career working in Izakayas, or casual pubs – a love of his from his childhood. Long fascinated by the artform, Yanaga logged his first hours as a sushi chef in the states, as the executive chef of Naked Fish in Salt Lake City, Utah. As he became immersed in the sushi scene, he quickly found a love for connecting with guests over food.

In 2009, Yanaga relocated to Philadelphia to grow his raw-fish repertoire, starting at Morimoto before becoming the head sushi chef at Zama. During these years, Chef developed his own style in the context of sushi – marrying local ingredients and western culinary techniques with traditional Japanese touches via Omakase. Next up for Yanaga was a run behind the eight-seat sushi bar at Izakaya, a Japanese restaurant inside the Borgata Hotel & Casino in Atlantic City, NJ. His rapid success led him back to Philadelphia as the executive chef of Double Knot, where he earned numerous accolades for his innovative Omakase stylings, including a rave three – bell review and a “Rising Chef of the Year” nod from the Philadelphia Inquirer. Yanaga had a run as the executive sushi chef at POD in west Philadelphia and back at Zama before ultimately making the transition to launch Izakaya by Yanaga in Fishtown with Glu Hospitality. A place to call home, where Chef Yanaga is beyond excited to share his love of sushi with the Philadelphia community, and continue to cement his legacy as a must-see Chef in Philadelphia.

For March’s charity, Stina and Chefs will raise funds for Asian Arts Initiative – who creates community through the power of art. Connecting cultural expression and social change, Asian Arts Initiative uses art as a vehicle to explore the diverse experiences of all communities which include Asian Americans. Located in Philadelphia’s Chinatown North, Asian Arts Initiative is a multidisciplinary arts center offering exhibitions, performances, artist residencies, youth workshops, and a community gathering space. Here, all of us can view and create art that reflects our lives, and think critically, creatively about the future we want to build for our communities. For more info about Asian Arts Initiative, visit www.asianartsinitiative.org/