The All-New Latin Restaurant "Bodega Bar" is Opening in Center City! Here's What You Need to Know! - Wooder Ice 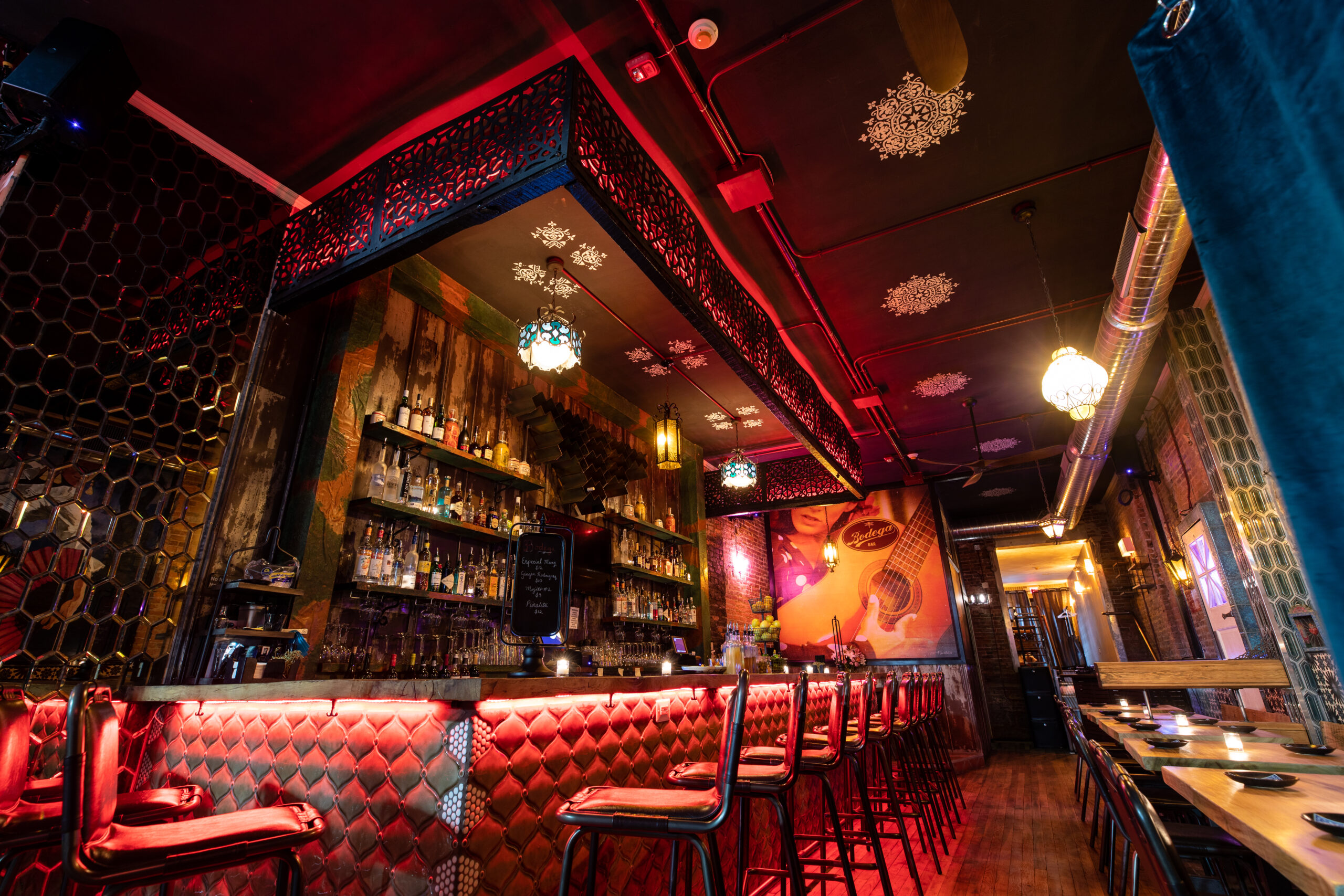 The All-New Latin Restaurant “Bodega Bar” is Opening in Center City! Here’s What You Need to Know!

The All-New Latin Restaurant “Bodega Bar” is Opening in Center City! Here’s What You Need to Know!

Restaurant veterans Alex and Stavros Vasiliadis, along George Karagiannis, announce the grand opening of Bodega Bar and Kitchen at 1223 Walnut Street this Friday at 11:00am. The former owners of Bump, Pandora’s Kitchen and Monkey Bar present a first-of-its-kind stylish, lush, intricate and colorful new restaurant, bar and live entertainment venue that is ready to dazzle with a tantalizing blend of Latin-inspired cuisine, unique hand-crafted cocktails, and live upbeat music. The 950 square foot space is ready for Instagram from the 20+ foot high ceilings to the ornate tile floors – with shimmering walls and interior design showcasing big and small details, original art, giant murals and original family memories. In the kitchen, Bodega is proud to introduce Executive Chef Shain Wancio who hails from the award-winning Farm Truck Philly, plus New Hope’s Centre Bridge Inn, Le Pommier, Deterra, Sidecar Bar, Kraftwork, and Supper. Highlights of Chef’s menu include Chorizo Crusted Monkfish, Pretzel Crusted Pastrami Fried Chicken with Sage and Cheddar Waffles, and Nashville Hotoctopus. At the bar, look for a robust selection of wines to pair with Chef’s cuisine, plus an extensive fruit-forward menu of cocktails. Opening hours are Monday through Friday, from 11:00am to 2:00am, and Saturday and Sunday, 9:00am to 2:00am. Look for lunch and dinner menus to start off, with brunch and weekend breakfast to be added in the coming weeks. Happy Hour will run Monday through Friday from 5:00pm to 7:00pm. Live and recorded music will light up the space Wednesday to Saturday, from 10:00pm to 2:00am.

While Bodega opens this week, look for phase two to debut later in the spring – which will nearly double seating in a giant, outdoor oasis, patio and garden behind the restaurant that is already under construction. 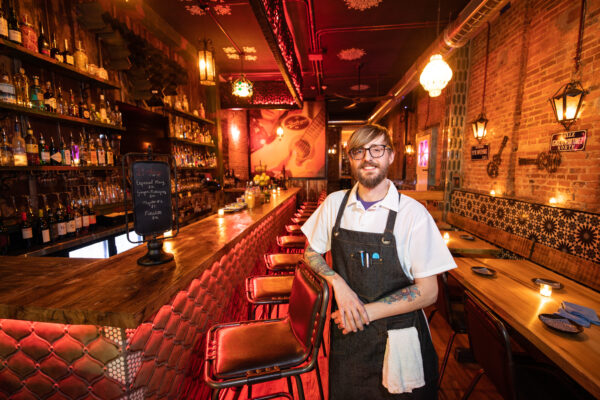 Bodega Bar and Kitchen is proud to introduce Executive Chef Shain Wancio. This Bucks County native has deep ties to the Philly food scene. He has been serving up Philadelphia-area eats for over a decade.

As a kid, he wanted to cook so badly that he used to argue with the girls in his preschool when they wouldn’t let him play “chef” in the toy kitchen. As he grew he developed a love of simple cooking done right in the home of his parents, Sandra and Daniel Wancio.

Shain got his start cooking professionally with chef Scott Edwards at New Hope’s Centre Bridge Inn, preparing Modern American cuisine for the river town set. An alumni of Le Pommier, Deterra, Sidecar Bar/Kraftwork, and Supper, he took on the role of head chef when he joined Farm Truck, the much-lauded food truck familiar to area wedding guests and Mann Center concert-goers. Under his leadership, Farm Truck participated in WHYY’s Best of Chefs, won Best Overall Dish at the 2018 Manayunk strEAT Festival, and his Al Pastor Banh Mi was listed on Zagat’s “Sandwiches We Are Eating This Summer” in 2017. 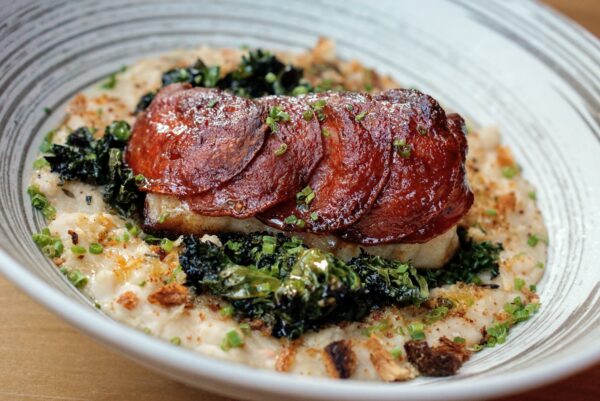 Soothe yourself and allow yourself to be acquiesced for an evening of discovery and intrigue by our attendant staff and sumptuous menu offerings. Servers will spoil you as they attend to your parched mouth and famished stomach. Chef’s opening all-scratch menu features an eclectic array of contemporary cuisine with Latin inspired fare, blended together with Middle Eastern and Asian influences. Look for daily and weekly specials.

The menu is broken down into garden, snacks, entrees, sandwiches, desserts and a luxury treat yourself section. Highlights include: 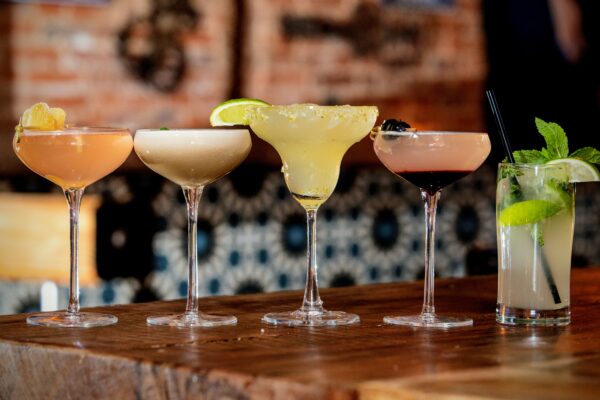 The Bodega Bar in Center City presents an inspired imagining of both classic and unique spirits and cocktails, plus a robust wine program to compliment the food program with strong notes of spice and fruit to balance the kitchen.

Bodega’s wine list will feature nearly 20 wines by the glass, plus 17 wines to start by the bottle. Look for the wine list to have an emphasis on organics. Bodega aims to offer different types of wines that aren’t offered anywhere else in the city from far reaches of the world; Chile, Spain, Portugal, Argentina, Belgium and beyond. The wine program was designed by Alex Vasiliadis and General Manager Patrice Caron. Caron said, “CHeck back regularly as we’ll be constantly searching for organic wines given that they meet our standards of excellence and sustainability.”

Bodega’s beer program will feature a tight list of cans and bottles of Southern hemisphere inspired lagers and ales, plus cider and seltzer.

The crown jewel of Bodega’s bar program will be the extensive cocktail menu – with a fruit-forward and well balanced selection that includes cordials and spirits prepared with a balance of food in mind and an emphasis about taste and garnish.

Alex shared the inspiration for three cocktails, and said, “The Diplomat came from a romantic affair thereby inspiring an affinity for Gin. For Ginger Rodriguez we wanted to combine the smokiness of Mezcal and the voluptuousness of Ginger Rogers, and Gypsy’s Ramblas was inspired by a trip to the Ramblas in Spain.” 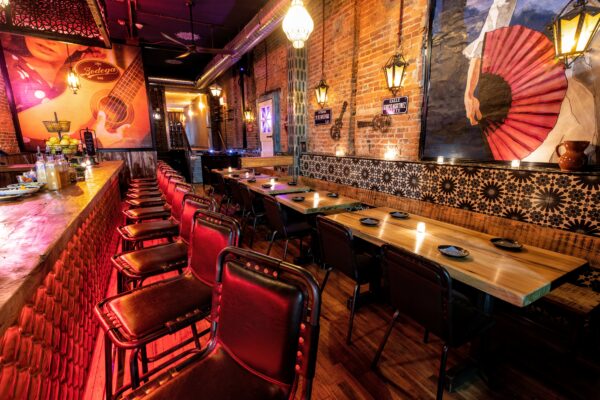 Bodega is a hospitality concept five years in the making from the signing of the lease to the 1.5 years of construction. The transition from a nail salon to a restaurant is the difference of night and day for the prime Midtown Village space. The interior vibe and design aims to pay tribute to  Post revolutionary Cuba. Materials used include reclaimed PA Sycamore on the bar and tables, plus reconstructed Iron, Saltillo and Andalusian tile work, and smoky hexagonal glass. All materials were either sourced locally or came from Southern Hemisphere countries where they would otherwise have been neglected. Other unique materials include artwork taken throughout the owner’s travels; bricks and tile from Mexico and Spain; and back bar tins and copper panel from uninhabited estate sales.

Bodega is a local cantina, that welcomes all those seeking refuge, a neighborhood restaurant made by locals for locals with the intention to bring people together to exchange ideas over tapas, discuss business proposals over dinner and sip cocktails with newly made friends. A dreamy fantasy at 3am where emotions run high and the details are left to be understood the day after. Oozing with hues of emerald green and amber, shadows pierce through the wrought iron lighting like a tattoo on skin. Peppered with cozy banquette sofas, the beautifully lit chandleries subtly shift and ever change with each passing moment, transporting you to another time and place.

Bodega juxtaposes postmodern architecture with mid century design, pre revolution Cuba and remnants of the past delight and haunt succinctly. The Linear A design group has created a sanctuary of romance and splendor without ostentation.

Upon entering Bodega, guests will be greeted by a an expansive 19 foot bar made from a reclaimed Pennsylvania Sycamore tree. Around the bar, look for 13 stools, and dining room seating for up to 50 people on high-tops and low-tops, with chairs and banquet style seating options. Outside in nice weather, look for the addition of ten seats and five tables for sidewalk views on Walnut Street. For now, Bodega will launch with a total of 60 seats inside and 10 seats on Walnut Street (nice weather pending). Later in spring and before summer, look for phase two for Bodega – an expansive and ornate outdoor oasis, garden and patio to debut behind the restaurant with seating for dozens more – plus an outdoor bar.

Inside the dining room, hallways and bathrooms, look for bright, vibrant and original art and murals.  The murals are images from world travel experiences of the owners in the southern hemisphere blown up to epic proportions. Inside the bathrooms in particular, make sure to look close for a familiar face or two. Alex said, “The business we are involved in is all about being personal. Friends and family are integral. Photos we took with family and friends taken in Mexico and Dominican Republic respectively are blown up and come to life inside.”

On Walnut Street, the brothers have plans for plants and outdoor seating, but otherwise they wanted a mellow, simple approach as you drove by the restaurant. “We wanted to dazzle you the second you came in the doors. You can see the life and energy from the outside through the giant full-length windows that will open to Walnut Street. We wanted you to get a taste of what is inside, but have you enter another world once you set food inside. Alex added, “We aim to create an exciting outdoor space, where a Hacienda meets Japanese Garden with ample foliage, a second bar space and a few surprises with seating for up to 50 more – doubling our dining room seating.

When asked about the mood Bodega is trying to create, Alex said, “A dreamy fantasy at 3am where emotions run high and the details are left to be understood the day after. Oozing with hues of emerald green and amber, shadows pierce through the wrought iron lighting like a tattoo on skin. Peppered with cozy banquette sofas, the beautifully lit chandleries subtly shift and ever change with each passing moment, transporting you to another time and place.”

Interior design for Bodega was done by Linear A Design Group. 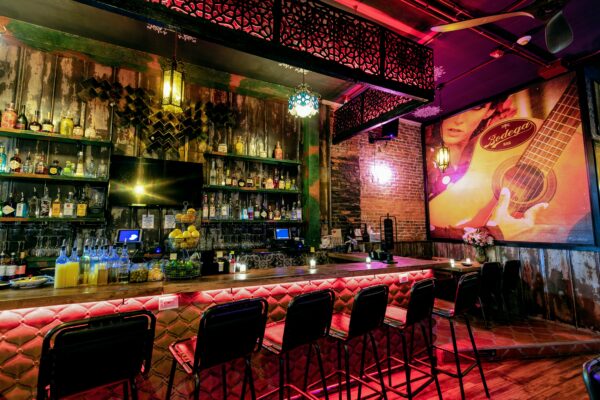 Escape from the troubles of your day and enter a new world when you step foot inside Bodega. Your new local cantina will come to life after 10:00pm on Wednesdays, Thursdays, Fridays and Saturdays, with live and recorded world house music and Latin inspired beats. Look for a full schedule of entertainment coming soon.