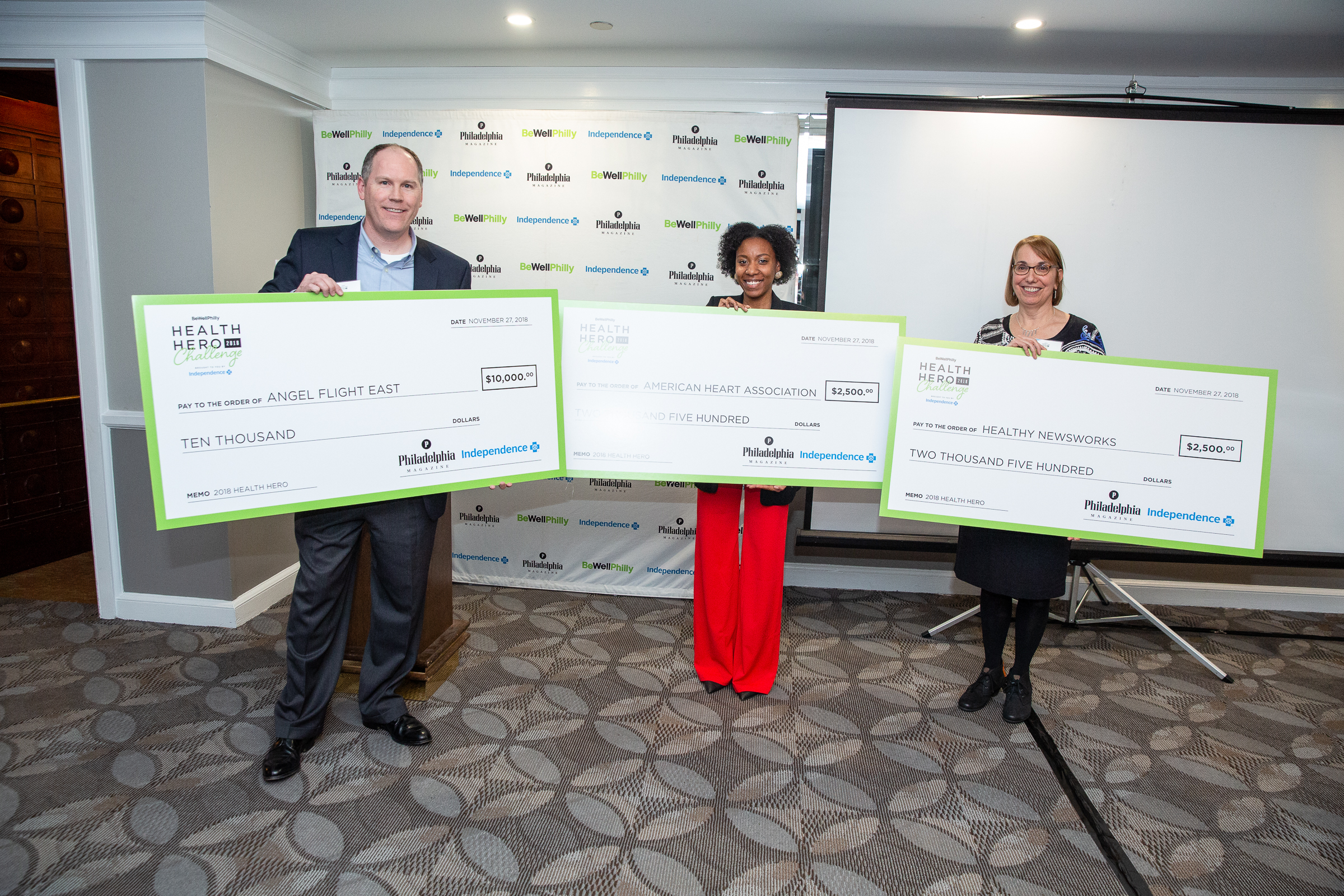 After much anticipation, the results are in! Tuesday, November 27, Philadelphia magazine hosted the Be Well Philly Health Hero Reception at the Pyramid Club, where the 2018 Health Hero and Very Influential Philadelphians were revealed. This year’s Health Hero is Todd Irwin, who received a $10,000 donation to his chosen charity, Angel Flight East; the VIP is NBC10 Philadelphia’sTracy Davidson, who received a $2,500 donation to her chosen charity, the Philadelphia Freedom Valley YMCA. The challenge, presented by Independence Blue Cross, was created seven years ago to celebrate and recognize local pioneers in the health and wellness industry for their contribution to the Philadelphia area.

Todd Irwin is the president of the Board of Directors and a volunteer pilot for Angel Flight East (AFE). Angel Flight East is a nonprofit organization that provides free air transportation for people who need to travel long distances for medical treatment. Serving the Northeastern region of the United Stages, AFE’s volunteer pilots use their own aircraft to fly patients to their destinations, and pay for all expenses for each mission they fly. As the winner of the Health Hero challenge, Todd will proudly be giving Angel Flight East the $10,000 prize.

The competition was intense this year with inspiring finalists. The two runner-ups will each receive $2,500 towards the charity of their choosing. Alanna Gardner will be donating her winnings to the American Heart Association, the United States’ oldest and largest voluntary organization dedicated to fighting heart disease and stroke. Marian Uhlman is giving her donation to Healthy NewsWorks, an organization that empowers elementary and middle school students to become researchers and writers who support the spread of health information and literacy through publishing and digital media.

Once again, Be Well Philly selected three familiar faces to honor as Very Influential Philadelphians, from which the public also chose a winner. This year’s Health Hero VIP winner is Tracy Davidson. Tracy is a morning anchor on NBC10 Philadelphia, and when she’s not giving us the news, she’s urging us to make health our top priority. Tracy has decided to donate her $2,500 prize to the Philadelphia Freedom Valley YMCA. The Y is one of the nation’s leading nonprofits strengthening communities through youth development, healthy living, and social responsibility. Throughout the Delaware Valley, the Philadelphia Freedom Valley YMCA serves more than 160,000 members and 240,000 individuals a year, regardless of age, income, or background.

The two VIP runners-up are also making impressive strides to make the Philadelphia area happier and healthier. Christian Crosby is the in-arena host and Content & Integrated Marketing Manager for the Philadelphia 76ers, and the founder and CEO of Live Life Nice, a cause-driven digital media and apparel company dedicated to inspiring, motivating, and empowering people to “be nice and do nice.” Wendell Holland is a furniture designer and builder at his company Beve Unlimited, a local custom furniture company specializing in reclaimed wood, as well as the winner of Survivor: Ghost Island. The Ardmore native is motivated by giving back to his community and helping Philadelphia be a city that makes it easier for all its residents to have healthier lifestyles.

Philadelphia magazine and Independence Blue Cross thank everyone who voted and supported these inspiring Philadelphians who work hard all year round to improve our communities. We look forward to next year’s competition, and the many more health advocates it will shine a light on!

Did You Know That There’s a BYOB Gingerbread House Workshop?!
Merry Grinchmas! You Can Now Take Your Christmas Photos With The Grinch!