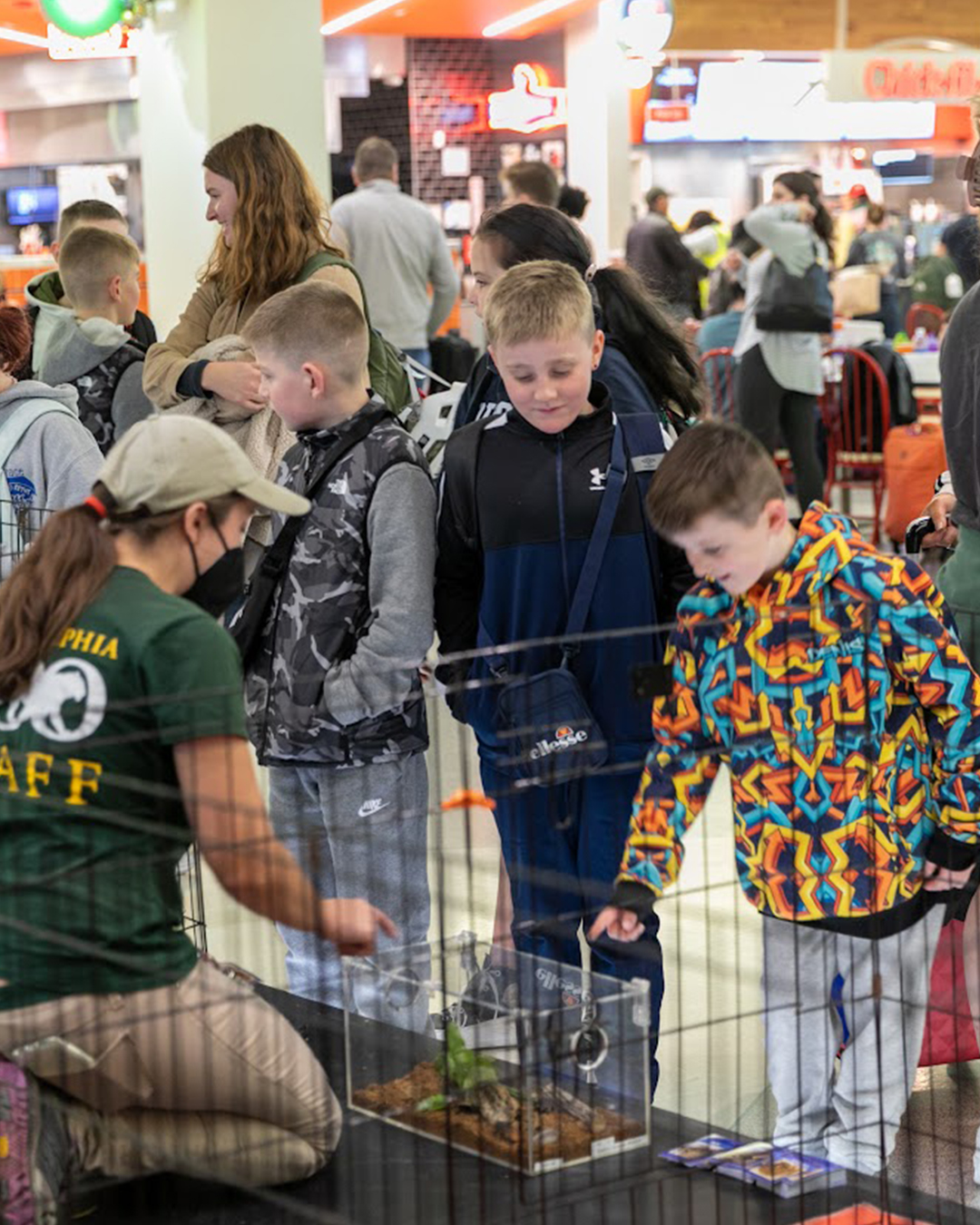 Philadelphia Zoo’s education team and animal ambassadors are connecting travelers to species from around the globe. The partnership, which started in 2019 and then was paused by the COVID-19 pandemic, is now back on a regular schedule to delight travelers and create joyful discovery of animals and habitats.

Each month, the Philadelphia Zoo team will bring in ambassador animals to teach (and surprise) travelers as they wait for their flight, grab something to eat, or simply travel from security to their gate.

Travellers might get to meet a nine-banded armadillo who loves to eat mealworms; a rainbow boa whose skin refracts light and creates a rainbow-colored effect; blue and gold macaws who love to snack on sunflower seeds; and red-footed tortoises whose conservation status is vulnerable due to overhunting. Bili the prehensile-tailed skink is just one of the many animals you might encounter at PHL International through a partnership with Philadelphia Zoo.

“The airport events are a reflection of the city and by having Philadelphia Zoo, one of the city’s greatest attractions, bring in live animals is an amazing and memorable experience for our passengers,” said Philadelphia International Airport Director of Guest Experience Leah Douglas. “It’s always fun seeing people’s expressions because it’s so unexpected and delightful.”

“The biggest takeaway from this experience is that animals are a universal good,” said Philadelphia Zoo Director of Mission Integration Dani Hogan. “It doesn’t matter where you’re from or what you do – seeing a live animal just enjoying themselves in a surprising way is such a genuinely good thing for people to experience.”

The education team said they’ve had dozens of amazing encounters with travelers who thank them for being there, like a family traveling from the United Kingdom who said learning about the animals made their long layover worth it, to Philly natives who say they haven’t been to the Zoo in years and feel it is time for them to go back.

The coming schedule for winter and spring is as follows:

Animals travelers may experience at the airport may include:

Camilla (24 years old)- 3 banded Armadillo
Range: Central and Eastern Bolivia, Brazil, Paraguay and Argentina
Habitat: grassy, marshy areas of forestland
Conservation status: Near threatened
Diet: Mostly ground dwelling insects, perhaps fruit
Age: 15-20 years
Fun facts:
When burrowing they can stop breathing for 6 minutes by storing air in the trachea and wide bronchus. The 3-banded armadillo is the only armadillo that can completely enclose itself by rolling into a ball. Armadillo armor is made up of dermal bone covered by tough epidermal scales that are called scutes. Young are born blind, but can walk and close shell within hours of birth. Common predators include Jaguars, pumas, humans.

Rhonda (36 years old) – Radiated tortoise
Range: Island of Madagascar
Habitat: dry woodland, scrubs and thorn bushes
Conservation status: Critically endangered
Diet: fresh and dried grasses fruits, cacti
Age: 40-50 year average, up to 100
Fun facts:
The carapace is brilliantly marked with yellow lines radiating from the center of each scute, giving it its name. Naturally occur in an area of only 19,680 square miles. The shell is supplied with blood vessels and nerves so like other tortoises, it can feel when being touched. Unfortunately, these tortoises are severely endangered due to loss of habitat, being poached for food, and being over exploited in the pet trade. The burning of the tortoise’s spiny forest home for charcoal production is also threatening the species.

Bili (23 years old)- Prehensile-tailed skink
Range: Solomon Islands in the South Pacific
Habitat: tropical forests
Conservation status: unknown; but endangered and has SSP in AZA zoos
Diet: plants
Age: 15 is the average, with many living well beyond into their 30s
Fun facts:
This is the only known species of skink with a prehensile, or grasping, tail. It can account for up to half of the skink’s total size. The prehensile-tailed skink is also known by several other names, such as the monkey-tailed skink and the Solomon Island skink. Arboreal, hangs suspended from branches or hides in tree hollows during the day. Long claws have razor sharp hooks, enabling them to cling to the trees. Unlike the vast majority of other skinks, the prehensile-tailed skinks are strict vegetarians and particularly like leaves and flowers they find in the trees. Philadelphia Zoo was one of the first zoos in North America to successfully breed these animals in the 1980s