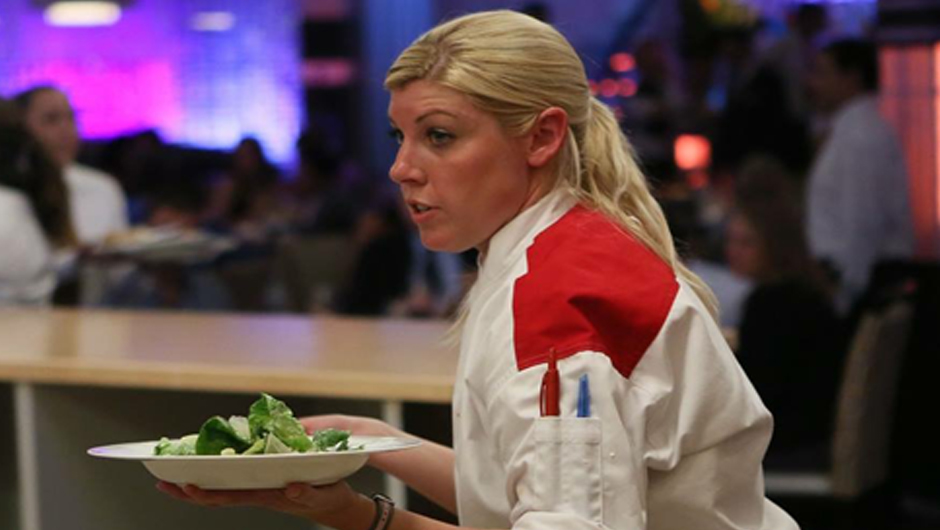 At Chickie & Pete’s tavern in northeast Philadelphia, more than 100 friends, family and fans of Chef Christine Hazel gathered on Tuesday night to watch the rising culinary star become the newest Chopped champion on the popular Food Network show. Hazel outlasted three other competitors and won the praise of a panel of critics that included Martha Stewart.

Hazel, a former cast member on the FOX series Hell’s Kitchen, had taped the Chopped episode months in advance and had to wait for the results to be revealed before celebrating her latest achievement with the crowd in attendance. The title “Chopped Champion” also came with a $10,000 prize for Hazel and the future opportunity to compete in an all-champions episode.

Along with Stewart, judges Alex Guarnaschelli and Geoffrey Zakarian gave Hazel the highest cumulative marks for her appetizer, entrée and dessert creations in a Halloween-themed episode entitled “Haunted Hijinx.”  Her dessert, a gingerbread cake with prickly pear cream, gave her the winning edge in the final round.

“I’m extremely proud to be a Chopped Champion, and so happy to share this experience at Chickie & Pete’s with such a supportive group of friends and family,” said Hazel. “To cook for Martha Stewart was a thrill – I’ve admired her for years and have always respected the way she built a brand around her cooking, which is something I would love to do.”

A native of Philadelphia, Chef Hazel received her culinary training at The Art institute of Philadelphia where she graduated with honors. While still in culinary school, Hazel competed in 11 episodes of Hell’s Kitchen under the watch of Chef Gordon Ramsay. Her experiences on the show inspired her to new levels of creativity and confidence. She describes her style as putting modern twists on classic French and American dishes.

Hazel’s work as the owner of a private catering company includes special guest appearances as the featured chef at restaurant events around the country. She is also one of the leading chefs at the Masters Tournament each year at Augusta National Golf Club in Augusta, Ga., serving as area chef for corporate sponsors AT&T, IBM, Mercedes-Benz and Rolex.

In Philadelphia, she has worked as sous chef for renowned Iron Chef Jose Garces and served as Culinary Advisor to the Chickie & Pete’s restaurant group. In addition, Hazel is the Cause Champion for the United Way of Greater Philadelphia and Southern New Jersey, helping to feed over 120,000 families in the Philadelphia area through the United 2 Feed Campaign.

20 Facts About Elon Musk That You Didn’t Know!
Amazon Raises Their Minimum Wage to $15 per Hour!