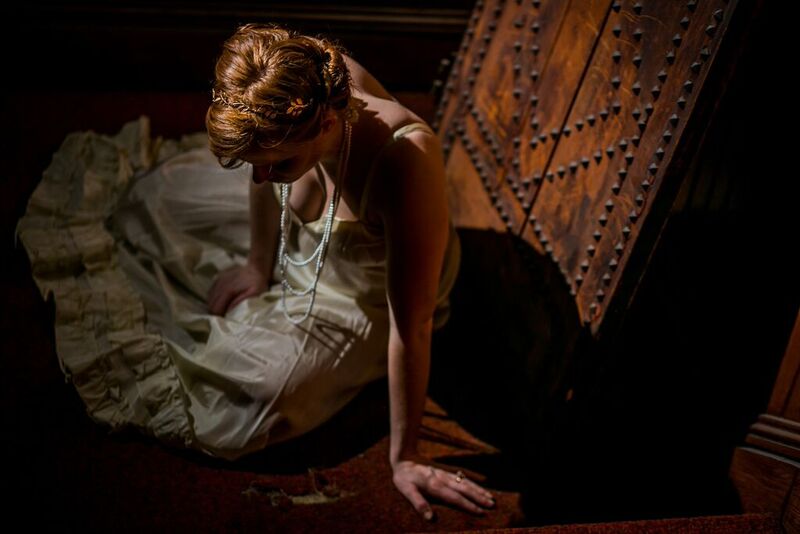 Fresh off of four Barrymore Award nominations, Philadelphia Artists’ Collective returns with The Captive by Edouard Bourdet, from September 1 through 20, 2015, during the 2015 Philadelphia FringeArts Festival. This well-mannered tragedy will tackle issues of sex, domesticity and class manners. Deeply controversial in its time, productions of this 1926 play were censored, and its producers and actors jailed. The Captive will be produced inside Society Hill’s Physick House at 321 S. 4th Street. The historic townhouse in fact will be the perfect co-conspirator as the secrets and heated private moments unfold. PAC co-founding Artistic Director Dan Hodge directs the talented cast led by well-known Rachel Brodeur and newcomer Chase Byrd.

Written by the French dramatist Edouard Bourdet and known in French as La Prisonniere, The Captive centers around Irene (played by Brodeur), the daughter of a domineering diplomat who carries a dark secret that could ruin her life. Her quiet devastation sparks a chain of events that will shake the foundations of her otherwise tidy world.

“The Captive is about people who desperately need to love and be loved, and yet seem incapable of being honest,“ said Hodge. “At first glance, the captive of the title seems to be Irene. But as the play unfolds, each character emerges as a prisoner to another. It’s pretty thrilling to experience.”

The original production of The Captive was the talk and scandal of New York when it opened on September 29, 1926. The play’s forbidden love story was so controversial for the time that the entire cast was arrested for indecency.

In a return to site-specific work (Creditors, The Sea Plays), The PAC presents The Captive inside Society Hill’s Physick House. The historic free-standing townhouse offers an increased sense of intimacy for an immersive theatrical experience that leaves both the actors and the audience with nowhere to hide.

“We have a history of performing our Fringe pieces in historic locations around the city. Because The Captive is essentially a drawing room drama, we knew that we wanted a historic home,” said Hodge. “The Physick was a perfect fit for this show. It has a sense of class balanced well with an odd severity. Because the rooms are small, the audience will be right on top of the play, heightening the ‘fly on the wall’ experience.”

The Physick House will also help Hodge paint a picture of the polite society of the time where everything looks prim and proper on the surface but it is all a veneer. “Everything looks fabulous from the outside, but just under the surface there all sorts of secrets being kept,” added Hodge.

The Captive runs from Tuesday, September 1, 2015 through Sunday, September 20, 2015, with all performances at 8:00pm. Tickets are on sale for $25 (or $20 with student identification or under 25) by calling (215) 413-1318 or visiting www.fringearts.com/event/the-captive. For more information, please like “Philadelphia Artists Collective” on Facebook and follow @philartsco on Twitter.