Over 2,000 Butterscotch Krimpets Will Be Tossed From the Top of Eastern State Penitentiary for Bastille Day - Wooder Ice 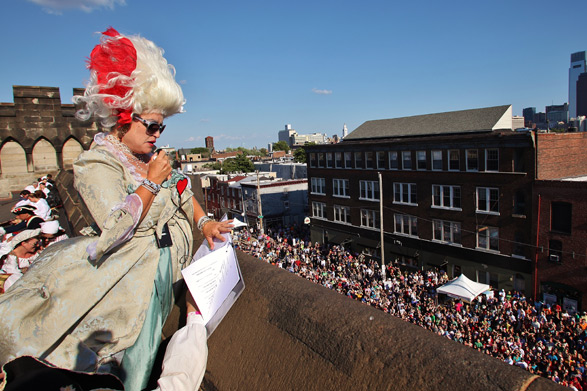 Over 2,000 Butterscotch Krimpets Will Be Tossed From the Top of Eastern State Penitentiary for Bastille Day

Over 2,000 Butterscotch Krimpets Will Be Tossed From the Top of Easter State Penitentiary for Bastille Day

Eastern State Penitentiary is teaming up with The Bearded Ladies, an experimental cabaret troupe, to present the entire French Revolution in an hour-long spectacle of song, dance, and raining Tastykakes for the penitentiary’s annual Bastille Day festival, to be held Saturday, July 15, 2017. Continuing with the annual theme of oppression and revolution then and now, the Bearded Ladies will connect past and present with a topical commentary on our political climate today. Guests can expect a show that is, as the Beards say, “both intellectual and accessible, entertaining and meaningful, stupid good and just plain stupid.”

This playful reenactment of the storming of Bastille will be emceed by the voice of Paris herself, Edith Piaf (portrayed by John Jarboe, Artistic Director of The Bearded Ladies), and will include appearances by Joan of Arc, Benjamin Franklin, Vladimir Putin, and a six-foot-tall French Baguette. The script will touch on Philly public school education, the American Healthcare Act, racial injustice, alternative facts, the travel ban, and the border wall.

This FREE performance will begin at 5:30 p.m. in front of Eastern State Penitentiary on Fairmount Avenue, and will culminate in a reenactment of the storming of the Bastille. French revolutionaries will storm the grim walls of “the Bastille” (Eastern State Penitentiary) and capture Marie Antoinette (portrayed by Terry McNally, co-owner of London Grill and Paris Wine Bar). The show will reach its climax as Marie mockingly cries, “Let them eat Tastykake!” and more than 2,000 Butterscotch Krimpets are flung from the prison’s towers onto attendees below.

The performance will take place on Fairmount Avenue, free and open to the public. Following the performance, local Fairmount restaurants will come alive with French-themed entertainment as well as food and drink specials, and the penitentiary will reopen for rare twilight tours at a discounted admission price ($8 online or $10 at the door).

A Cool Wine & Art Night “The Grape Escape” Is Coming to The Piazza at Schmidt’s Commons
“The Oval” is Back With Outdoor Movies, Beer Garden, Live Music, Family Activities & More!