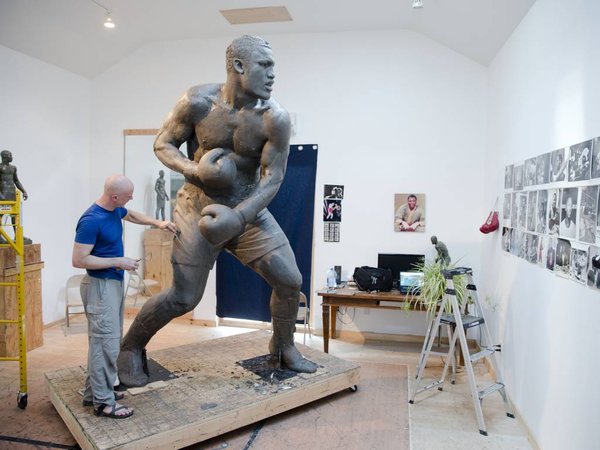 It’s pretty absurd that a city that produced one of the best fighters of all time doesn’t have a stature erected yet it has a statue of a fictional fighter.   The famous Rocky statue that now sits at the base of the Philadelphia Museum of Art, has lured tourist who line up just to snap a pic.  All the while Joe Frazier, a real life champion has since passed and has yet to me immortalized with a statue.

Well it looks like the city will put this controversy to rest, as the progress of finishing the 9 ft tall bronze statue of Frazier is almost complete.  There have been a few hiccups along the way such as lack of funding and the passing of the original sculptor.  Now in the hands of local artist Stephen Layne whose studio is located in Fishtown, the statue is slated to be unveiled this upcoming spring.

In an effort to develop it’s own following, the statue will be placed far away from the existing Rocky statue and will be placed at Xfinity Live.  The bustling sports complex will now have a monument to attract boxing fans from around the globe.  Frazier rose to fame after being the first man to knockout Muhammad Ali in 1971.  His famous bouts with Ali including “The Thrilla in Manila” are some of the most iconic bouts in the boxing world. Largely regarded as one of the top heavyweight boxers ever, Frazier’s statue is long overdue to say the least.  Since his passing due to liver cancer three years ago, family and supporters have been working hard to produce a statue to commemorate the late champ. In total the 1,800 lbs statue cost $167,000 which includes the maintenance fees.

Layne is scheduled to finish his clay molding by the end of September before being cast.  We will update you with the exact time and day of the unveiling as soon as it is made public.

Do you have an extra $17,500 a Month Laying Around? Then You Can Rent Chase Utley’s Penthouse
10 Events You Need to Attend in Philly to Make September Awesome