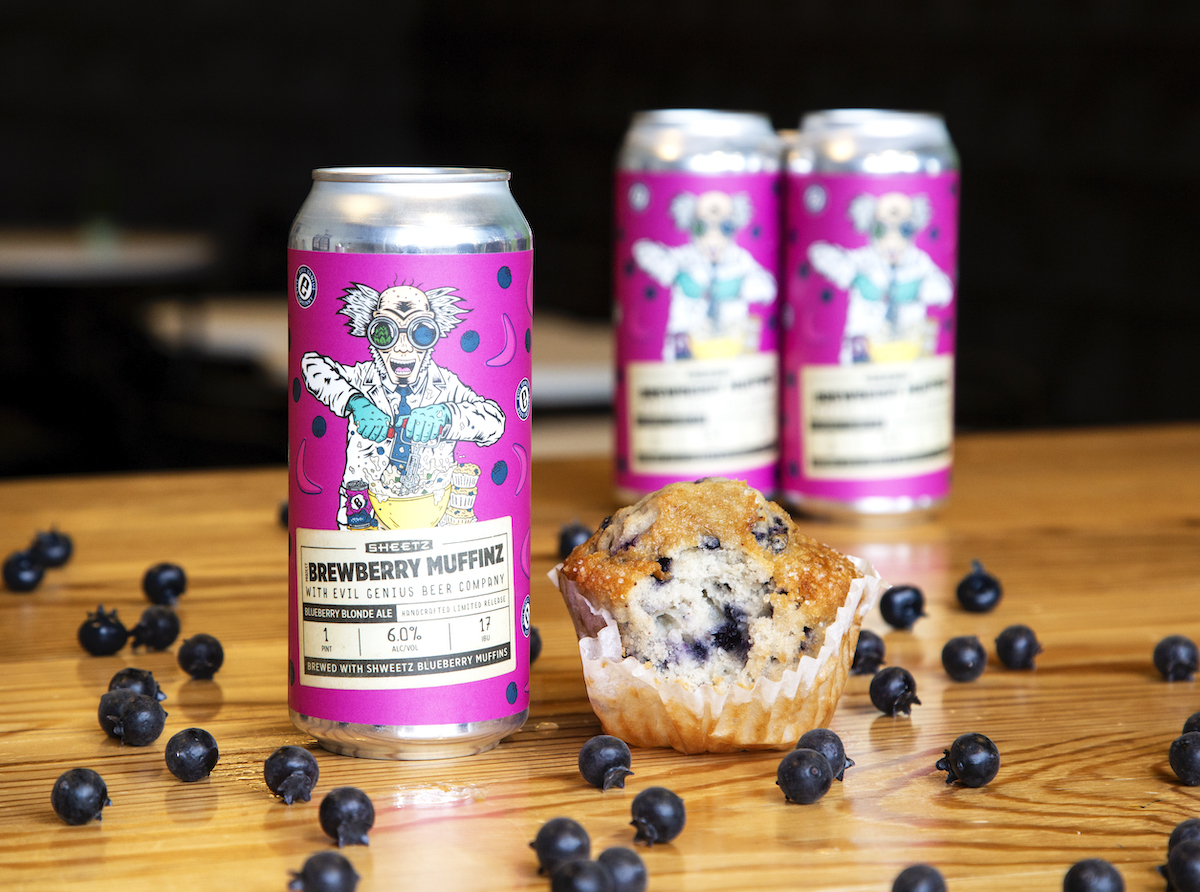 Today Sheetz, a major Mid-Atlantic restaurant and convenience chain, announced the release of “Project Brewberry Muffinz”, a new, limited-edition blueberry craft beer brewed in partnership with Evil Genius Beer Company. Available for a short time only, customers can purchase the beer at 99 Sheetz stores across Pennsylvania starting this Thursday, August 29 at 4p.m.

Following the success of Sheetz’s first-ever craft beer release in May, the new brew is a light-bodied blonde ale infused with Sheetz’s iconic Shweetz blueberry muffins. Sixteen ounce four-packs of Project Brewberry Muffinz beer will be available statewide including in Altoona, Erie, Harrisburg, Lancaster, Pittsburgh, State College and York, retailing for $7.99 per four pack. A small batch craft beer, Project Brewberry Muffinz will be available while supplies last and will not be restocked once sold out.

“Listening to our customers is a core value at Sheetz, which is why, following the overwhelming demand of our first limited-edition craft beer, we are thrilled to partner with Evil Genius Beer Company to announce the release of ‘Project Brewberry Muffinz’,” said Ryan Sheetz, AVP of Brand at Sheetz. “Furthermore, the timing is fitting, as we celebrate the anniversary of Pennsylvania’s Act 39 and the significant progress made since 2016. Three years later, Sheetz is selling beer and wine at over 160 stores and more are added every month.”

“Evil Genius Beer Company is incredibly excited to partner with Sheetz on Project Brewberry Muffinz,” said Evil Genius Beer Company Partner and Co-Founder Trevor Hayward. “As is Evil Genius tradition, we’ve taken a traditional style and turned it on its head by adding Sheetz delicious Blueberry muffins while brewing the beer. The results speak for themselves with an aroma that will remind you of fresh blueberries, and a taste that you make you want to head to your local Sheetz for one of their scrumptious Blueberry Muffins.”

Hayward also said: “We are honored to work with such a notable partner on another creative collaboration brew. Collaboration beers have been an area of tremendous growth for us and we love letting our creative juices shine in the process as we continue to make very serious beers with very silly names. As a bonus for this project, the partnership was the perfect pairing of our two companies as while our Tasting Lab is in the Philadelphia region, we brew our drafts and bottles in the heart of Sheetz country in Northeast Pennsylvania.”

Sheetz is committed to responsibly complying with all current laws and regulations, including the enforcement of a 100 percent proof-of-age policy. Employees will ask for proper identification, a valid driver’s license, passport or military identification card from any customers wanting to purchase alcohol, regardless of age. Each location also abides by time-of-day sales restrictions on alcohol.

Over 60 Restaurants Will Compete for The Best Burger in Philly at this Year’s Burger Brawl!
Manayunk is Hosting a Huge BBQ Crawl This Weekend