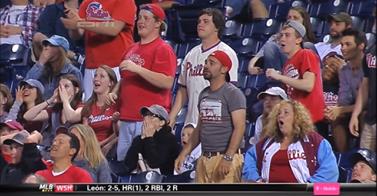 We recently came across this hilarious video of Dan Uggla’s game winning grand slam in the 9th inning of last night’s game versus the Braves.  The National League rivals were in town and apparently the Phillies were giving them hell until the 9th inning.

The video is slowed down with a funny musical soundtrack to add to the hilarity.  I am a Phillies fan but couldn’t help but laugh at this!

Is Mayweather Afraid of Pacquiao?
Viral: Check Out These Kids Priceless Reaction to the Walkman
To Top
Get the Coolest Philly Events & News Emailed to you Every Week!