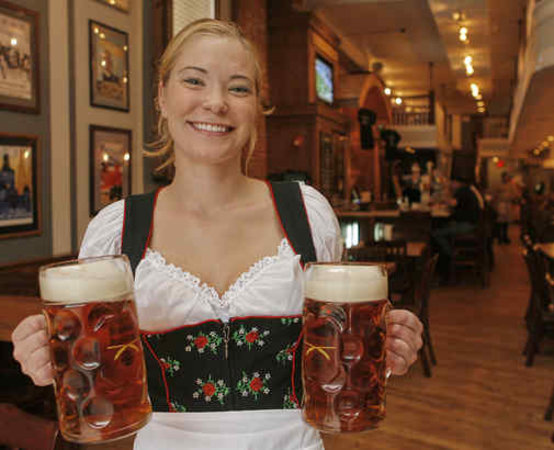 On March 24, 25 and 26, Philadelphia’s most authentic German bierhall Brauhaus Schmitz will host Starkbierfest, an ode to Munich’s second-largest beer festival, featuring 10-oz taster pours of 15 of Germany’s most iconic strong beers. The raucous party will transform their expansive Brauer Bund Bierhall into an Indoor Beer Barn, festively adorned in black and gold, where they will host five sessions over three days beginning at 5 p.m. on Friday, March 24. Admission is just $15 per person (click here to purchase tickets; $20 at the door) and space at Starkbierfest is extremely limited, with only enough room for up to 140 guests per session.

Each guest will receive his or her first strong beer included with the price of admission, plus a pretzel necklace and 10-oz. ceramic beer stein, branded with a decorative Brauhaus Schmitz goat (bock is the German word for goat). In addition, revelers will have access to fun German games and entertainment, including an accordion player and a live goat, available for photo opportunities and for petting purposes – and, as always, guests are encouraged to come dressed in traditional Dirndl or Lederhosen.

“At Brauhaus Schmitz, we are always thinking of new ways to identify and celebrate deep-rooted German traditions,” says owner Doug Hager. “We’ll be offering some of the best tasting and most underappreciated beers in the world at our inaugural Starkbierfest. We only ask that you please be responsible when drinking these extremely high ABV beers.”

While Munich – and Brauhaus Schmitz – are best known for their annual blowout Oktoberfest celebrations, Starkbierfest is a close second, and celebrates Germany’s darkest Bockbiers. The name Starkbier doesn’t refer to the supremely high alcohol content in the beers being served; instead, the name pays tribute to the beer’s Stammwürze or “original wort.” The historical origin of the fest traces its roots back to the Catholic religion and the days of fasting, when monks brewed stronger beers with more calories as a “liquid bread” of sorts to get through the Lenten fast. Today, few people fast, but many still indulge in strong, dark beers that are perfect for enjoying in the late winter and early spring.

Sessions will be held at 5 p.m. on March 24, as well as 1 p.m., 5 p.m. and 8 p.m. on Saturday, March 25 and 1 p.m. on Sunday, March 26. Tickets are limited, and available on a first-come, first-served basis. A special Fest Menu will be available for purchase to complement the libations.

One prized draft selection for guests to sample at Starkbierfest will be Samichlaus. Once considered the strongest and rarest beer in the world, Samichlaus is brewed only once a year and aged for 10 months before it is bottled, and the beer weighs in at 14% ABV. Other participating beers may include:

Continue Reading
You may also like...
Related Topics:beer, Brauhaus Schmitz