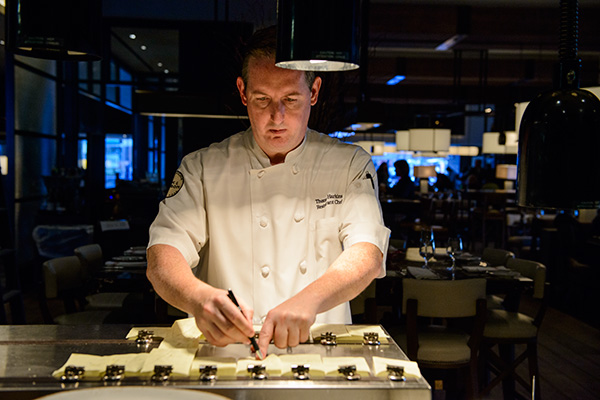 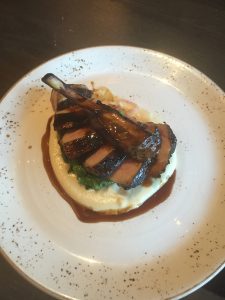 Forget everything you’ve ever known about hotel restaurants. Seriously, toss every preconception out the window and come with me on a culinary tour at Bank & Bourbon, located at 1200 Market Street on the ground  floor of the Loews Philadelphia Hotel.

I recently popped in to try out the many offerings on the brand new summer menu I had been hearing so much about. Chef Tom Harkins puts a modern touch on some classic American dishes, mixing just the right touch of creativity with simplicity. The focus is on farm-fresh, seasonal cuisine, and the summer menu is an absolute game changer, highlighted by summery vegetables and immensely flavorful proteins, which Harkins chars masterfully.

As the name suggests, Bank & Bourbon has an in-house barrel-aging program run by Bourbon Master (and Cocktail Whisperer) Paul Zuber – as it was a hot summer day, I opted for a refreshing Pimm’s Cup – a gin-based drink served with Pimm’s No. 1, fresh fruit and ginger beer.

The light fare options are perfect for sharing, so my party did just that. Among the favorites were the Cucumber Carpaccio  with lime, buttermilk, wasabi and dill; the Summer Lobster Salad with baby spinach, blister tomatoes on the vine and lemon crème fraiche; and the Taste of Ham , which consists of shaved Benton’s ham, Creminelli prosciutto and goat butter (sweet/creamy/grassy) over sourdough bread. 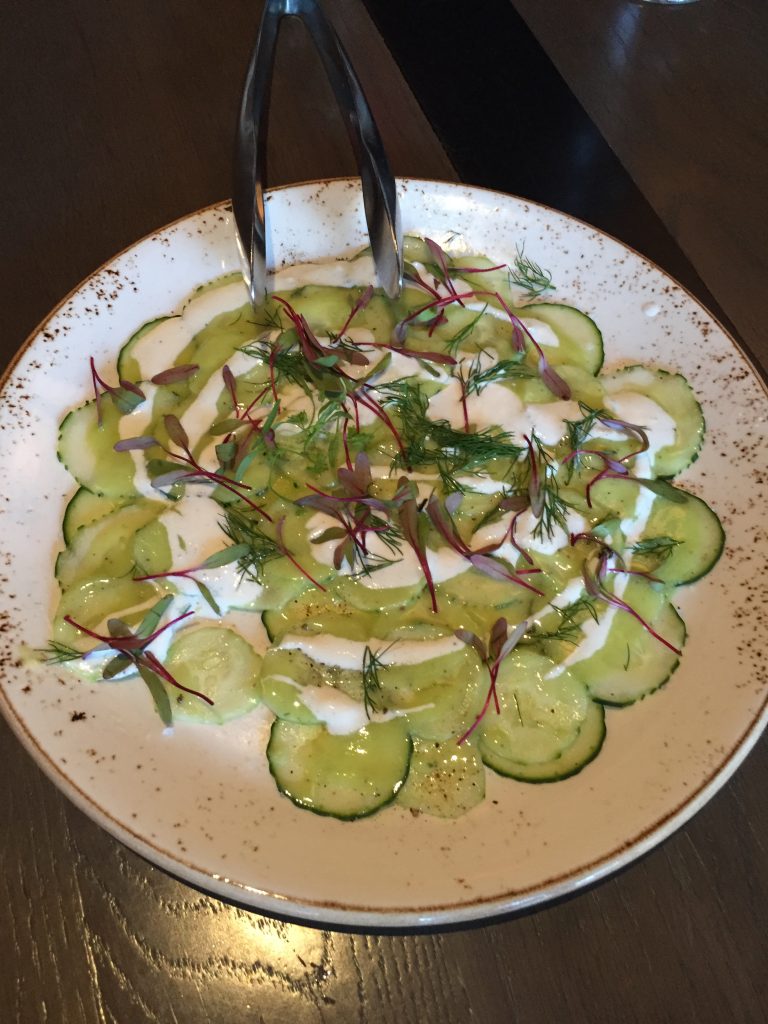 myself for not being introduced to it sooner – and the creamy, mozzarella-like burrata cheese that tops the Heirloom Tomato over anchovy toast dish.

Anyone who appreciates a nice char should try the Grilled Octopus which is accompanied by Shishito peppers (almost sweet-like), Yukon potatoes and charred green tomato. The Hamachi balances pickled plum with jalapeno, an avocado puree and ginger oil. If Crisp Pork Belly is a go-to of yours, Chef Harkins really elevates his interpretation with fresh apricots and kale over an onion soubise. The soubise is one of the first techniques Harkins said he learned while starting out as a chef – it’s a method of melting down the onions to take out the bitterness, and the result is a decadent, creamy sauce, of which I sopped up every last drop.

The seasonal fish offerings on this day ranged from Pacific Northwest Halibut (over a delicious artichoke barigoule), to Ahi Tuna with coriander-crusted fennel and peppers that were stewed for three hours, to Roasted Dorade and whole summer veggies. The beauty lies in the simplicity, with only a few ingredients in each of the fish dishes, but they are packed with deep flavor.

The Duck Breast is served with a mousse-like corn puree, nectarine, pea shoots and Cipollini onions, brined for six hours in a pickling spice and tons of herbs that create layers of flavor without overpowering the duck. Similarly, the Duroc Pork Chop comes with pickled red onion, mustard greens and a parsnip puree.

But alas, I’m burying the lead. Far too many restaurants these days try and lay claim to having the “best steak in the city” without even remotely backing it up. So when Harkins went there, I had to fight the urge to roll my eyes. Well, if you can take away only one thing from this review, trust me when I say that he means business. The 32-ounce Cowboy Steak is for two to share and is dry aged for 28 days, perfectly seasoned with a mouthwatering dark char that stayed medium-rare on the inside. Also offered is an 18-ounce bone-in NY Strip, which is actually wet-aged in a cryovac.

Finally, the desserts are all made in-house and all are delicious. However, the star is undoubtedly the Freshly Made Vanilla Doughnut, topped on this day with peach cobbler ice cream, brown butter crumbles and a whiskey caramel reduction. With apologies to nearby Beiler’s Donuts in the Reading Terminal Market and Federal Donuts in Rittenhouse, the next time a doughnut craving strikes, do yourself a favor and give Bank & Bourbon a try. You can thank me afterward. Or, save me some leftovers.

All in all, B&B is every bit a destination spot for your next dinner date night, whether you happen to be staying in the Loews or not. The service is top-notch, while Chef Harkins and his kitchen staff offer a creative yet approachable menu. Zuber’s bourbon and cocktail program is next-level impressive, and the dining atmosphere is still comfortable (and confident) enough to serve outstanding cuisine on dishware that reminds one of grandma’s house.

Continue Reading
You may also like...
Related Topics:bank and bourbon

10 Unique Burgers in Philly You Have to Try
6 Brand New Restaurants in Philly That You Need to Check Out!