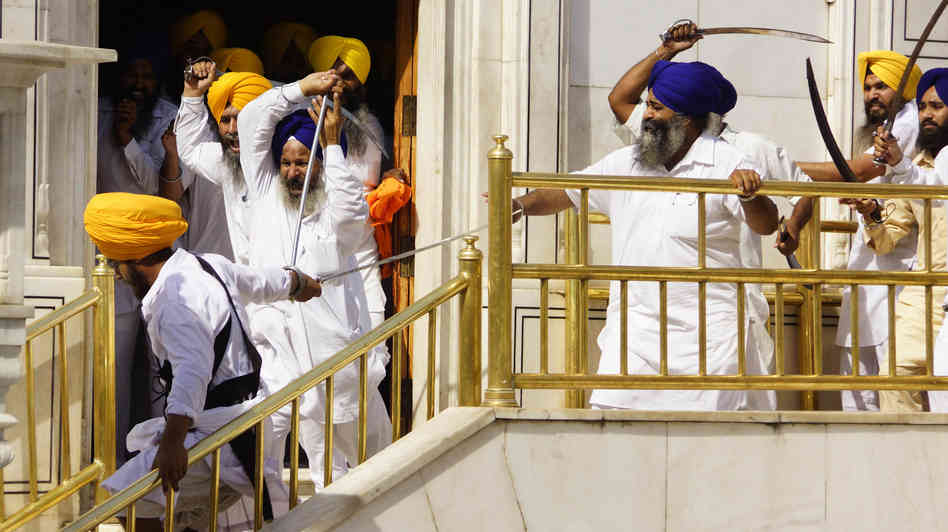 A huge sword fight breaks out at an Indian temple over who should speak first at a ceremony.  This is something straight out of pirates of the caribean but these folks are obviously not pirates.  However, the swashbuckling and swordsmanship is amazing.  I did not think I’d see a sword fight in 2014 that wasn’t on the big screen.  This is a gotta’ see it to believe it.

According to the Guardian:

“Hundreds of Sikhs gathered at the Golden Temple to honor the victims of a military raid on the shrine in June of 1984 that targeted separatists looking to establish a Sikh state. The Shiromani Gurdwara Parbandhak Committee is responsible for upkeep and security of several Sikh places of worship, including the Golden Temple, so it expected to address the huge crowd first. But a radical Sikh group forced themselves on the temple’s platform and tried to deliver a speech before. SGPC guards attempted to stop them, and swords were drawn when the group resisted. At least 10 were injured and nearly 50 detained by police as men in blue, orange and yellow turbans chased and stabbed each other throughout the temple’s marble staircases.”

Marlin Fan Gets Foul Ball, Gives it to a Cubs Fan who Gives it to Marlin Fan’s Son
Truck Driver Involved in the Tracy Morgan Crash is Claiming He’s a Scapegoat