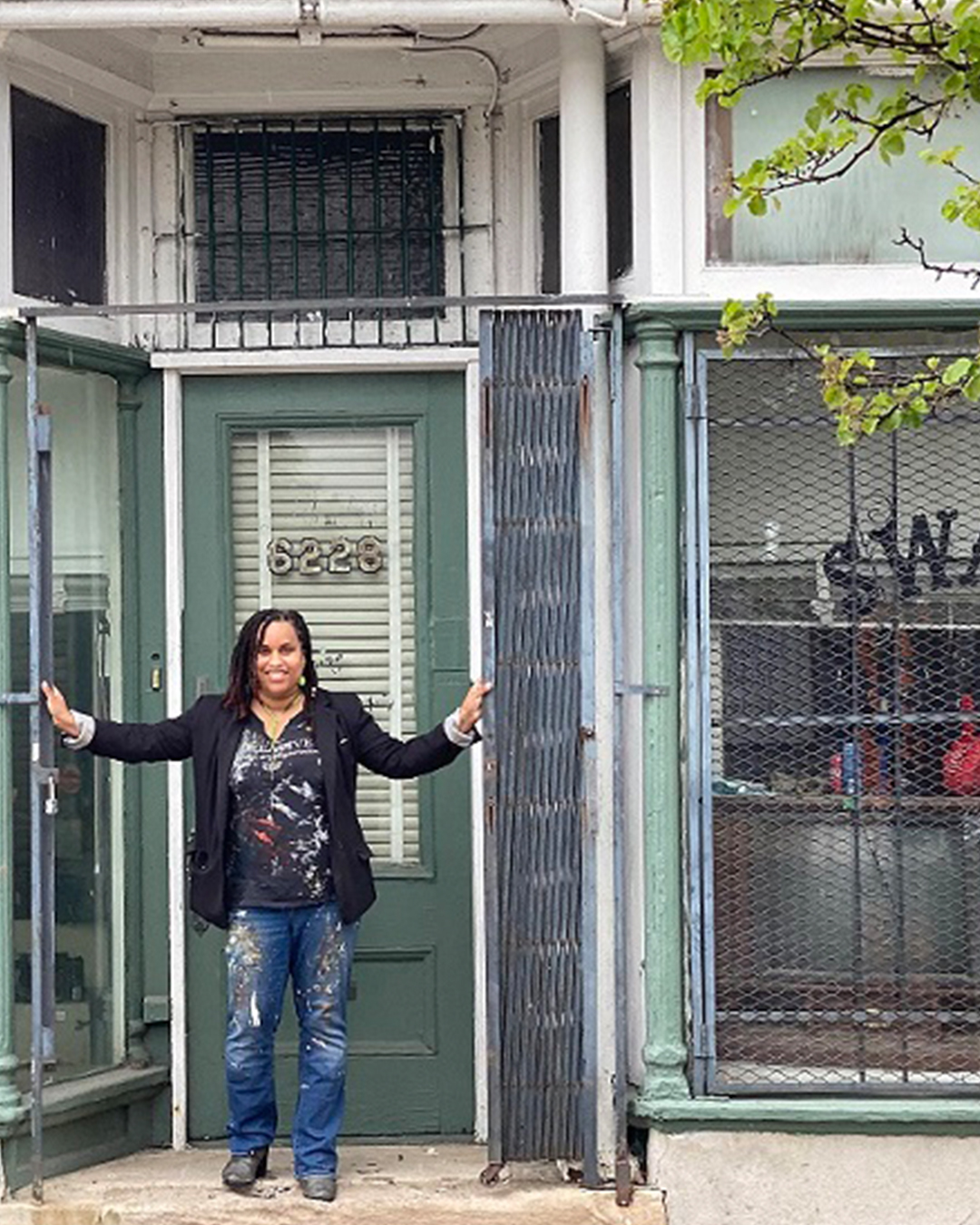 Philadelphia-based fine artist and entrepreneur Keisha Whatley has announced plans to renovate an historic building located at 6228 Germantown Avenue (on the border of Germantown and Mt. Airy) and transform it into Germantown ArtHaus — an artist-focused coworking space and café that will become a gateway to one of Philadelphia’s most historic neighborhoods.

“My vision is for the ArtHaus to be a creative hub and beacon of light in the community. By early fall, the building will become a place where artists and creatives are provided a platform to produce, share and sell their work and where the community can also come to create art, make new connections and relax while enjoying great coffee, smoothies and baked goods from local artisans,” said Whatley.

This community art studio has been a dream of Whatley’s for a decade. When she had the opportunity to purchase the three-story Victorian, which formerly housed several minority-owned businesses, she jumped at the chance. “We will be offering 3,100+ sq. ft. of space to the community. The “street level” first floor will house a café with art for sale; a lower level, with its own entrance in the rear, will be leased to a commercial or non-profit tenant; the second floor will offer three studio rentals for local artists and/or entrepreneurs; and the third floor will house a studio apartment with a roof deck to offer additional living space. Whatley has structured the artists’ studios two ways: Artists/entrepreneurs can lease a studio solo, paying rent monthly with a one year lease; or they can split the rent with a “studio-mate.” “Our idea is to make the spaces affordable, and our long-term plan is to raise money to offset some of the rent for the studios as well,” noted Whatley.

One of the reasons Whatley chose this property is because of its historical significance in the African American community. Built at the turn of the twentieth century and originally a pharmacy in the early 1900s, it was most recently a combination of accounting services and print shop owned by the Swain family, who were well-respected business and community leaders. “The fact that it was black-owned for decades and a fixture in the neighborhood intrigued me greatly, but I did not go looking for an historic building. I guess you could say it was happenstance. The Swain family purchased it in 1979, which was the year I was born. The exterior was already trimmed in green, which is my favorite color. And their daughter was using the second floor as an art studio already. The saying, ‘Coincidence is when God chooses to remain anonymous,’ was echoing in my head the whole time I was gathering all of these facts, and I knew early in the process that I was destined to purchase this building.”

Transforming Tragedy: A Gateway to Hope

Several exciting community projects are slated before the building’s official unveiling. The first, an artist summit, which kicks off May 18th will involve recruiting about a dozen artists to paint a mural on the west facing wall of the building, which Whatley says has been begging for a voice for decades. The mural’s theme, Transforming Tragedy: A Gateway to Hope, will focus on victims of police brutality. “Being a mother of two African American teenagers (one is male) made the creation of the mural theme a no-brainer. However, it was important to me that each story is told through a lens of hope; honoring the lives lost, memorializing the outrage those losses produced, and directing that honor and rage to a positive future. We see enough triggering imagery of death and violence in the world today. I didn’t want to wrap the building in grief. That is the antithesis of the energy that I envision for the space and for the community. It is imperative that the mural, while reflecting the underbelly of racism, offers the promise of hope, transformation and change,” she explained.

On the east facing wall of the building, Whatley will be organizing The Germantown Selfie Project — a mural collaboration which will engage students from elementary school through high school to paint their self-portraits onto the east facing wall. This “celebration of young community artists” will be organized this summer, when the budding artists are off from school and able to spend a few hours painting their images onto materials that will be affixed onto the building.

Whatley has launched a GoFundMe campaign with the goal of raising $150,000 to cover exterior and interior restoration costs for the 120-year-old structure. Three roofs and the exterior stucco are in serious disrepair. The west facing wall, where the community artists’ mural will be located, is crumbling and needs to be fixed prior to a mural installation. Whatley wants to preserve and restore as much as possible. The renovation budget is estimated at $185,000. Fundraising dollars will also go towards purchasing mural materials, art supplies and adopting and aiding a local school with an underfunded art program.

Giant Plans to Open a 32,000-square-foot Heirloom Market at the Old Strawbridge’s
Fishtown Social Reopening for Outdoor Dining; Still Donating Draft Wine Keg Sales to Charity
To Top
Get the Coolest Philly Events & News Emailed to you Every Week!