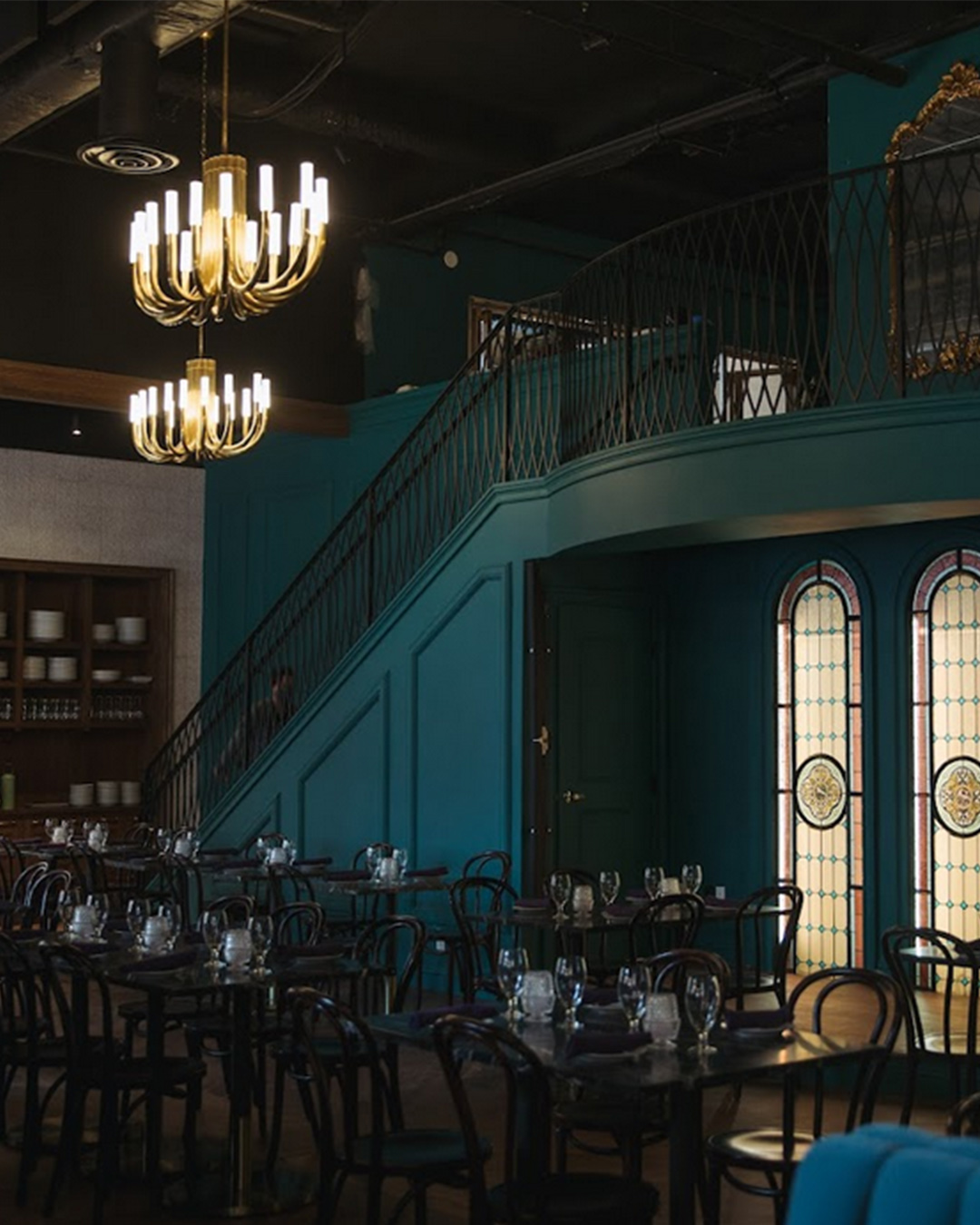 Restaurateur Jill Weber and her hospitality group Sojourn Philly are thrilled to announce the grand opening of REX at The Royal, Philadelphia’s newest destination for elevated Southern fare housed in the historic and recently rejuvenated Royal Theater, once celebrated as a locus of Black American culture, at 1524 South Street in Philadelphia. After soft opening, the restaurant will officially open to the public with expanded hours and full dinner and bar service beginning at 5 pm, on Thursday, October 28.

REX at The Royal, the impressive 7,000 square feet glow-up from its original concept, is distinguished by a sprawling dining room, massive turquoise top bar, and upper mezzanine, serving as a hub for the tight-knit community cultivated just doors away at the original REX 1516 location. The newest concept from Sojourn Philly, following the opening of Sor Ynez in March of 2021, looks forward to participating in the cultural and culinary rejuvenation of South Street following challenges presented by the past year and a half.

The restaurant’s robust menu, crafted by long-time Charleston resident Executive Chef Aaron Paik with culinary consultation from Chef Valerie Erwin, is comprised of traditional Lowcountry Southeast Atlantic cuisine including signature dishes such as Shrimp & Grits, Chicken & Dumplings, and Barbequed Beef and Beans plus an expansive raw bar with offerings including an impressive Shellfish Plateau, jumbo Shrimp Cocktail, and Lobster Salad. The greater menu is bolstered by past staples from REX 1516, as well as Southern staples like She-Crab Soup, with an extensive beverage menu formulated by Sojourn Philly Beverage Director Nick Baitzel.

In addition to all-new, grandeur design facets including a café offering artisan coffee and light bites and curated bottle shop adjacent to the 25+ seat bar, REX at The Royal also maintains stylistic tenets of The Royal Theater’s original design; with sweeping arches and a raised live music stage paying homage to the theater’s role in the rich history of early-20 th century Philadelphia.

“We are so excited to welcome in our neighbors and friends to drink, dine and commune at REX at The Royal,” said Jill Weber, Co-Owner and Co-Founder of both REX at The Royal and Sojourn Philly. “We are sure that Chef Paik’s inspiring menu, coupled with the fascinating history of The Royal Theater, make for a truly unforgettable dining experience with roots tied to American history – specifically, to the experience of Black chefs in Philadelphia.”

Through Chef Paik’s cuisine, REX at The Royal seeks to honor the great early-20th century African American chefs who adapted traditional Southern fare to the bustling urban landscape of Philadelphia, and to tell the story of early 1900’s Center City Southwest, which stood at the time the cultural center of Black American life, with the grand Royal Theatre as its anchor. The foundation of the REX at The Royal menu lies in the Lowcountry cuisine of the Southeast Atlantic coast, influenced as it was by the grains and traditions of the African diaspora melded with the local agriculture and fisheries.

“I’m honored to have been influenced by the culinary prowess and experience of Chef Valerie Erwin,” said Executive Chef Aaron Paik. “Collaborating with another Philadelphia-based chef who focuses on Southern fare helped my team and myself compose a menu that both showcases my past experience with Lowcountry cuisine, all while hearkening back to the influences that make Philadelphia unique.”

REX at The Royal will open at 5 pm, on Thursday, October 28 with a robust menu featuring appetizers such as Crab Fondue with Pretzels ($21), Fried Green Tomatoes ($11), and Mussel Salad ($13); entrees including   Frogmore Stew ($29) made with fish, mussels, shrimp, andouille sausage, potatoes, corn, spicy Old Bay brood and grilled sourdough, Bone in Pork Chop ($38), a 14-oz duroc bone-in pork chop alongside sweet and sour braised collards, served with apple butter and grain mustard sauce, and much, much more.

Hours of operation are as follows: Sunday through Thursday from 5 – 10 pm and Friday through Saturday from 5 – 11pm. Reservations are available by phone, or online through Opentable. Following the formal opening of the restaurant’s main floor, the café, bottle shop, and upper mezzanine dining area will be open for sales and service later this fall.