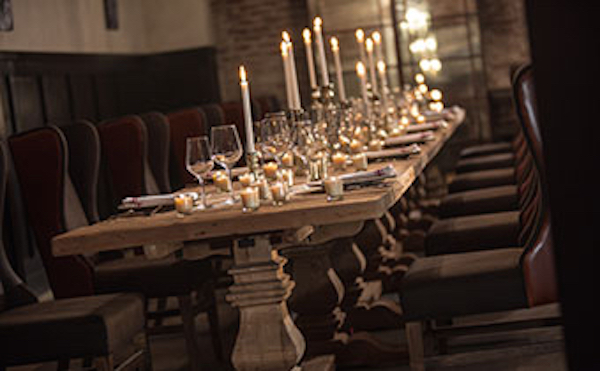 Red Owl Tavern and Brewery Ommegang Present  A Feast of the Seven Kingdoms DINNER IS COMING!

HBO’s Game of Thrones, based on George R. R. Martin’s Song of Ice and Fire, is a seven-book saga filled with tales of lust, greed, love, violence AND food. On behalf of the Seven Kingdoms, Red Owl Tavern’s Chef Jorge Chicas invites fans to celebrate the return of his favorite TV series’ Season 6 premiere with a feast fit for a King OR Khaleesi.

Guests are formally invited to a family style feast featuring select brews from Brewery Ommegang. This dinner is one night only, Sunday, April 17th and is limited to just 30 seats. The revelry will begin at 5:30pm with a reception in the subterranean Shanghai Room, which will be lit with candles and adorned with the flags of Game of Thrones clans. Chef knows it takes a strong stomach to be a fan of the blood-soaked fantasy and guests are encouraged to come hungry! Guests will enjoy dishes inspired by Chef’s favorite characters – Baratheon Boar Ribs with Dragon Peppers, Cersei’s Honeyed Cornish Hens, Sansa Stark’s Lemon Cakes, and Samwell Tarly’s Blueberry Ricotta Tarts – as well as the series itself, for $99 per person, all-inclusive. Additional menu highlights will include Lamb Chops with Mint Chimichurri Sauce, Smoked Chicken Wings, a Roasted Pigs Head, the Dead Man’s Roasted Vegetables, Spinach and Pomegranate Salad with Balsamic Vinaigrette, and Pentoshi Mushrooms in Butter and Garlic. Ommegang beer pairings include:

“The dinner will be a riot of fish, flesh and fowl,” says Chicas. “Feasts don’t always end well in Games of Thrones but we assure everyone will leave safely. And very, very satiated.”

Tickets can be purchased via eventbrite and includes a special Game of Thrones themed gift bag featuring a commemorative Ommegang stein. Interested parties are encouraged to act fast! The event is closed once the 30 tickets are sold. You can Purchase Them Here.