Porta Philly Is Taking Heat For Laying Off Employees Via Instagram and Asking Them Re-Interview! - Wooder Ice 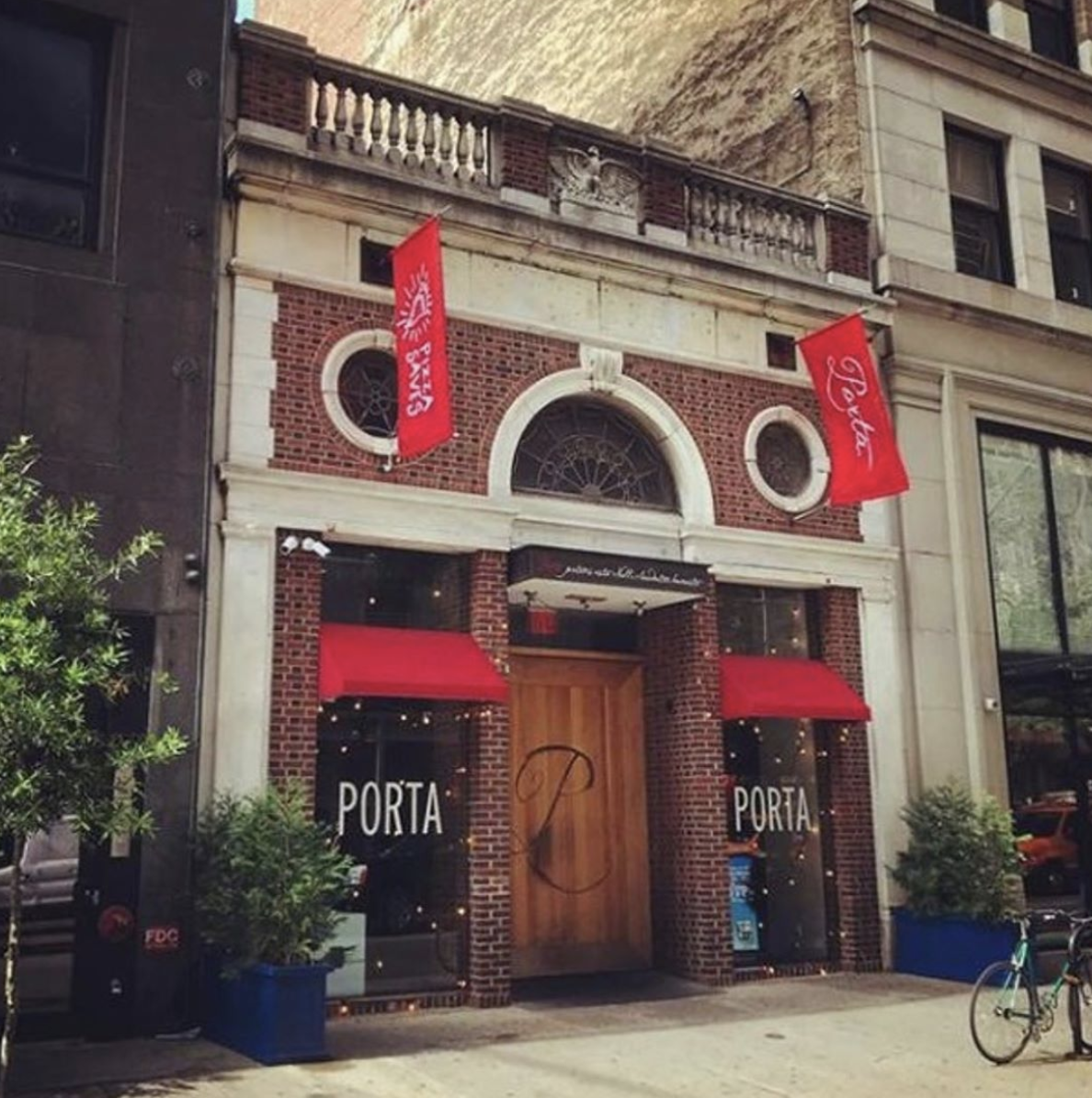 Porta Philly Is Taking Heat For Laying Off Employees Via Instagram and Asking Them Re-Interview!

Porta Philly Is Taking Heat For Laying Off Employees Via Instagram and Asking Them Re-Interview!

There’s no question that the COVID-19 pandemic has crippled businesses on a global scale.  Many are trying to weather the storms while others have already shuttered their doors. With these times of uncertainty it’s the employees who are left waiting and guessing.  However, after months of waiting the employees’ uncertainty at Porta Philadelphia was finally confirmed via an Instagram comment.

On Wednesday evening Porta posted a notice that both of their locations will be hiring at all positions.  This prompted some current employees to question whether or not their jobs have been stripped.  Porta Philadelphia responded with the following statement,  “…due to COVID, we laid off everyone in Smith, both in the restaurants and in headquarters.  So there are currently no employees of Porta Philly.  If you’re interested in returning to you job, please send an email to jobs@smithmade.org to let us know you’d like to return.”

It’s worth noting that in Porta Philadelphia’s IG profile there’s a link to a “Smith Employee Relief Fund” where it reads  “The Smith Employee Relief Fund was created to immediately support our dedicated teams during this time of need. 100% of proceeds will go directly to them. We ask everyone who is willing and able to please consider donating.”  To date the fund has raised $36,808.  However, many current employees are crying foul by saying that no-one has seen a dime of the nearly $40,000.

One ex-employee stated in the comments, “I would also love to know SPECIFICALLY who got the money from your Smith Relief Fund because everyone at PORTA PHL got a big fat nothing from it.”  The comment sections doesn’t get much better.  The majority of those commenting are calling the pizza spot classless and unprofessional (but with more profanity accompanying these additives).

Many ex-employees stated that there should’ve been a company-wide email stating that they were laid off rather than an Instagram comment.  Furthermore former employees of Porta do not feel that they should have to “re-interview” for their jobs.

“I am truly laughing out loud at the thought of being “re-interviewed” for a position I’ve held for a year and half,” stated an ex-exmployee while another commented, “I was part of the opening team at Porta Philly and worked there until last October. Smith Partners (who are at the restaurant pretty much every week and whom I served many many times) never bothered to learn my name even after 2 years, that should tell you something about company culture.”

Calls to Smith went unanswered so did our attempts to reach out for a comment via social media. See the posts and comments below.

🗣As we begin to reopen our locations, we are now hiring for all FOH & BOH restaurant positions at Porta Philly! 👉 Interested in joining our team? Send your resume to jobs@smithmade.org 📨 ✌️

We messed up. Our last post about beginning to hire again was meant to start building excitement for Porta Philly’s reopening plans, but we didn’t properly communicate with our former staff before doing so, which made it seem like we were hanging them out to dry. We’re very sorry about that – it was not our intention, and we understand how it could be taken that way. To be clear: All of our former employees will be given the first opportunity to be reinterviewed, before we interview anyone else. We are redesigning the operations of the restaurant, so we will have new positions that need to be filled. And although we don’t have a current opening date yet, we are committed to reopening Porta Philly’s doors in the near future. 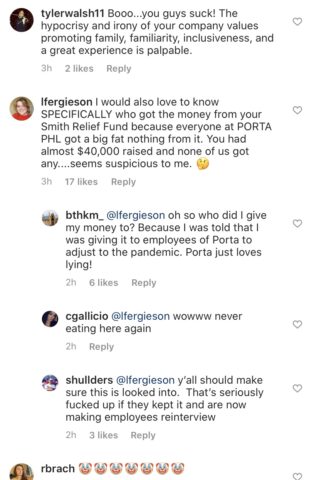 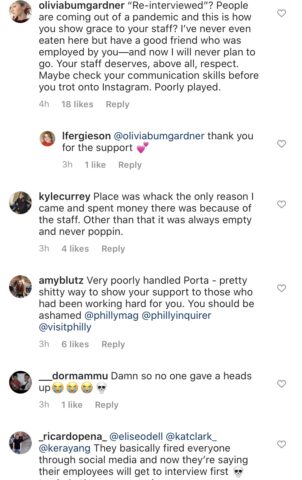 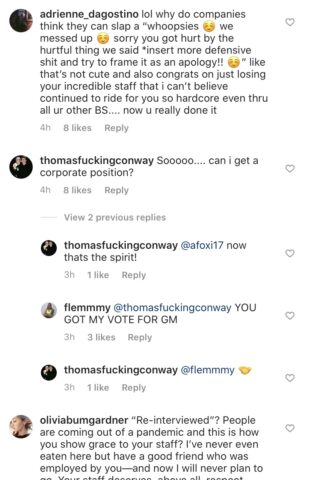 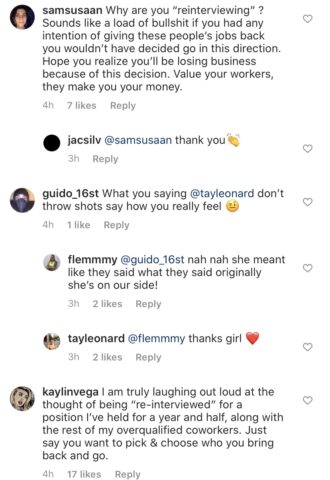 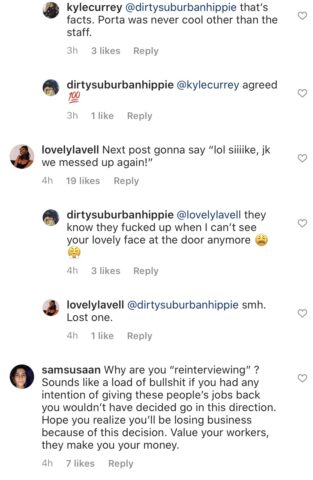 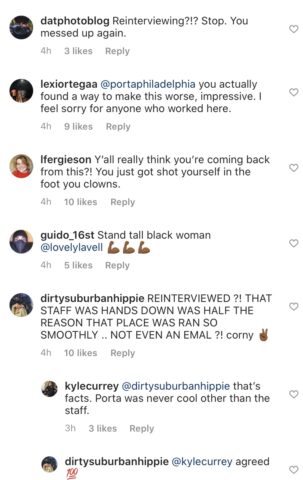