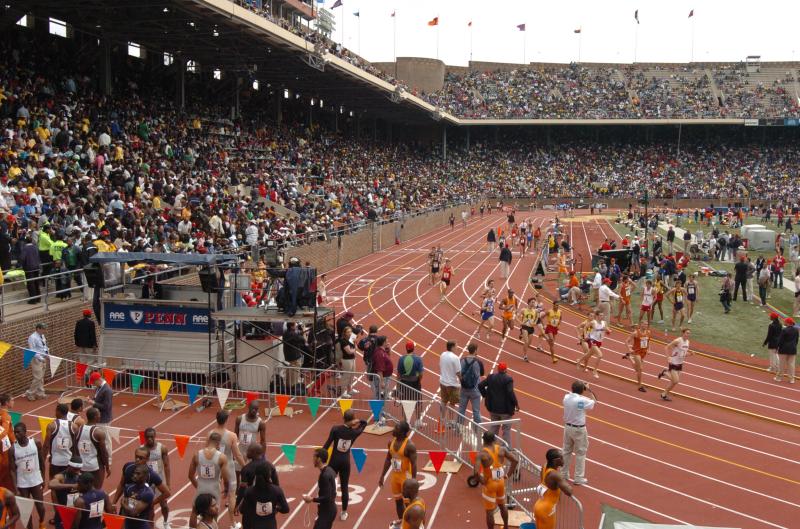 On April 21, 1895 the Penn Relays provided a place for the new competition of relay racing to be run, creating a milestone in sports history. The first team to win a Penn Relays championship was Harvard University men’s team defeating the University of Pennsylvania in the 4×440 yard relay. In 1910 the term Carnival was added to the name of the race to reflect the atmosphere created by the tent camps around the Franklin Field. In 1914 the Relays became an international event when Oxford University crossed the Atlantic to compete. During the modern era of the Relays over 15,000 male and female athletes compete in high school, college, Olympic development and professional races. Across the three days of competition over 110,000 fans travel to Franklin Field to watch the action. The Penn Relays have become a marquee event in Caribbean culture which was further intensified in 2000 with the first USA vs. the Worlds race. The race has become a fan favorite on Day 3 of competition, allowing fans to see some of the best runners in the world compete. The annual event has become the longest running track and field event in the history of the sport.

The first Penn Relays was a smash success. Held in conjunction with the University’s Spring Handicap Track and Field Games, the meet, now the longest uninterrupted collegiate track meet in the country, was a greater success than hoped for, drawing an attendance of approximately 5,000, the largest track and field crowd to that time in Philadelphia. At the dawn of the 20th century, track and field in the United States was centered around the three large eastern cities of Boston, New York and Philadelphia, so it is evident that in addition to being the largest track crowd in Philadelphia, it was immediately one of the largest ever in America.

But for all the event has done for the city of Philadelphia and the University of Pennsylvania, it is the change it wrought in the sport of track and field that is known worldwide.  Frank Ellis, who was the brainchild behind the creation of the Relays, spoke in Paris some 15 years after the idea became reality:

“As I look back now, I realize that the Relays we thus created made track training and competition not only more enjoyable but more significant as well.  Now four runners join for a common purpose: team victory. Individual effort is     still present but it is individual effort within and for the team.  If the team wins, each runner wins; if the team loses, each runner loses.  This is a great idea, the very essence of our American democracy, especially since this idea     always ends in action, not in mere words. This is, I believe, the great value of relay running.”

The Relays is an event that has changed with the times, sometimes even leading the way.  It was the first invitational track meet to prosper that welcomed all races and all schools from the outset and without interruption. The Penn Relays was the first invitational track meet with separate divisions for colleges, preps and high schools to show any degree of success and continuity.  Within five years of its start the Relays had added junior high school events as well as individual events, which included several of the great post-collegiate stars of the sport.