Head to the Penn Museum for Egypt Mania! - Wooder Ice

Head to the Penn Museum for Egypt Mania! 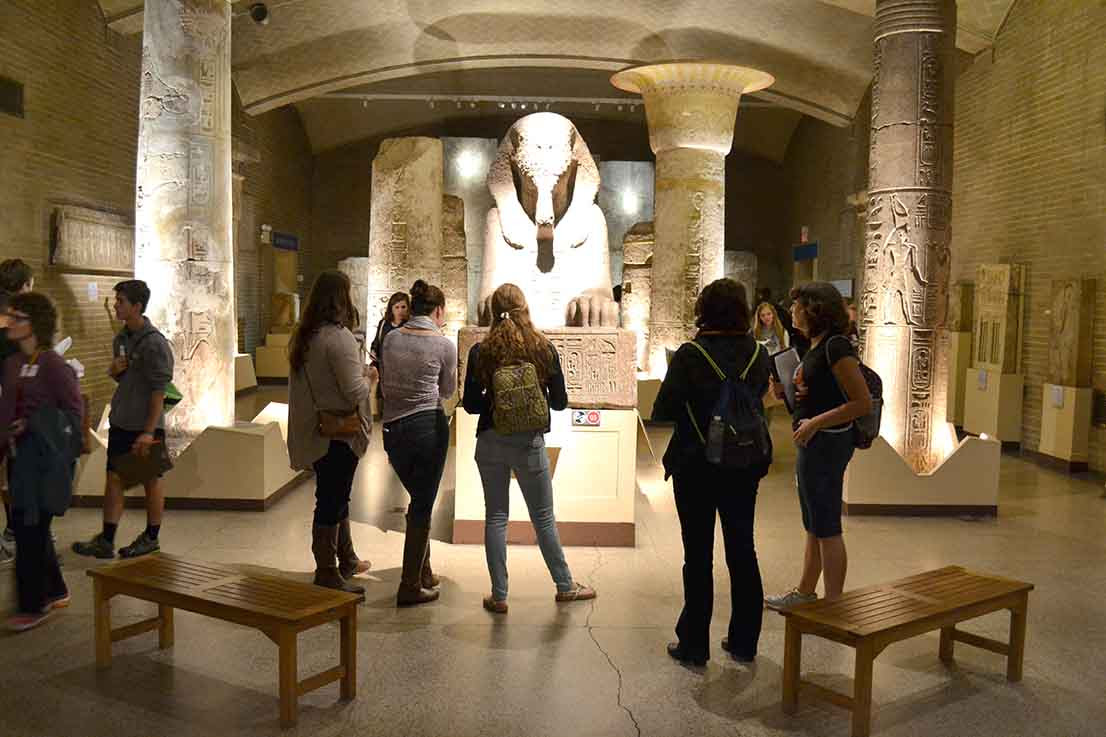 Egyptomania! takes place in and around the Museum’s world-renowned ancient Egyptian galleries, featuring monumental elements of  an ancient Egyptian palace, a 13-ton Sphinx, and art and artifacts representing 5,000 years of Egyptian culture.

SPOTLIGHT ON A TRAVELING SPHINX

One of the Penn Museum’s most beloved artifacts—an ancient Egyptian Sphinx that weighs in at about 13 tons—recently received the special attention of Josef Wegner and Jennifer Houser Wegner, long-time Associate Curators in the Museum’s Egyptian section, when they co-authored a new book, The Sphinx That Traveled to Philadelphia: The Story of the Colossal Sphinx in the Penn Museum. Written to celebrate the centennial of the arrival of the Museum’s massive granite Sphinx in 1913, the narrative of The Sphinx that Traveled to Philadelphia covers the original excavations and archaeological history of the Sphinx, how it came to Philadelphia, and the unexpected ways in which the Sphinx’s story intersects with the history of Philadelphia, the University of Pennsylvania, and the Museum just before World War I.  The authors will share stories from the book at a 1:00 pm talk, in front of the Sphinx. The Sphinx That Traveled to Philadelphia, published by the Penn Museum and distributed by the University of Pennsylvania Press, is available for purchase in the Penn Museum shop.  A book signing follows the presentation.

At Egyptomania!, guests are invited to become mummification experts, with Mummy Makers workshops are offered at 11:30 am and 2:00 pm. These science-rich experiences, drawn from the Museum’s popular “Unpacking the Past” programs for Philadelphia middle school students, invite participants to assist Museum educators as they move through the mummification process on a custom-made dummy mummy. Activities include brain removal, evisceration, desiccation, and the weighing of the heart ceremony.

Ancient Egyptians had a high regard for cats, and mummified many animals including cats, birds, dogs, and crocodiles. An “Animals of Egypt” guided family tour departs at 12:00 pm, winding through the Egyptian galleries to find animals that were highly revered in ancient Egypt.

Guests are invited to learn how to read and write ancient Egyptian hieroglyphs during workshop at 1:30 pmand again at 3:30 pm. Both sessions explore the distinctive script that ancient Egyptians used for nearly 4,000 years, inscribed on papyrus, carved in stone, on tomb and temple walls, and used to decorate objects for  daily life. The 1799 discovery of the Rosetta Stone finally offered a key to the modern understanding of this script.

At 11:00 am and 2:45 pm, Egyptomania! guests can test their knowledge about Sekhmet, Horus, Bastet, and other Egyptian deities in a “Name that God” game.

Throughout the afternoon, visitors may stop by at a craft station to create mummies and wesekh necklaces to take home. The wesekh is an ancient Egyptian collar necklace worn by men, women, and mummies alike. Children can also crawl through a simulated Egyptian tomb, and participate in a scavenger hunt.

In the Artifact Lab: Conserving Egyptian Mummies is an exhibition and laboratory that invites guests to observe conservators as they clean, restore, and preserve ancient funerary objects and mummies. Between12:30-1:00 pm and 3:30-4:00 pm, the conservators open their lab window to answer visitors’ questions about their work. The lab maintains a blog to keep visitors updated on their work, including the crocodile mummy and a falcon mummy currently in the lab.

Senior Archivist Alex Pezzati takes Egyptomania! guests on a trip back in time to some of the Museum’s early Egyptian excavations in the Penn Museum Archives during a 1:30 pm “Unearthed in the Archives” talk. The informal chat provides a behind-the-scenes perspective to the Museum’s research, based on expedition records, vintage photographs, manuscripts, personal letters, and much more.

The American Research Center in Egypt, Pennsylvania Chapter, joins in the celebration by waiving admission to its Annual Korsyn Lecture at 3:30 pm. Andrew Oliver, art historian and former director of the Museum Program at the National Endowment for the Arts, presents “American Travellers on the Nile: Early US Visitors in Egypt, 1774-1839,” a discussion of the factors which made Egypt a relatively easy and safe country for travelers of all nationalities after the War of 1812.

There are more than 42,000 artifacts in the Penn Museum’s Egyptian Section, one of the largest collections of Egyptian and Nubian material in the United States, featuring material that spans an extraordinary 5,000 years of ancient Egyptian history. A 15-ton sphinx, the largest in the Western Hemisphere, and monumental architectural elements from the 1200 BCE palace of the Pharaoh Merenptah, grace the Egypt (Sphinx) Gallery. The Museum’s finest examples of Egyptian sculpture are exhibited in the third floor Egypt Gallery. The material on display, including carved relief, stone coffins, and exquisite three-dimensional sculpture, testifies to the superb craftsmanship of Egyptian artists and sculptors throughout Egypt’s long history. A side exhibition, Amarna: Ancient Egypt’s Place in the Sun, offers an exploration of the metoric rise and fall of the boyhood home of Pharaoh Tutankhamun.

12:30 pm – Chat with Museum conservators as they work on mummies and more inside In the Artifact Lab

1:00 pm – Curator talk and book signing: “The Sphinx That Traveled to Philadelphia: The Story of the Colossal Sphinx in the Penn Museum” with Josef Wegner and Jennifer Houser Wegner, Associate Curators in the Museum’s Egyptian Section

1:30 pm – “Unearthed in the Archives” with Alex Pezzati, Senior Archivist

3:30 pm – Chat with Museum conservators as they work on mummies and more inside In the Artifact Lab